Boston, Massachusetts – From protest and political change in Libya to devastation in the wake of Hurricane Katrina, photojournalists undertake grave risk to capture the pivotal moments in history.

celebrate that mission in 101 Photos for Press Freedom, an exhibit from March 21 to April 30, 2012 in The Art Institute of Boston Gallery, 700 Beacon Street, Boston. 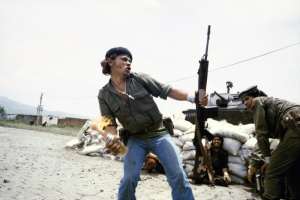 The exhibition’s 101 images convey war, revolution, and other world events that have unfolded since 1947. The exhibit and related events honor the 25th anniversary of Reporters Sans Frontieres (Reporters Without Borders), an international organization that advocates freedom of the press, founded in 1985 by Robert Ménard, RonyBrauman and journalist Jean-Claude Guillebaud.

The internationally renowned Magnum photo agency in Paris gathered 101 photographs donated by its members for the exhibit, which is free and open to the public. 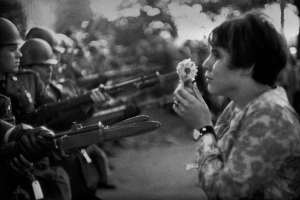 “The Consulate General of France is happy to have contributed to this exquisite photo exhibition. Not only do these pictures brilliantly illustrate the big questions of today’s world, but they also invite the spectators to reflect upon freedom of expression to which France and the United States are committed” said Mr. Christophe Guilhou, Consul General of France in Boston.

“It may be impossible to over-estimate the impact photographic images have on our perception of events throughout the world. They have the capacity to not only bring us to the center of the struggles of our fellow man a world away, but also to shed incontrovertible light and truth where issues and passions are complex,” said Stan Trecker, Dean of the Art Institute of Boston at Lesley University.

“We’re delighted to presentthis exhibit, and to engage in a conversation about the incredible adventure and risk undertaken by photographers in some of the worlds most dangerous places,” said Trecker. “We celebrate ‘Freedom of the Press,’ going far beyond the ideal to the brass tacks of what it takes in practice under difficult circumstances, and the need to protect it.” 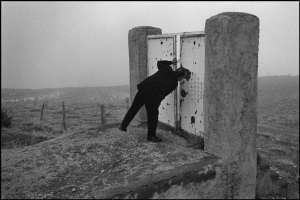 The exhibit is co-sponsored by: The Art Institute of Boston at Lesley University and the Consulate General of France in Boston in collaboration with Magnum Photos, Paris and the Photographic Resource Center. These events are sponsored in part by the Massachusetts Cultural Council, Reporters Without Borders; Edenred; BioMérieux; Best of Boston/Boston Coach; Veolia Energy and Ipsen Biomeasure.