The Café des Entrepreneurs #11 will take place on November 4, 2015 from 6pm to 8:30 pm! Meet Eric Stevenson, Director for the Americas of Aldebaran Robotics and 5 of the young leaders who are the 2015 Winners of the French Edition of the MIT Innovators Under 35!

The partners of the Café des Entrepreneurs are glad to welcome Mr. Eric Stevenson, Director for the Americas of Aldebaran Robotics.

Mr. Stevenson will be interviewed by François Ducroux, former head of the French-American Chamber of Commerce of New-England (FACCNE).

The interview will be followed by an exclusive panel discussion with the French "Innovators under 35" MIT Tech Review Award recipients. 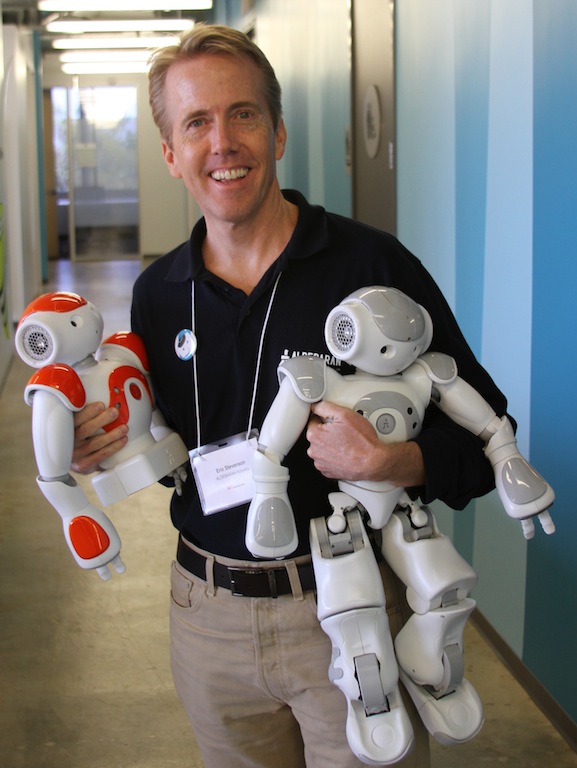 Eric Stevenson is Director for the Americas for Aldebaran Robotics. leading sales and operations for the US and Latin American region. Prior to Aldebaran, Eric worked for Hewlett-Packard EMEA in a variety of sales and marketing leadership roles across the company’s portfolio of hardware, software and services. He also has previous experience with Bain & Co. and Procter & Gamble. Eric earned an MBA from IMD in Lausanne, Switzerland.

Established in 2005, with offices in France, China, Japan and the United States, Aldebaran designs, produces and sells interactive and emotional humanoid robots. Aldebaran currently has over 450 employees involved in the development and production of robots. Aldebaran believes in a future where interactive, communicating robots will accompany humans in their jobs, their homes and with their hobbies, their family life. Today Aldebaran has three robots: NAO, Pepper and Romeo.

Meet 5 of the young leaders who are the 2015 Winners of the French Edition of the MIT Innovators Under 35. They embody this generation of bright people, who dream big, are open to the world and welcome the ideas of others. They show that France is breeding a new generation of entrepreneurs equipped to provide the most innovative solutions to the world’s problems. See for yourself!

Our round table with these young leaders will be followed by a conversation with Eric Stevenson, VP for Americas of Aldebaran Robotics, a company launched in France and a demonstration with one of Aldebaran humanoid robots!