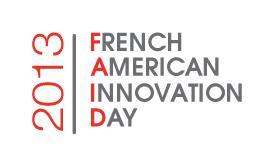 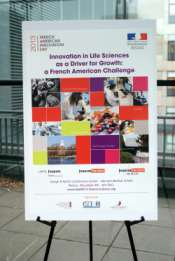 December 5th and 6th - More than 150 people attended the 2013 French American Innovation Day, a two-day conference at the Joseph B. Martin Conference Center at Harvard Medical School, which was organized by the Office of Science and Technology of the Embassy of France in association with Inserm Transfert SA.

Focused on innovation in life sciences, the 2013 edition of the FAID, addressed how investment and initiatives in this sector may lead to the overall growth, expansion, and recovery of the economy for the benefit of patients. Above all, this years roundtables explored novel ways of ensuring efficient collaboration on the the concept of open innovation between partners.

Fabien Fieschi, Consul general of France in Boston, kicked-off the conference on December 6th with a welcome address on the importance of innovation in France and in the United States. Furthermore, he underlined the importance to analyze the concept of enhanced innovation in Life Sciences as an economic force for growth.

Under the title “Innovation in Life Sciences as a Driver for Growth,” the seminar broke down into 2 days:

As a whole, the 2013 FAID was designed by and for the stakeholders in R&D, technology transfer, strategic alliances and funding/venturing in Life Sciences from both countries.

FOR MORE INFORMATION ABOUT OUR PARTNERS:

Founded in 1964 the French National Institute of Health and Medical Research (INSERM) is the only public French science and technological institute dedicated to biological and medical research to improve human health, boasting over 15,000 researchers, engineers, and technicians.
Read more at www.inserm.fr

Founded in 2000, InsermTransfert SA is the private subsidiary of the French National Institute of the Health and Medical Research (Inserm), dedicated to technology transfer (from invention disclosure to industrial partnership). www.inserm-transfert.fr

Inserm Transfert Initiative is a seed-capital company that has raised €35.5 million in new funding in 2012. It focuses on providing seed capital for innovative young companies in the biomedical field. www.it-initiative.fr

About the Office for Science and Technology of the Embassy of France in U.S.A. (OST)

Innovation is the main economic driving force of the New England economy, and many indicators testify of this vitality: Massachusetts stands among the six leading states, as far as new technologies and innovation are concerned. The excellence of research that is performed in universities, as well as the ambitious public programs designed to support the development of new technologies, and a dynamic community of investors and entrepreneurs, are the ferments of New England’s economic success. France also deserves its reputation as one of the world’s leading countries in terms of research and academic excellence, which explains the importance of our cooperation with New England.

The Office for Science and Technology’s mission consists in fostering cooperation between companies, entrepreneurs and actors of research and technology transfer on both sides of the Atlantic, and in supporting initiatives that facilitate collaborations in research and innovation.