The French minister of Industrial Renewal, Arnaud Montebourg, was in Boston on November 17 and 18, 2013.

During his official visit, the Minister visited the production site of the American biotechnology company, Genzyme, who was acquired in 2011 by the French pharmaceutical group, Sanofi. Genzyme is a global scientific leader on the treatment of the rare Gaucher’s disease, a genetic disorder in which a person lacks an enzyme called glucocerebrosidase. At the company, he met with American entrepreneurs who already have established businesses in France or have upcoming investment projects in the country with the purpose of promoting the different French territories’ economic attractiveness and the recent economic reforms put forth by Hollande’s administration that seek to reinforce France’s worldwide competitiveness.

The Minister also visited the Massachusetts Institute of Technology (MIT), one of the most prominent higher education institutions in the world in the field of innovation. In particular, he attended a meeting with MIT’s president, Rafael Reif, in order to explore various ways to strengthen collaborative ties between France and MIT, most notably in the context of France’s recent implementation of 34 government initiatives for the New Industrialized France. 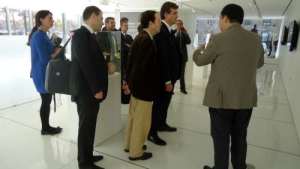 In addition, the Minister visited the MIT Media Lab (one of MIT’s institutes dedicated to multimedia and technology research projects) where he discussed a research project in the field of urban mobility and a partnered research study between CNRS-MIT in the field of multi-scale physics, which is directed by Doctors Franz-Josef Ulm and Roland Pellenq. The Minister had the opportunity to meet and interact with young French and American MIT researchers, who had all previously spent time working at France’s top enterprises and scientific laboratories. 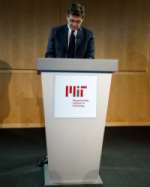 Minister Montebourg finished his visit with a lecture at MIT’s Media Lab, where he presented to students and professors France’s priorities on industrial policies. These policies arise from the French government’s 34 initiative plan for the New Industrialized France that focuses on cutting-edge innovation, production, and new technologies including ultra-fast trains (TGV), electric airplanes, digital hospitals, fuel-efficient or self-piloted cars, and innovative textiles, among other projects.