From April 16 to April 19, Mr. Roland Ries, Mayor of Strasbourg, along with a delegation of officials, made his fourth official visit to Boston in order to take the cities’ partnership a major step forward, and to support the Alsaciens sportsmen and women who, for the third year in a row, came to run the Boston Marathon, raising money for the Metropolitan Boston Housing Partnership and Massachusetts General Hospital’s Emergency Response Team. This visit aimed at strengthening the already firm relations between the two cities in the economic, academic, cultural & artistic areas. This visit marked the 55th anniversary of the twinning.

The Mayor of Strasbourg, Mr. Roland Ries, made his fourth official visit to Boston between April 16 and April 19, to celebrate the 55th anniversary of the twinning between the two cities. 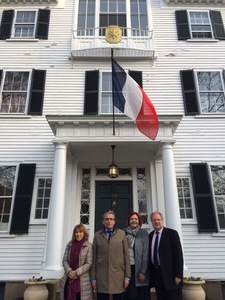 Mr. Roland Ries, Mayor of Strasbourg was accompanied by: 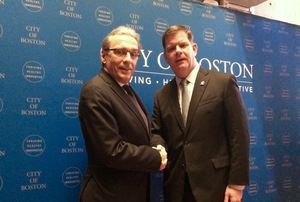 On April 19, at 9:30 am, at Boston City Hall, Mr. Roland Ries, along with the delegation from Strasbourg, met with Boston Mayor Martin Walsh. This was a very productive meeting which led to the two Mayors’ reassertion of their common and steadfast will to take the cities’ twinning a major step forward in economic, academic, cultural and artistic areas of cooperation. In particular, Mr. Walsh, who is currently working on a new transportation plan for the Boston region, has said to be highly interested in setting up an exchange of experience & knowledge with the city of Strasbourg in the field of urban mobility. Mr. Ries has therefore invited Mr. Walsh to come to Strasbourg at the beginning of 2017 in order to implement this new development in the cities’ partnership, maybe through the signature of a new declaration. Mr. Walsh’s visit will be preceded by technical exchanges between the two cities’ Offices of Transportation Planning, the Consulate General of France in Boston serving as a mediator between Boston and Strasbourg. 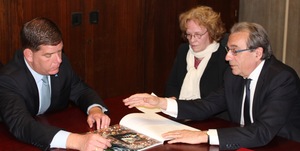 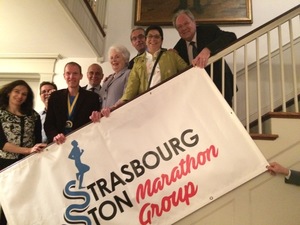 For the third year in a row, four Strasbourgeois sportsmen came to Boston to run the Marathon in order to raise money for the Metropolitan Boston Housing Partnership and Massachusetts General Hospital’s Emergency Response Team. On Saturday, April 16, a cocktail reception was held in honor of the Marathoners by the Boston Sister City Association, with Mary Louise Burke, President of the Association in attendance, which aims at keeping the relationship between Strasbourg and Boston vivd by promoting the Alsatian culture in Boston and developing exchange opportunities. On Marathon Monday, the Delegation made the trip to Mile 17 and to the finish line in order to support their runners, Christian Brechbiel, Christian Moritz, Steve Muller and Denis Lecras, all four of them finishers of the 2016 Marathon. 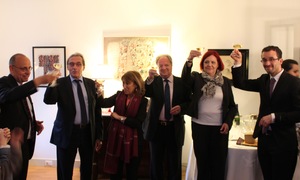 This grand day was followed by a reception of the Consul General’s residence, in honor both of the Strasbourgeois Delegation and runners, and of the French marathoners who ran, thanks to Boston Marathon Bombings Survivor Anthony Wrubel, to raise money for GiveForFrance, a Fondation de France charity dedicated to helping victims of the Paris Terror Attacks and healing from terrorism.

The economic scope of the visit was of utmost importance, in particular, as regards the fields of biotechnologies, high-tech and precision medicine, both cities being pioneers in these scientific & economic areas in their respective countries. On Monday, April 18, the Strasbourg delegation indeed visited both the French Tech Hub, a subsidiary of Paris Region Entreprises, dedicated to helping French tech companies efficiently enter and accelerate growth in the US, and the Cambridge Innovation Center, a Boston-Cambridge operated firm helping entrepreneurs leading fast-growing companies succeed since 1999. – many Alsatian firms figure among their clients (Anagesis Biotechnologies, e.g.). On the same day, the Delegation also met with some of the most active economic actors on the French-American scene in New England, having a talk with Bostonian members of FACCNE, and attended a cocktail & networking reception at the Consul General’s residence with major local actors from the cultural, entrepreneurial and academic fields in attendance. On the next day, the strain to strengthen of the two cities’ economic partnership continued with a visit of the newly-opened Roxbury Innovation Center, a landmark project for the city of Boston, dedicated to supporting local economic development by encouraging innovation and entrepreneurship. Christopher Moore, Manager of International Partnerships for the City of Boston, Alessandra Brown, Program Manager for the Roxbury Innovation Center, and Ben Bradford, Government Relations Coordinator at the Massachusetts Life Science Center – a partner of the BioValley life science cluster – attended the visit, demonstrating the strong and mutual interest to further develop economic and scientific cooperation between the two cities.

On Tuesday, April 19, the Strasbourg Delegation met with Mr. David Quigley, Dean of Boston College, to revitalize the partnership between the University of Strasbourg and Boston College, and with Mr. Elmendorf, Dean of the Harvard Kennedy School of Government, and Suzanne Cooper, Academic Dean for Teaching and Curriculum at HKS, to explore the possibilities of a partnership with the Strasbourg-based École Nationale d’Administration. 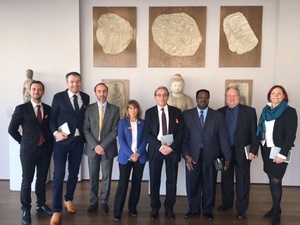 The first two days of the official visit, April 16 and 17, were driven by cultural discoveries with the visits of Boston’s Museum of Fine Arts – whose School of Arts offers a partnership with Mulhouse-Strasbourg’s Haute École des Arts du Rhin – and of Cambridge’s Harvard Art Museums. 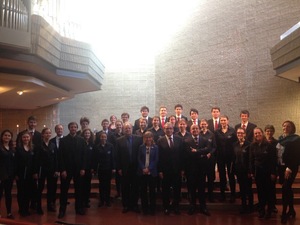 The Delegation, along with the Consul General, also attended a concert of the Petits Chanteurs de la Maîtrise de l’Opéra national du Rhin at First Church in Boston, on Sunday morning, a concert celebrating the 55th anniversary of the twinning, and a second one of Early Music, on the same day, by the prestigious Boston Camerata, whose artistic director is none other than Strasbourgeoise Anne Azéma.

The visit was deemed a true success by all parties and will, undoubtedly, greatly help the cities’ partnership take a major step forward.

Please find all the pictures of the official visit on our Facebook page.