On April 25, at 6:30 pm, Philippe Apeloig, the French renowned designer, will give a talk at Le Laboratoire Cambridge about his thirty-year long career and his disruptive views on typography. This event is part of the French Design Today series of conferences. 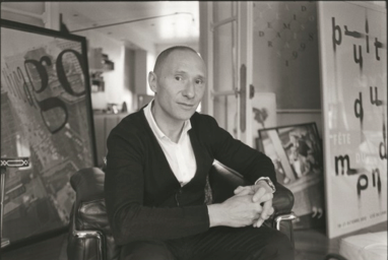 A legend of French design, Philippe Apeloig (b. Paris, 1962) is known for his thorough and experimental use of typography. He creates unique typographic designs and complex posters for a wide range of clients, from major French cultural institutions (Musée d’Orsay, Louvre Museum) to nonprofits, governmental agencies, publishing houses (Phaidon), art galleries (Gagosian Gallery), and prestigious brands (Hermès), while exploring typefaces both as physical forms and abstract systems. Apeloig has found inspiration in the modernist movements who sought a fusion of art and design, and in his own fascination for painting, literature and performing arts. In 1989, he established his own design studio in Paris. Philippe Apeloig has taught typography and graphic design at the École Nationale Supérieure des Arts Décoratifs in Paris (1992-1999) and the Cooper Union School of Art in New York (1999-2002). His design compositions have won him numerous prizes.

Le Laboratoire Cambridge opened in Kendall Sq in October, 2014. Dedicated to the development of the most radical ideas, those transforming the way we learn, we imagine and evolve, Le Lab invites everyone to participate in the experiments and discoveries of world-renowned artists, designers, scientists, and culinary masters through dynamic exhibitions, interactive seminars, and unexpected food and drink experiences. Functioning as a hive of innovative thinking and practice, Le Lab’s public programming explores ArtScience by illuminating the collaborative processes and insights of various thinkers, practitioners, and makers.