Home > Amartya Sen awarded Legion of Honor Medal for Achievements in Economics and (...) 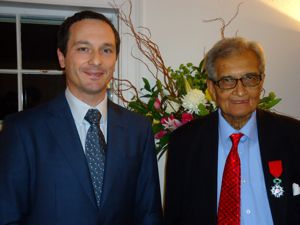 From left to right: Fabien Fieschi, Consul General of France, and Amartya Sen 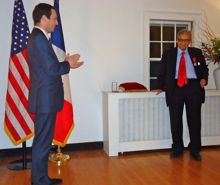 On Tuesday, November 27, 2012, Amartya Sen, the winner of the 1998 Nobel Prize in Economic Sciences, was decorated with the title of Chevalier of the Legion of Honor. He was recognized for his contributions to the advancement of values and ideas shared and promoted by the French Republic, such as the universality of human rights and of the democratic ideal, the importance of social progress for all, and the mutually reinforcing relations between freedom and development.

He is currently Thomas W. Lamont University Professor and a professor of economics and philosophy at Harvard University, and was honored for his contributions to the measurement of economic progress in France.

The Legion of Honor, created in 1802 by Napoleon, is France’s highest public decoration, and though normally reserved for French nationals who have served the country in a military or civil capacity, the title is also given to non-citizens as recognition of an extraordinary service to France. It was awarded to Sen by decree of the President of the French Republic, then Mr. Nicolas Sarkozy. 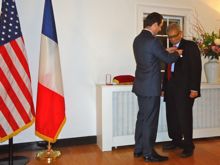 In 2008, upon the request of former French president, Nicolas Sarkozy, Sen served as Chair Adviser of the Commission on the Measurement of Economic Performance and Social Progress. This commission transformed the way in which French policy decisions are formed by underlining the importance of measuring progress by more than just GDP, instead focusing on overall quality of life and factors such as crime, environment, health care access, and income inequality. In this way Sen worked directly with the political leadership of not only France, but of all industrialized countries, since the Commission was closely associated with the Organisation for Economic Cooperation and Development (OECD). 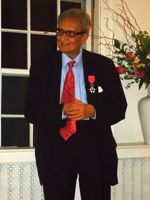 Today France recognizes that the final report of this Commission, published in 2009, has contributed to making France a better place for its people by taking the emphasis off of a "production-oriented" measurement system. The findings of the Commission have already started to be implemented in France, notably by the National Institute for Statistical and Economic Studies.

Sen has gained international recognition as an academic who has played a serious role on the political stage. His work on the causes of famine, inspired by his childhood in India, has helped to change public perceptions of starvation by demonstrating how famine can occur even when domestic food production has not decreased. Moreover, he aided in the creation of the United Nations’ Human Development Index, which addresses the argument that simple measures of GNP are not adequate indicators of global living standards. 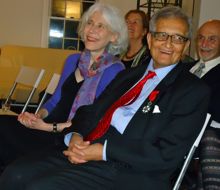 From left to right: Emma Rothschild and Amartya Sen

Throughout his extraordinary career, Sen seems to never shy away from a battle, working tirelessly to promote human rights, gender equality, and justice within the context of globalization. As an author, he has written countless books on economics and philosophy, including topics such as welfare economics, development economics, public health, gender studies, and social choice theory, a philosophical foundation backed by mathematics that earned him the Nobel Prize. His books have been translated into more than 30 languages and continue to garner international attention. 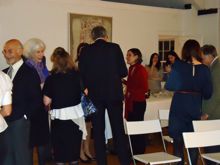 Friends of Professor Sen gathered for the ceremony.

An Indian citizen, Sen was born in Santiniketan, India, and he studied at the Presidency College, Calcutta and at Trinity College, Cambridge. Having dedicated his career to the study and teaching of economics and philosophy, he has taught at many esteemed universities including Jadavpur University Calcutta, the Delhi School of Economics, and the London School of Economics, and he was also Drummond Professor of Political Economy at Oxford University. Currently a senior fellow at the Harvard Society of Fellows, he is also a Distinguished Fellow of All Souls College, Oxford, and a Fellow of Trinity College, Cambridge, an institution where he was Master from 1998 to 2004.

Sen has received honorary doctorates from major universities on four continents, and has won countless awards throughout his career. Previous awards include the “Bharat Ratna” (the highest honor awarded by the President of India), the Indira Gandhi Medal Award of the Asiatic Society, the Eisenhower Medal, the George C. Marshall Award, and the Honorary Companion of Honour.