Home > American Association of Teachers of French in Providence

American Association of Teachers of French in Providence

This past weekend was the 86th annual convention American Association of Teachers of French in Providence, Rhode Island from Thursday July 11, 2013 to Sunday July 14, 2013. Over 320 people attended the convention that the Cultural Services of French Consulate in Boston helped organize, and it was overall an occasion of exchange, learning, and connection. Both Governor Lincoln Chaffee and Mayor Angel Taveras wrote letters of welcome to the AATF annual convention.

The AATF is an “organization of nearly 10,000 members and is a flagship of instruction in the French language, garnering accolades for its support of teacher training and championship of multilingual skills, especially among young people” (Mayor Traveras). As the Governor points out in his letter, it is due to the “devotion and enthusiasm of members of the AATF, [that] there are new opportunities in countless communities to learn about French language and culture and increase cultural competence overall.” 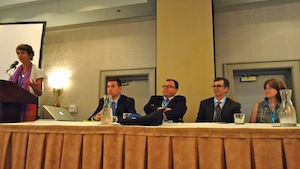 The next four days were packed with opportunities to learn from other French teachers, explore Providence, think about new ways to incorporate cultural competence and so on. Each hour of the day had up to nine different activities planned in various places, which ensured everyone was able to continue meeting new people, learning new teaching techniques, and get the most out of the weekend.

a dinner at Cav for all those who have been accepted to the Palmes Académiques.

On the night of July 11, all members of the Palmes Academiques were invited to a dinner at Cav. A guest of honor at the dinner, Jean Claude Duthion, the Attaché of Educational from the French Embassy of France in Washington, came from Washington D.C. for the four days of the convention. He then gave a presentation July 13, 2013 that focused on the promotion of French and supporting French teachers, which are the two axes of educational cooperation. Another guest of honor at the dinner of the Palmes Academiques, the Education and Linguistic Coordinator at the French Consulate of Boston, Magali Boutiot, was not only in attendance during the entirety of the convention but was also an instrumental force in organizing the convention itself, which was a great success.

On Friday, July 12, Jean François Duclos a Professor from the Metropolitan State University of Denver launched a lesson plan for ongoing learning experience for teachers of French at a distance. This program, to which the cultural services from the French Embassy contributed, is a 30 hour hybrid model that utilizes both face to face contact was well as online interaction. This programs awards the teachers who participate three Continuing Education credits from the University of Utah.

The Consul General of Boston, Fabien Fieschi, arrived on Saturday July 13 to say a few words at a closing reception that was co-sponsored by the French Consulate in Boston.

The Consul General Fabien Fieschi spoke at a closing reception.

Congratulations to the local committee, its regional president, Joyce Beckwith, and Michael Hebert, Rhode Island president, who worked during an entire year to make this event a successful one.