On 18 June 1940, speaking from London, General de Gaulle made his appeal to the French Résistance over the airwaves of the BBC, an act that founded Free France. 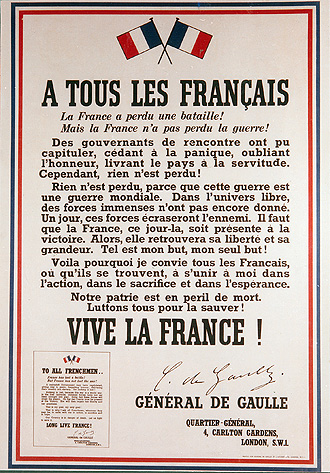 On the evening of 16 June 1940, Paul Reynaud, who found himself in a minority in his own Government owing to the partisans of the armistice, resigned. Maréchal Pétain, appointed President of the General Council by the President of the Republic, struck up negotiations with the enemy and on 17 June asked the French to lay down their arms.

In response to this request for an armistice, Charles de Gaulle fled to London. He set up base with his aide-de-camp Geoffroy Chodron de Courcel in a flat leant to him by a Frenchman, at 6 Seymour Place, near Hyde Park. Once installed he decided to draft a speech rejecting the defeat and calling on the French to keep fighting.

Encouraged by British Prime Minister Winston Churchill, he gave this speech over the airwaves of the BBC on the evening of 18 June 1940. He announced that the war was not over, stressing that “France is not alone!” He showed visionary spirit in affirming that “this war is a world war”, and added that “the fate of the world is right here.”

The essential for General de Gaulle was and was to be to guarantee a place for France alongside the future victors.

On 18 June 1940, thanks to his speech that was as visionary as it was barnstorming, Charles de Gaulle saved the very honour of France. 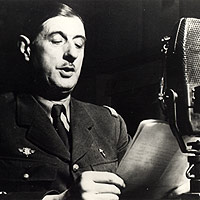 “But has the last word been said? Must hope disappear? Is defeat final? No!