Arthur Goldhammer named Officer of the Order of Arts and Letters 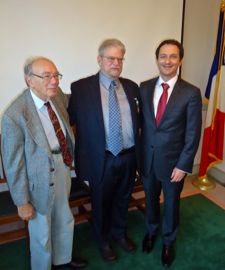 Fabien Fieschi, Consul General of France, awarded Mr. Arthur Goldhammer of the Harvard University Center for European Studies one of France’s most prestigious medals last Friday, naming him an Officer in France’s Order of Arts and Letters. 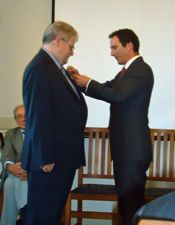 Mr. Goldhammer, one of today’s foremost translators of French literature, has translated more than 120 works of French literature into English. His many accomplishments include translations of books by writers such as Tocqueville, Zola, Duras, Yourcenar, Duby, among others, and these achievements have been recognized with many awards, including the “Médaille de Vermeil” of the French Academy (1997).

His other awards include the Lewis Galantière Prize of the American Translators Association (2012), the French-American Foundation Translation Prize (2011, 2005, 1996), and the John Simon Guggenheim Memorial Fellowship (2006-7).

Mr. Goldhammer writes frequently about the history and politics of France and the United States, and he currently runs a blog about issues of contemporary French politics. He is currently writing a book about democracy in America since Tocqueville and is working on translations of books by Albert Camus and Thomas Piketty. 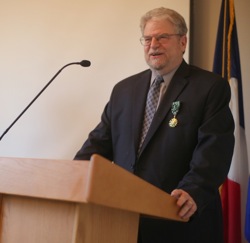 Arthur Goldhammer, Officer of the Order of Arts and Letters

L’Ordre des Arts et des Lettres (the Order of Arts and Letters) is among the most prestigious of French decorations and recognizes eminent artists, curators, art professionals and other greats who have contributed significantly to furthering the arts in France and throughout the world. Americans who have received the award include: Paul Auster, Jim Jarmusch, Richard Meier, Robert Paxton, Robert Redford, Meryl Streep and Uma Thurman.