Home > Bilingual Education: A French Tide Rises in the U.S.

Bilingual Education: A French Tide Rises in the U.S.

From News From France, May 2013
By William Fleeson

Everyone has heard of French class, but what exactly is “bilingual education”? The idea of continuous instruction in two languages—as opposed to a once-a-day foreign language course—is gaining traction among a growing number of education experts. The term “immersion” is often used to describe the same idea of an intensive, dual-language learning environment.
French is a natural choice for many Americans, who want their children to benefit from a global language in addition to English. Here’s a look at how French-and-English bilingual education is growing in the United States.

According to France’s Ministry of Foreign Affairs, some two million students in 53 countries are educated in French bilingual instruction. A priority for France and the growing number of foreign partners with whom the country organizes programs, bilingual education offers significant socio-economic opportunities for students in developing countries, whose native language may not be spoken elsewhere in the world.

Another advantage of French-language education comes in the form of “non-linguistic disciplines,” meaning that learners can absorb subjects like math, science, and the arts—all in French. A student who understands a discipline in French can then go on to study at the university level or beyond, and will have the language training needed to succeed in his or her chosen track. 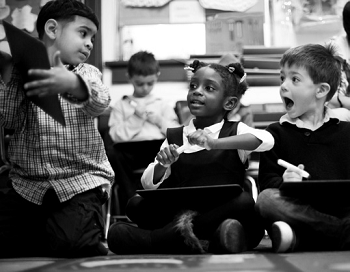 Several U.S.-based associations have created opportunities to bring the benefits of bilingual education stateside. The French Heritage Language Program, part of the French-American Cultural Exchange (FACE), works to help “hundreds of young Americans and new immigrants make the most of their French” in the U.S., according to its coordinator, Benoit Le Devedec.

And it’s not focused exclusively on France and French culture, but a global palette of French-speaking societies. Newcomers to the U.S. from Haiti, West Africa, Canada and elsewhere have rallied in support of the program, which allows them to learn and share with other students in a culturally rich environment that serves the students, schools, and communities involved.

Likewise, the Louisiana-based CODOFIL program, or the Conseil pour le Développement du Français en Louisiane? seeks to celebrate and promote the legacy of the French language in its state. In particular, its Visiting Teachers program recruits educators from France to live and work in Louisiana for between two and three years. Their placements include 30 schools and reach some 4,000 students statewide. Students gain language skills while learning about the unique French heritage of Louisiana.

This past March, CODOFIL announced its forthcoming support toward hiring teachers at the Lycée Français charter school in New Orleans.

If the U.S. has any single center of Francophone cultural life in the U.S., New York City is arguably it. With over 31,000 French citizens registered at the French Consulate and more than 120,000 French speakers from the world at large according to the American Community Survey, the Big Apple has seen its Francophone community blossom through a new crop of associations, interest groups, and, of course, schools. 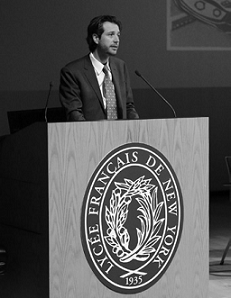 The rise of bilingual education is a phenomenon seen by some experts as the new normal for language instruction. Fabrice Jaumont, education attaché of the French embassy, calls the idea a “French bilingual revolution” and is convinced that the practice of bilingual teaching will become increasingly widespread in coming years.

Mr. Jaumont joined a panel discussion on the same theme on April 13, called “Living with Two Languages: The Advantages of Being Bilingual.” Held at the Lycée Français of New York, bilingual education advocates from fields as diverse as psychology and nutrition spoke to the mental and cultural doors opened to students who can benefit from a native and learned language.

In a video shown at the conference, a six-year-old student is interviewed in French about his experience at the school. His French is halting and at times accidentally endearing, such as when he explains how the dual-language curriculum is conducted day-to-day.

“Co-teaching, or binôme, is when we have two teachers, one American and one French, and... we do something with them. When we talk with the French teacher, we speak French, and when we speak English, we speak to the English teacher. We can tell stories and do other things, alternating French and English.”

In addition to its educational benefits, the combination of two languages generates an “ability to empathize, to put yourself in someone else’s shoes,” said Marie Bouteillon, an educator and founder of the French-and-English program at PS58 The Carroll School in Brooklyn, NY. The same school was visited on March 22 by Minister Delegate for French Abroad, Hélène Conway-Mouret.

Nor is a dual-language curriculum just about the language itself. “It’s the culture, it’s the literature... It’s about how I act” with the students, she said. In other words, bilingual instruction promises a language, yet delivers a world of cultural enrichment.

Mr. Jaumont agrees. “Bilingualism... touches on a person’s emotions, a person’s brain, [...] a person’s creativity... I think this has an impact on the overall achievement” in a student’s life, he said, in an April interview with News From France. 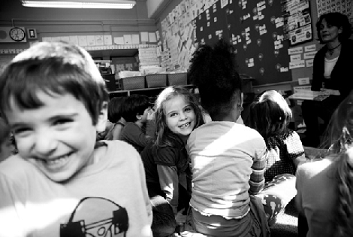 Though the benefits of French-and-English learning are clear to those familiar with programs already in place, getting such a program off the ground can be a different challenge entirely. Several families, some French, others American, have pushed successfully to establish French offerings as part of their local public schools. French dad Virgil de Voldère helped organize a bilingual program at the public school PS 84 in Manhattan’s Upper West Side.

After endless phone calls and the help of Education Française de New York (EFNY), a civic organization founded in 2005, the three involved parents were able to make French instruction part of their local school’s offerings.

Short of trying to launch a full-blown program, some recommend starting small, as Jean-Cosme Delaloye did. The Swiss expat began an after-school program at PS 133, in Brooklyn, NY, in 2011. Rather than starting the class for the French-speaking families in the neighborhood, Mr. Delaloye focused on building involvement from the school’s American families.

“You can’t segregate yourself from the rest of the school,” he said, in an interview with the community magazine France-Amérique. “The success of the bilingual course also depends on the support of the parent representatives” of a given school, he said.

The will to develop French-language teaching extends far beyond New York City. Communities in places like California, Colorado, Georgia, and Utah have taken steps to found bilingual classes where they live.

Utah has shown particular interest, says Jean-Claude Duthion, Attaché for Educational Cooperation at the French embassy. Among Utah’s 10 French-and-English programs, offerings at the elementary-school level will extend to middle school in 2014, while high school students previously left without options will, in coming years, enjoy greater availability of college-level French courses they can take before graduating from high school.

“It’s a pioneering system,” Mr. Duthion said in an interview with News From France. 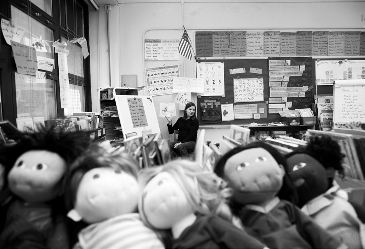 The new programs join the ranks of others firmly in place already. The first such program began in southern Maryland, with another soon following in northern Virginia. Similar programs exist in Boston and Minneapolis. The longer the programs continue, it seems, the more popular they become. Several of the longtime French immersion programs have had to turn away interested families for lack of space.

Whether it’s a fledgling after-school group or an established model promising “revolution” in the classroom, bilingual education offers new horizons. While wome maintain ties to their heritage language, others develop new ones. Students enjoy learning new words and new cultures, while parents know that their children are benefitting from the best of two languages and the opportunities that come with them. French-language teaching is on the rise, and local schools and education boards are catching on.