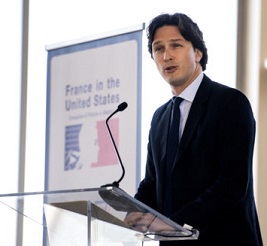 Prior to his assignment in Boston, Arnaud Mentré was Deputy Assistant Secretary for North America in the Bureau of the Americas at the French Ministry for Europe and Foreign Affairs (2015-2018), responsible for bilateral relationships with the U.S. and Canada.

Arnaud Mentré joined the French Ministry of Foreign Affairs in 2006 in the Bureau of strategic affairs, international security and disarmament.

From 2009-2011, he served as counsellor at the French Embassy in Moscow, and then became advisor to the Minister of Foreign Affairs, for Russian, Eastern European, and defense and security issues (2011-2012).

From 2012-2015, Arnaud Mentré served as senior counsellor and spokesman at the French Embassy in New Delhi.

Arnaud Mentré is an alumnus of the Ecole Normale Supérieure (ENS) and the Ecole Nationale d’Administration (ENA). He holds an M.A. in civil law from the University of Paris II and graduated from Sciences-Po.