Congratulations to our finishers Laurent & Philippe and many thanks to Anthony Wrubel. If the 2016 Boston Marathon is over, you can still donate to GiveForFrance, the Fondation de France charity dedicated to helping victims of the Paris Attacks and healing from terrorism. Read the story behind this year’s Marathon and learn how to donate here.

If you are in the US, to donate and support this French-American show of solidarity, go to http://www.giveforfrance.org/en, click on “Online Giving”, and in the “Dedicate your gift” section, select “In Memory of” and write “Paris Boston.” You can also donate $10 to the charity by sending a “PARIS” text to 20222 (only in the US). Note that your donation is tax-deductible. If you are in France, go to http://www.giveforfrance.org/ and follow instructions.

Congratulations to our two finishers and many thanks to Anthony Wrubel for offering the bibs: 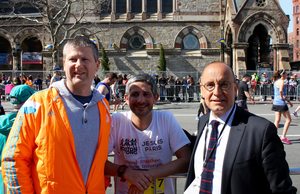 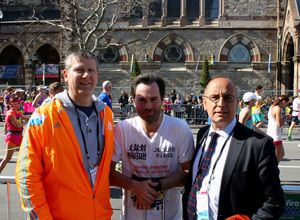 Discover the story behind this generous initiative of a Boston Marathon Survivor:

On April 15, 2013, Anthony Wrubel was standing near the Boston Marathon finish line when the first bomb exploded, leaving him with only minor injuries, “a stroke of luck that I was not more seriously injured”, as he today recalls.

After this terrible tragedy, like many of the survivors, Mr. Wrubel found out that starting to run and preparing for the 2014 Marathon, helped him heal and move forward with his life. “This is how I needed to confront what happened to me and what happened to the city of Boston, I needed to try to take Marathon Monday back for myself and for others.” On April 21, 2014, as part of a Boston Marathon bombing support group called 4-15 Strong, Mr. Wrubel, who had almost no running experience, ran and finished his first marathon – and did it again the following year. This achievement and the support he received for it helped him tremendously along the path to recovery. 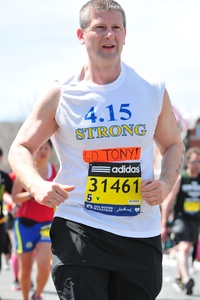 This year, Mr. Wrubel is not running the marathon. Instead, in the wake of the November 2015 Paris Attacks, he has decided to reach out to the French community and to the people of Paris: in a remarkable gesture of solidarity, he offered his Boston Marathon bibs donated to him by the BAA to two French marathoners living in the Boston area, Laurent Meunier and Philippe Lopes-Fernandes, who will run the Boston Marathon in memory of the victims and in support of the survivors of the Paris attacks of last November.

“As soon as I saw that tragedy, it brought me back to where I was before and to what happened to the city of Boston, said Mr. Wrubel. One of the bright spots to it was the tremendous support that the world showed Bostonians afterwards. I just did not want that to be forgotten. I thought that the people of Paris should know that the world was looking out for them, supporting them. It’s a very long road back to recovery, and in some cases it can last a lifetime. The path to recovery needs a lot of support. I just wanted to make sure that the people in Paris knew that they were not forgotten and were being supported.” 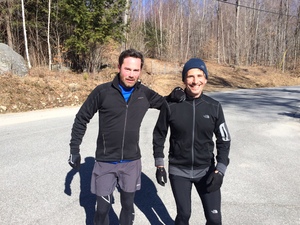 Laurent and Philippe, the French marathoners

Laurent and Philippe, the French runners, are two friends accustomed to this kind of project, who sincerely share Mr. Wrubel’s compassion and gratitude: “We have both been really shocked and saddened by the series of terrorist attacks in Boston, Paris and Brussels. But, at the same time, we were impressed by the warm solidarity and friendship between the American people and the people of France on those occasions. So we did not hesitate for a second when Anthony reached out to us throughout the French Consulate a few weeks ago.”

The three men have decided that the results of their joint action of solidarity should go in support of the GiveForFrance project. This French-American initiative launched by the charity Friends of Fondation de France, aims to heal people from terrorism and to help the victims and families of the November 2015 Attacks.

You can also discover the story by watching CBS’ coverage of this remarkable show of solidarity. 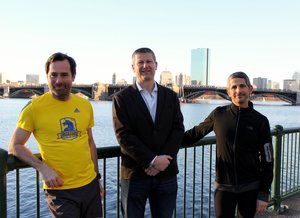 The three men together

If you are in the US, to donate and support this French-American show of solidarity, go to http://www.giveforfrance.org/en, click on “Online Giving”, and in the “Dedicate your gift” section, select “In Memory of” and write “Paris Boston.” You can also donate $10 to the charity by sending a “PARIS” text to 20222 (only in the US). Your donation is tax-deductible. If you are in France, go to http://www.giveforfrance.org/ and follow instructions.