Fogg Art Museum
The Fogg Art Museum, which opened to the public in 1895, is Harvard’s oldest art museum.
Around its Italian Renaissance courtyard, based on a sixteenth-century façade in Montepulciano, Italy, are galleries illustrating the history of Western art from the Middle Ages to the present, with particular strengths in Italian early Renaissance, British pre-Raphaelite, and nineteenth-century French art.

The Wertheim Collection, housed on the second floor of the Fogg, is one of America’s finest collections of Impressionist and post-Impressionist work, and contains many famous masterworks such as L’Autoportrait by Vincent Van Gogh, dedicated to Gauguin, La Répétition générale by Edgar Dégas, and Monet’s La Gare de Saint-Lazare. The Boston area’s most important collection of Picasso’s work is also found at the Fogg.

> Busch-Reisinger Museum
The only American museum dedicated to the art of Central and Northern Europe, the Busch-Reisinger Museum puts specific emphasis on German-speaking countries.
Founded in 1901 by Kuno Francke, Professor of German literature at Harvard University, the collection includes especially important holdings of Austrian Secession art, German expressionism, 1920s abstraction, and material related to the Bauhaus (including archives of Lyonel Feininger and Walter Gropius).
In addition to notable collections of late Medieval, Renaissance, and Baroque sculpture, 16th-century painting, and 18th-century porcelain, the Museum has recently focused on deepening its holdings of post-war and contemporary art from German-speaking Europe.
The collection of unique artworks by the post-war artist Joseph Beuys is among the world’s most comprehensive.

Taking its design inspiration from a 15th century Venetian palace, the Isabella Stewart Gardner Museum was created by architect Willard T. Sears.
The former home of Isabella Stewart Gardner, the building itself has remained essentially unchanged since her death, and the museum features paintings, sculptures, tapestries, engravings, ceramics, photography, and furniture from all over the world.
The three floors of galleries house a collection that spans 30 centuries, dating from Ancient Rome to the 19th century.
With a magnificent courtyard at its center, the museum itself provides an atmospheric setting for Isabella Stewart Gardner’s inventive creation.

The Institute of Contemporary Art

Originally located in the heart of Boston, the ICA moved in December 2006 into a new space designed by Diller Scofidio + Renfro on Boston’s waterfront.
The inauguration of the new building coincided with the museum’s first permanent collection.
The architecture of the ICA plays with interior and exterior space, and promotes a scenic view of the waterfront from each of the museum’s galleries.

The original MFA opened its doors to the public on July 4, 1876, the nation’s centennial. Built in Copley Square, the MFA was then home to 5,600 works of art. Over the next several years, the collection and number of visitors grew exponentially, and in 1909 the Museum moved to its current home on Huntington Avenue.

Today the MFA is one of the most comprehensive art museums in the world, with a collection that encompasses nearly 450,000 works of art. The MFA welcomes more than one million visitors each year to experience art from ancient Egyptian to contemporary, special exhibitions, and innovative educational programs.

Founded in 1881, the library and collections at the Boston Historical Society bring the city’s history alive.

Inside, the biggest names in Bostonian history discuss the future of the British Colonies. For history lovers, this is truly an incomparable experience!

Founded in 1848, by an act of the Great and General Court of Massachusetts, the Boston Public Library (BPL) was the first large free municipal library in the United States. Among its large collections, the BPL holds several first edition folios by William Shakespeare, original music scores from Mozart to Prokofiev’s "Peter and the Wolf;" and, in its rare book collection, the personal library of John Adams.
Due to the extent of the collections, many items are displayed on a rotating basis.
These unique Special Exhibits are shown in the Research Library and offer the public an opportunity to view books and documents which are usually available only to research scholars.

The Otis House Museum exemplifies the elegant life led by Boston’s governing class after the American Revolution. Harrison Gray Otis made a fortune developing nearby Beacon Hill, served as a Representative in Congress, and later was Mayor of Boston.
This was the first of three houses designed for the Otis family by their friend Charles Bulfinch, the architect of the Massachusetts State House.
Its design reflects the proportions and delicate detail of the Federal style, which Bulfinch introduced to Boston.
The Otis House also houses Historic New England’s headquarters, its Library and Archives, and a museum shop with books, reproductions, and gifts. Walking tours of Beacon Hill and other programs and events are held at the Otis House.

The John F. Kennedy Library first opened its doors on October 29th, 1993. Conceived by architect I.M. Pei, one façade of the JFK Library is constructed entirely of glass and metal, and offers a beautiful view of the ocean.
The museum was created in order to promote enthusiasm for John F. Kennedy, and the American government and political system.
Its mission is to help people to better understand the life of the former President, as well as the time in which he lived.

The New England Holocaust Memorial was built to foster memory of and reflection on one of the great tragedies of our time, the Holocaust (Shoah).
The effort was begun by a group of survivors of Nazi concentration camps who have found new homes and new lives in the Boston area.
Dedicated in October, 1995, over 3000 individuals and organizations from across the community joined in sponsoring the project.
The Memorial design features six luminous glass towers, each reaching fifty-four feet high, and each lit internally from top to bottom. Six million numbers ­are etched in the glass.

- Peabody Museum of Archaeology and Ethnology

Founded in 1866, the Peabody Museum is one of the oldest museums in the world devoted to anthropology and houses one of the most comprehensive records of human cultural history in the Western Hemisphere. 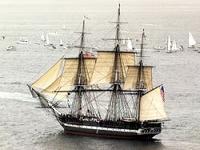 The USS Constitution, or, ’’Old Ironsides’’ of a wooden-hulled, three-masted frigate of the United States Navy, and is the oldest commissioned ship afloat in the world.
Today, ’’Old Ironsides’’ serves as a backdrop to countless events. The crew consists of 55 sailors, all from the US Navy.

Created in 1971, the museum of the Massachusetts Institute of Technology houses an impressive collection of holography, artificial intelligence, robotics and history of MIT.
Through its interactive exhibitions, the MIT museum invites you to explore the ideas, innovations, and opportunities made possible by the scientific and technological advancements of our century.

The Museum of Science, situated along the Charles River, offers over 500 interactive exhibits.

The planetarium lets you travel from planet to planet, visit stars throughout the Milky Way, and explore other galaxies. A giant IMAX screen lets you discover the world of the pharaohs, tour the Grand Canyon, and the Alps.

- Children’s museum Created in 1913 by teachers of Jamaica Plain, this museum strives to help children better understand and appreciate the world in which they live.
Through workshops and group activities, the Children’s Museum encourages the development of imagination, curiosity, and analysis.

- New England Aquarium Located on the Boston waterfront, the New England Aquarium is one of the leading aquariums in the U.S.
Visitors can experience the world of water by seeing the Aquarium’s more than 50 exhibits and thousands of marine animals in their habitats, going on a whale watch or viewing a film in the Simons IMAX Theatre.
The Aquarium is also a pioneer in marine animal rescue, and a leading ocean conservation organization with research scientists working on projects around the globe.

Other museums in Boston that offer activities for children :

the Museum of Science shows films in 3D animation,

the Harvard Museum of Science lets you discover unusual animals every Sunday morning,

the Peabody Museum of Archaeology and Ethnology organizes interactive programs for young children,

and the USS Constitution lets you discover the history of the ship and the life of its crew members.

For more information, please click here to search for a museum in Boston, by genre or location.