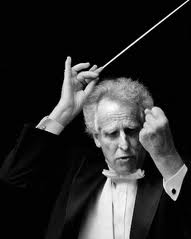 The Boston Philharmonic, under conductor and Music Director Benjamin Zander, will open their 2010/2011 season on

with an intriguingly balanced French-flavored program.

Gershwin’s jazzy masterpiece, An American in Paris, is paired in the first half of each concert with Ravel’s jazz-tinged Piano Concerto In G, while Stravinsky’s austere Symphonies of Wind Instruments, (French title: Symphonies d’instruments à vent) composed as a homage to Debussy, is paired with that composer’s most brilliant evocation of the sea, La Mer.

Stephen Drury, one of the leading exponents of contemporary piano music in the world today, returns to recreate with the Boston Philharmonic the scintillating performance of the Ravel concerto he gave fifteen years ago. That performance is remembered by many as one of the most thrilling concerto performances in Boston concert lore. The Penguin CD Guide lists the recording made of this concert as one of the best recordings ever.

When asked why he had chosen this atypical program to open the Boston Philharmonic season Maestro Zander explained, “I am always looking to challenge the orchestra to rise to the next level. We would not have tackled a program this demanding even a few years ago. There is nothing more difficult for an orchestra than to realize the intricate textures of La Mer. No composer ever succeeded as well as Debussy in evoking the infinitely subtle movements and mood shifts of the sea. The work sets a pinnacle challenge for any orchestra, especially for one, I might say, performing in the same town as the world’s greatest “French” orchestra, namely the Boston Symphony! The BSO recording with Charles Munch from 1956 still stands as the all-time bench- mark performance.”

“I am also always excited to raise the stakes for the audience too. They have come over the years to understand and love Mahler and Bruckner and the great 19th century and early 20th century classics. Now I will be asking them to tune their ears to the extreme refinements of Debussy. In the pre-concert lecture I will show how Debussy invented a completely new musical language to capture the colors and feelings of nature—how two flutes and a pair of clarinets can convey the swoop of a bird into the water to capture a fish, or the massed forces of a full symphony orchestra can conjure the power and terror of a storm at sea!”

“I encourage people to come to the Discovery Series on Thursday night (starting at the new time of 7:00 P.M. in order to enable more school-aged children to attend), when I can demonstrate these things with the orchestra on stage.”

Maestro Zander concluded “This program is VERY suitable for young people. It is descriptive and immensely varied. It will provide a brilliant introduction to what an orchestra can do. I know I will be bringing my 9 and 7 year old grandchildren along on Sunday afternoon and I am sure they will love it.”

Boston Philharmonic concerts are a two part affair. A large and loyal audience has come to understand that the preconcert lecture and the concert itself are one thing. Ben Zander’s lively, enthusiastic explanations have become an intrinsic part of the total experience for knowledgeable concertgoers and newcomers alike.

Gershwin: An American in Paris