Centers of the Performing Arts

Located on the Harvard campus, the American Repertory Theatre encompasses the Loeb Drama Center and the Zero Arrow Theatre. Founded in 1980 by Robert Brustein, it is currently directed by Diane Paulus.
In 2003, the A.R.T. was named by Time Magazine as one of the 5 best theatres in the United States. Each season at the A.R.T. offers rich and diverse pieces, such as Copenhagen, directed by Scott Zigler, Don Juan Giovanni, and Figaro, directed by Dominique Serrand, and Arthur Nauzyciel’s adaptation of Julius Caesar.

Zero Arrow Theatre Created in 2005, the Zero Arrow Theatre is a more intimate performance space with a 300-seat capacity, situated at the heart of Harvard Square. It provides a unique and adaptable space which can be modified to suit each production.

- Boston Center for the Arts

The Calderwood Pavilion located in the BCA, including the Roberts Studio Theatre and the Wimberly Theatre.

Founded in 1981 by Nobel laureate Derek Walcott, the Boston Playwrights Theatre is a small theatre that encourages the writing and production of new plays. The theatre is connected to the English department of Boston University and offers a course in theatrical writing.

The Wang Center for the Performing Arts or the Citi Performing Arts Center is comprised of two theatres : the Wang Theatre and the Schubert Theatre, both located in the Theatre District, and is a partner of the Boston Ballet, Boston Lyric Opera, Boston Celebrity Series, and the Commonwealth Shakespeare Company.
The Wang and Schubert theatres receive dance, theatre, music, and opera companies from all over the world.

The Wang Theatre Originally called the Metropolitan Theatre, it was restored at the beginning of the 1990s thanks to a generous donation by Dr. An Wang, and is able to accommodate over 3600 spectators.

Shubert Theatre Considered the “little princess” of the Theatre District, the Shubert Theatre is known for its dark, elegant interior, and hosts many local community arts organizations. 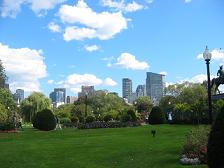 The Cutler Majestic Theatre is situated at the heart of Boston’s historic Theatre District. Constructed in 1903 for theatre production and later for vaudeville acts, its style and décor are both classic and rococo. Now belonging to Emerson College, it is recognized by the National Register of Historic Places. Today, its programming is very diverse, including opera, dance, theatre, musicals, Emerson student performances, and televised shows.

The original Huntington Theatre building was constructed in 1925 by architect J. Williams Beal Sons. It is located next to Symphony Hall, close to the Museum of Fine Arts and the old Boston Opera House.

The Huntington Theatre Company is Boston’s leading professional theatre and one of the region’s premier cultural assets since its founding in 1982.

Recipient of the 2013 Regional Theatre Tony Award, the Huntington brings together superb local and national talent and produces a mix of groundbreaking new works and classics made current to create award-winning productions.

The Huntington runs nationally renowned programs in education and new play development and serves the local theatre community through its operation of the Calderwood Pavilion at the BCA.

The Huntington has long been an anchor cultural institution of Huntington Avenue, the Avenue of the Arts, and will remain so on a permanent basis with plans to convert its current theatre into a first-rate, modern venue with expanded services to audiences, artists, and the community. Under the direction of Artistic Director Peter DuBois and Managing Director Michael Maso, the Huntington cultivates, celebrates, and champions theatre as an art form.

Founded in 1974 by Polly Hogan and Ron Ritchell, the mission of the Lyric Stage is to present quality pieces of varied theatrical genres and styles. The current artistic director, Spiro Veloudos, encourages area artists by producing the works of local playwrights, such as The Curse of the Bambino, written by David Kruh.

Constructed in the 1920s, the Opera House was dedicated originally to Vaudeville and cinema. Today they host hit Broadway musicals, popular and alternative musicians, the Boston Ballet, and singers.

The core of The Publick Theatre is a triangle composed of three programs. The Mainstage is the popular, summer season performance program that has offered outdoor theatre to the people of Greater Boston for the past 35 years.
The Young Company focuses on performing arts education and experience for arts-oriented inner city high school students and their suburban counterparts.
The Shakespeare Workshop offers performing arts education and experience for local adults and professional actors. These three programs feed into one another, building momentum through training, mentoring, and teamwork and providing hands-on experience in the process of artistic expression.

Built in 1900, The Colonial Theatre is the oldest continuously operating theatre in Boston. The Colonial was designed by Clarence Blackall and is ideal for both musical and dramatic productions.
Throughout its history, the Colonial has hosted many world premieres and pre-Broadway productions, including: Porgy and Bess, Oklahoma! and The Merchant of Yonkers (the inspiration for Hello Dolly!) The Colonial remains one of the pre-eminent theatres in the United States, and is a jewel of American Theatre. This historic theatre continues to host musical and theatrical productions today, sharing its events with the Opera House since its renovation.

Since 1998, the Boston Playwrights Theatre has organized the Boston Theater Marathon. Taking place during the month of May, the marathon hosts 50 new plays by Boston-area playwrights, performed by 50 theatre companies in a 10 hour stretch.

Each summer, the Commonwealth Shakespeare Company, in partnership with the Citi Performing Arts Center, hosts a play by William Shakespeare in parks throughout the city of Boston.