Presentation in French, followed by networking

New R&D initiatives often called as “open innovation” are emerging to bring medicines to patients faster by facilitating public- and private-sector partnerships and collaborations, to solve common challenges encountered during the discovery and the drug development process.

Gustave Roussy strongly believe that disruptive innovative anticancer therapies will come more and more from small biotechs, and that Phase I unit in academic institutions have an active role to play in the field. Biotechs and Phase I experts should interact together and initiate collaborations, well before Phase I trials, to accelerate the development of disruptive innovations and boost their chance of success. 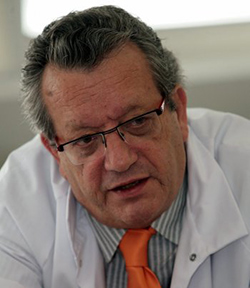 Jean-Pierre Armand, senior oncologist from Gustave Roussy, expert in very early drug development in phase I and II, will present how phase I units could play a major role for biotechs’ drug development in oncology by making an investigational targeted agent highly valuable. Some illustrative “win-win” partnerships to develop new targeted anticancer therapies could be presented during the session.

Gustave Roussy, based near Paris, France, is one of the biggest European comprehensive cancer center. According to its Director, Lex Eggermont, it must be a front-line player in early innovative cancer drug development at an international level.

Today it is already the 1st European cancer center for early clinical trials with 524 patients and 57 trials in phase I in 2013.

In 2013, he received the nomination of Chevalier of Legion of honor of French government.