The year 2013 marks the 50th anniversary of the signing of the Franco-German Treaty. To commemorate this milestone, special events will be held throughout the year in the United States to celebrate the lasting friendship and cooperation between France and Germany.

The Consulate General of France in Boston and Goethe-Institut Boston are pleased to present a series of French and German films. All screenings will take place at the Goethe-Institut at 7PM.

Exhibition : 50 years of the Élysée Treaty - Germany and France: Half a century of frinedship and cooperation

free and open to the public.


The exhibition is comprised of 26 poster boards containing photos, text, reproductions of historical documents and quotes that follow the evolution of the Franco-German cooperation and the birth of the Élysée Treaty.
It was developed by the German Information Center Paris (CIDAL) and was brought to and distributed in the United States by the German Information Center Washington. 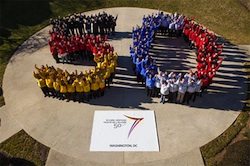 Celebrating 50 Years of Friendship Between France and Germany

France and Germany are each other’s closest and most important political, economic and cultural partners. The Elysée Treaty, signed on January 22, 1963 by the French President, General de Gaulle, and the German Chancellor, Konrad Adenauer, remains the cornerstone of French-German cooperation, which is the main engine of the European Union (the two countries represent 33% of the EU population, 36 % of the European Budget, 37 % of the EU GDP, 31 % of the voting rights…). The founding act of the French-German reconciliation and of the European construction is the Schuman Declaration of May 9, 1950, which proposed “to place their production of coal and steel under a common high authority, within the framework of an organization open to the participation of the other countries of Europe”.

What is the Elysée Treaty?

It is a Treaty about organization and principles. Its main objective is to develop habits of consultation and cooperation between the French and German authorities through:

Regular meetings of Heads of State and Government, at least twice a year (today, it is rather twice a month…).

Regular meetings of the Ministers of Foreign Affairs and contacts between high officials of the two Ministries, Embassies and consulates.

Regular meetings of the Ministers of Defense and the Chiefs of Staff of the two countries as well as Ministers and authorities in charge of education and youth issues.

Creation of an inter-ministerial commission to follow and coordinate the cooperation and to report to both governments. Today, this role is played by the European Ministers, who are also Secretaries General for the French-German cooperation.

A clear political commitment: “the two governments will consult each other, prior to any decision, on all important questions of foreign policy, and in the first place on questions of common interest, with a view to arriving, insofar as possible, at a similar position”.

The main fields of cooperation identified in the Treaty are the following:

1) Foreign Affairs, which includes European construction, East-West relations (the Treaty was signed 18 months after the construction of the Berlin Wall…), International Organizations, including NATO and the UN, as well as assistance to developing countries.

3) Education and Youth, with the aim to promote language instruction, to ensure the standardization of university degrees and diplomas and to increase cooperation between French and German research bodies and scientific institutes.

The creation of a joint French-German Fund for student exchanges between the two countries’ educational institutions is one of the most important achievements of the Elysée Treaty. The French-German Youth organization has contributed to more than 8 million cross-border exchanges since its creation.

What are the main developments based on the Elysée Treaty?

The structure and scope of the cooperation has expanded: new bodies for high level consultation and cooperation have been added in the domains of Defense, Culture, environment or Economy and Finance. The regular summits have been transformed into a Council of Ministers including different members of the French and German Governments while other meetings are limited to the French President and the German Kanzler (Blaesheim format). Constant dialogue between the French and German authorities is facilitated by numerous exchanges of officials. For example, there is a German Diplomat in the French Cabinet of the Prime Minister and another one who serves the French Foreign Minister.

The French-German EU “engine”: Because of the method established in the Elysée Treaty, France and Germany have a constant open dialogue and are always working towards reaching agreements. This enables the two countries to initiate and develop various projects or proposals to move the European construction forward such as the creation of a French-German Brigade (which prefigured the European Army Corps and the development of the Common Security and Defense Policy), the successful launching of EADS and Airbus, the borderless Schengen area, the Euro or the adoption of the Lisbon Treaty. Recently, the cooperation between France and Germany has been also instrumental in setting up the European Stability Mechanism and the Fiscal Pact.

How are France and Germany marking this celebration?

To mark the fiftieth anniversary of the signing of the Elysée Treaty (on 22 January 1963), several commemorative events will be held this year, highlighting the strength and history of the Franco-German relationship. Read more about it here.

Many events take place in France and Germany but also all around the world to celebrate this anniversary which should be oriented toward the youth and the civil society. Between France and Germany there are more than 4,300 school partnerships, 22 regional and 2,200 sister cities partnerships as well as 300 French-German friendship associations which are playing a crucial role in promoting exchanges between French and German people. To quote Jean Monnet, “Europe was not designed to promote a coalition of States but to unite the European people.”