Home > Consul General Fieschi Awards the Legion of Honor Medal to Six US (...) 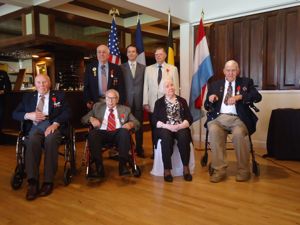 The six new Knights of the Legion of Honor with Fabien Fieschi, Consul General of France in Boston

Tuesday, October 23, 2012, Fabien Fieschi, Consul General of France in Boston, awarded six American veterans with the Legion of Honor, the oldest and highest honor in France, exclusively awarded in cases of exemplary military and civilian services.

At a ceremony in Westborough, Mr. Armand Descoteau, Mrs. Margaret Hammond-Walenski, Mr. Robert Nordgren, Mr. Edward Pizzetti, Mr. Roger Wheeler, and Mr. Frank Wooldridge were honored for their outstanding contributions during the liberation of Europe in WWII, and in particular, during the Battle of the Bulge in France.

The Battle of the Bulge, also known as the Ardennes Offensive, was a major German offensive in France, Belgium, and Luxembourg, from December 16, 1944 to January 25, 1945, in which the Allied forces achieved a tough but decisive victory. 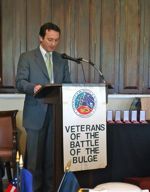 In his speech at the ceremony, which was also attended by Mr. Harold P. Naughton, State Representative, Lieutenant Stefano, Army ROTC at Worcester Polytechnic Institute, Dr. McAuliffe, President, Chapter XXII, 87th Infantry Division, and friends and family of the recipients, Consul General Fieschi acknowledged the extraordinary sacrifices of each of the new Knights of the Legion of Honor.

Mr. Armand Descoteau joined Company C of the 80th Tank Battalion on March 22, 1943, and took part in the Normandy landings and the Allies’ advancement as a tank driver. He participated in the battle in Vierville-sur-Mer, where the roads were so narrow that he had to further endanger his life by driving through fields filled with enemy mines. A descendent of French settlers in New England, Mr. Descoteau’s ability to speak French with local residents was a valuable asset as the US Army battled its way through France. For his bravery and sacrifice, Mr. Descoteau has also been awarded the Good Conduct Medal, the World War II Victory Medal, the American Theater Campaign Ribbon, and the European-African-Middle Eastern Theater Campaign Ribbon.

Mr. Robert Nordgren joined Company K of the 83rd Division of the 329th Infantry Regiment on June 7, 1943, arriving in France during the landings of Normandy on June 16, 1944. He subsequently fought in the battles for the liberation of the cities of Saint-Malo and Dinard. He and his regiment also fought in the Loire Valley and Verdun, and for his personal sacrifice on the front lines, he has also been decorated with the European-African-Middle Eastern Campaign Medal and the World War II Victory Medal.

Mr. Edward Pizzetti joined Company G of the 75th Division of the 289th Infantry Regiment on March 29, 1943, and he participated in the battles in Colmar and the Ardennes as a sharpshooter rifleman. Though his division came under heavy fire at Colmar, they succeeded in liberating the town from enemy soldiers, and this extraordinary bravery has also earned him the following decorations: the Croix de Guerre with a bronze star, a palm and a fourragère, the Silver Star Medal, the Good Conduct Medal, the European-African-Middle Eastern Campaign Medal, and the World War II Victory Medal.

Mr. Roger Wheeler participated in the landings in Normandy on June 9, 1944, and was a member of the 78th Armored Battalion and a part of the “Tank Destroyer” team. His battalion entered into combat with the Germans in the “hedgerows” and then fought their way to the town of Saint-Lô, later taking part in the important campaign at Ardennes. Quickly promoted to commandant during the war, Mr. Wheeler has subsequently been awarded the Good Conduct Medal, the European-African-Middle Eastern Campaign Medal, and the World War II Victory Medal.

Mr. Frank Wooldridge joined the Infantry Division of the 315th Medical Battalion of the 357th Infantry Regiment on January 16, 1941 as a surgical technician whose job was to provide medical aid to fallen soldiers. Mr. Wooldridge took part in the Normandy landings on Utah Beach, and worked to dismantle the Cointet barriers serving as a German defense. With his division, Mr. Wooldridge also fought in the liberation of the towns of Périers and Saint-Lô, as well as the battles of the Falaise pocket and the Metz region. For his exemplary personal sacrifice, Mr. Wooldridge has also been awarded the Good Conduct Medal and the European-African-Middle Eastern Campaign Medal.

Following his speech, Consul General Fieschi presented each of these veterans with the Legion of Honor medal, thanking each recipient for their extraordinary contributions to the liberation of France, and reminding them that their sacrifices have helped create a world in which the possibility of war in Western Europe has become unthinkable.

Fabien Fieschi, Consul General of France in Boston, awards the veterans with the Legion of Honor medal: 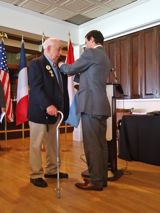 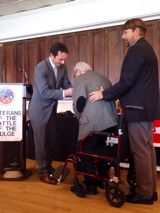 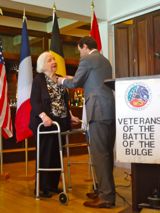