Creating cultural bridges between France and the United States!

On January 22, 2018, we celebrated two women who helped creating artistic and cultural bridges between our two countries. 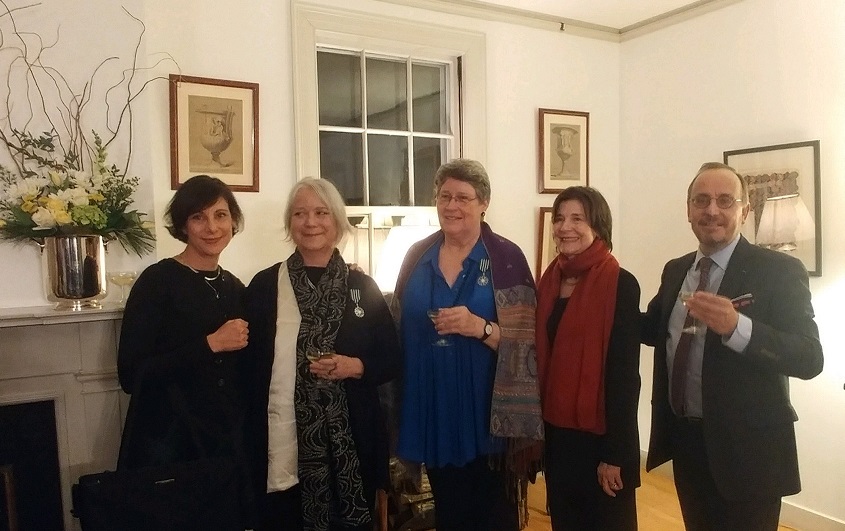 On Monday evening, at the Consul’s residence in Cambridge, the bostonian community of the arts and museums gathered around Consul General of France in Boston, Valéry Freland, as he was awarding Judith Barter and Pieranna Cavalchini the French national order "Les Arts et Lettres".

“Les Arts et Lettres” decoration, which was established in l957 recognizes eminent artists, writers, and other greats who have contributed significantly to furthering the arts in France and throughout the world.

"Our two recipients tonight could not be more deserving of this title!" said Consul General Valéry Freland during his speech.

Professor Judith Barter, a Chicago native, started her career at the Mead Art Museum in Amherst, Massachusetts, before joining the Art Institute of Chicago as the chair and curator of American Art. She worked consistently over the last four decades to promote the Arts on both sides of the Atlantic through the numerous exhibitions she organized, the courses she taught and the lectures she gave.

Ms. Pieranna Cavalchini has been a curator at the Isabella Stewart Gardner museum since 2001, in charge of preparing exhibitions which always receive critical acclaim. She also directs the Artist-in-Residence program at the museum for which she has invited international artists among them French ones such as Anne Nivat, Sophie Calle and Jean-Michel Othoniel.

Enjoy a few pictures of this great ceremony celebrating the arts in Boston and around the world, and the friendships they help creating, especially between France and the United States. 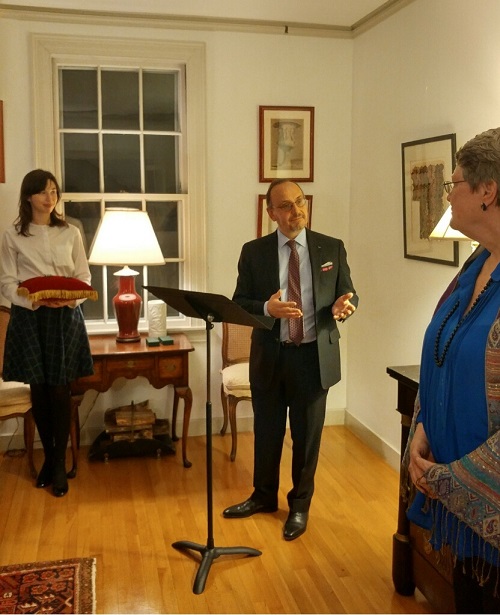 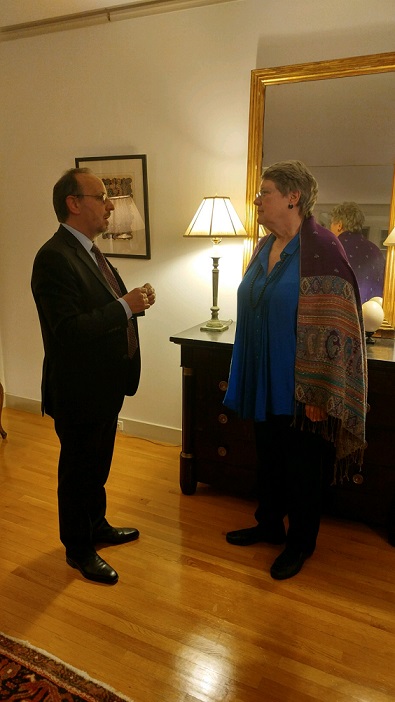 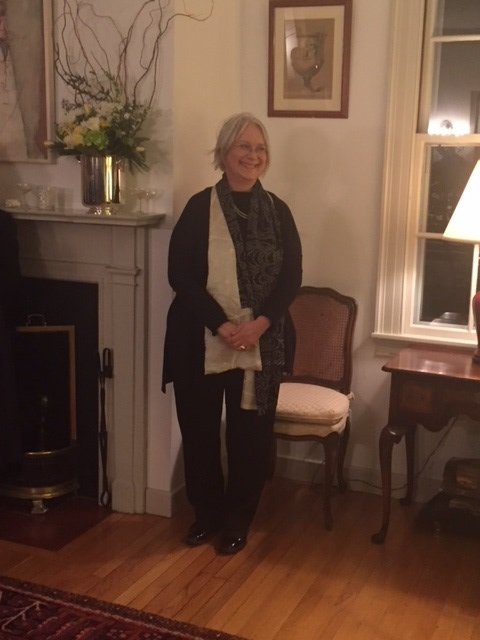 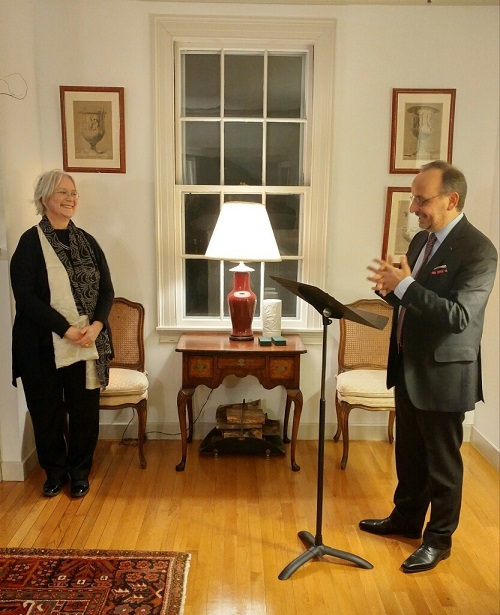 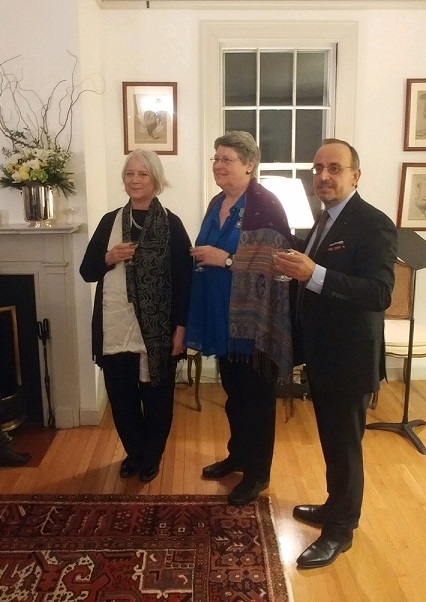 Thank you all for being with us tonight. I’m very pleased to welcome you to the French Residence in Boston.

Four months ago, we decorated two representatives of the Bostonian musical world, which is one of the key dimensions of the cultural life here in Boston. Tonight, we are gathered to pay tribute to another prominent facet of the Bostonian arts world, Fine Arts and museums, and also to honor two remarkable women who have done a lot for the arts in general, and for the artistic friendship between France and the United States in particular: Judith Barter and Pieranna Cavalchini.

Tonight, I will be very pleased and honoured to award them the French national order “les Arts et Lettres,” which was established in l957 and organized in 1963 by General de Gaulle. This award recognizes eminent artists, writers, and other greats who have contributed significantly to furthering the arts in France and throughout the world. Our two recipients tonight could not be more deserving of this title.

Allow me to begin with a quote that I have found very inspiring:“ I see a curator as a catalyst, […] accompanying the artists while they build a show, and a bridge builder, creating a bridge to the public.” These are the words of Hans-Ulrich Obrist, a Swiss Art Curator. And I could not think of a better way to describe what you have managed to achieve throughout your career.

Tonight, we would like to honor your constant efforts in creating this “bridge to the public,” and I think everyone here would agree with me, an artistic bridge between the United States and France.

A Chicago native, you started your career at the Mead Art Museum in Amherst, Massachusetts, before joining the Art Institute of Chicago as the chair and curator of American Art. You worked consistently over the last four decades to promote the Arts, through the numerous exhibitions you have organized, the courses you have taught and the lectures you have given.

Dear Dr. Barter, your solid educational background and long experience as a curator make you an impressive and inspiring Professor of Art History. You taught for many years at the University of Chicago and, since last year, students have had an opportunity to attend your classes at the University of Massachusetts in Amherst, where you yourself received your Ph.D. in 1991. The cycle is complete!

You also worked with prestigious museums on both sides of the Atlantic such as the National Gallery in Washington D.C., the museum of Fine Arts here in Boston, and, more recently, the Royal Academy in London, and even the Musée de l’Orangerie in Paris, where you worked with your French colleagues Guy Cocheval and Laurence des Cars, the former and the current President of the Musée de l’Orangerie and the Musée d’Orsay.

In 2016-2017, you curated an exhibition entitled, “America After the Fall” at the Musée de l’Orangerie. It was a tremendous success, providing the highest attendance of any exhibition in the history of the Orangerie. Worldwide, the exhibition was seen by 1.25 million visitors and received public as well as critical acclaim. This is only one example among others of your efforts to bring American art to a French audience and, more generally, to encourage the cultural dialogue between France and the United States.

Actually, one of the artists you have written extensively on, and on whom you organized a major exhibition in 1999, Mary Cassatt, is the epitome of this cross-cultural life and work between France and the US. Your book, Mary Cassatt: Modern Woman, released in 1998, has contributed to highlight the importance of this American expatriate who spent most of her life in France, and worked in close relationship with French artists such as Edgar Degas or Berthe Morisot. What you wrote remains the most complete book on Cassatt’s work and her relationships in France, and it was instrumental in bringing attention to this artist in my country.

Dear Judith Barter, you have forged a professional and personal link to the French culture so strong that it is only natural that we should recognize your extraordinary work by bestowing the “Chevalier des Arts et Lettres” award upon you. Chère Judith Barter, au nom de la Ministre française de la Culture, nous vous faisons chevalier de l’Ordre des Arts et des Lettres.

I am so glad to finally get the opportunity to meet you! I have heard so much about the exhibitions you have curated at the Isabella Stewart Gardner since you began in 2001, such as Luisa Rabbia’s Travels with Isabella in 2008, Charmaine Wheatley’s Souvenirs in 2016, and, just last year, Listen Hear: The Art of Sound. And I must confess that this museum –and particularly the cloister and its hydrangeas- is one of my favorite places in New England, and I don’t say this because its former and current directors, Anne Hawley and Peggy Fogelman, whom I greet, are with us this evening.

Dear Pieranna, you enjoy a great, solid and consensual reputation here in Boston, but also elsewhere on the East Coast, and this comes as no surprise to me. At the Gardner Museum, you are, as everybody in this room knows, in charge of preparing new surprising exhibitions that, by the way, never fail to receive critical acclaim. But you are also directing the Artist-in-Residence program that was created 25 years ago. For almost 17 years now, you have invited dozens of high-level international artists working in a wide range of disciplines, such as visual, literary, and performing arts. You have contributed to perpetuate Isabella Stewart Gardner’s legacy by providing these artists a magnificent, quiet and contemplative space to stimulate their creativity freely.

Among the happy few that have been invited to the Stewart Gardner in this program that you call a “vortex of thinking,” French artists are not left behind. You welcomed the writer and war reporter Anne Nivat, the conceptual artist Sophie Calle, and also the sculptor Jean-Michel Othoniel, who all returned to the museum after their stay for an exhibition or a discussion about their work.

Your love of French culture and interest in French arts did not begin at the Isabella Stewart Gardner Museum. Before your arrival in Boston, you had already worked on projects with great French artists such as Daniel Buren and Christian Boltanski; you had conducted cinema surveys with Jean Loup Pasek of the Centre Pompidou, and prepared the hundredth Venice Biennale with Jean Clair.

In an interview you gave to Berkshire Fine Arts in 2012, you insisted on the fact that the artists you were inviting to stay at the museum were not urged to create something to be presented in an exhibition. You said, quote: “We give [these artists] the gift of time, (…) to come, to explore the museum, to explore the city. We never ask anything of them in return.” Time is indeed a precious gift, and so is your faith in those you invite at the Stewart Gardner. We know you do not expect anything in return for what you have done throughout the years for France, for the arts, for the promotion of culture and for Isabella Stewart Gardner Museum. But since you have already been honored for you work, as you were crowned “Best Curator” by Boston Magazine in 2011, we thought it would be a loss not to seize this opportunity to publicly acknowledge how grateful France is for everything you have done to promote its arts and artists, and the unique relationship between France and the United States.

Dear Pieranna, your nomination as “Chevalier des Arts et Lettres” is a small token of our gratitude for everything you have done for the promotion of art, including French arts.