On Sunday, December 4, 2011 at 1:00 p.m. at Bunker Hill, the Massachusetts Lafayette Society hosted an event honoring the French Expeditionary Force that came to America in 1780 and participated in the final victory at Yorktown in October 1781.

This event, also sponsored by W3R-US – the Washington-Rochambeau Revolutionary Route – and the National Parks Service, included welcoming remarks by Mr. Christophe Guilhou, Consul General of France in Boston and Mr. Joseph De Bello, the NPS representative of the National Historic Trail from Newport to Yorktown.

There was a lecture by renowned military historian Robert Selig entitled “Boston’s French Connections & Contributions to the Victory at Yorktown.” 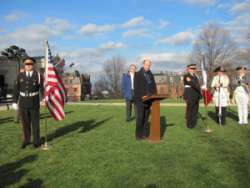