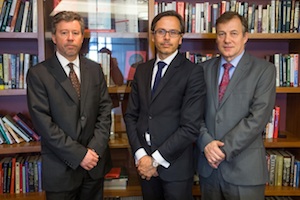 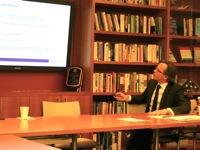 During his presentation, "Growth Potential & Economic Recovery: Comparing Europe and the United States," Mr. Lefeuvre commented on the monetary and fiscal policies that have caused such different growth trajectories in Europe and in the U.S. since the beginning of the recession. 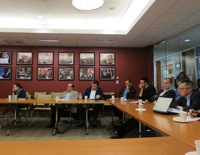 Guests enjoy a light breakfast during the presentation.

Mr. Lefeuvre discussed the reasoning and impact of such policies, focusing on the role of central banks and resource endowment (especially oil production) as potential ways out of the current economic crisis. He used the opportunity to compare Europe with the United States, commenting on the different roles of the European Central Bank and the Federal Reserve, and the difficulty of harmonizing economic policies within the EU.

Following his presentation, Mr. Lefeuvre answered several questions from the public, shedding light on the future of the Eurozone, the role of youth unemployment rates, and the future and potential of oil production in Europe.

Lefeuvre began his career in 1999 at CDC Marchés as an economist specializing in the American economy. In 2003, he was appointed Deputy Head Chief Economist of IXIS CIB. He has been the head of the global macro team within the Economic Research Department at Natixis since 2006.


This event was generously organized by:

The Francophile Club at the Harvard Kennedy School of Government