Four WWII American Veterans were decorated with the French Legion of Honor on September 21, 2017!

On September 21, 2017, at his residence, Valéry Freland, Consul General of France in Boston, decorated four World War II American Veterans with the Legion of Honor. 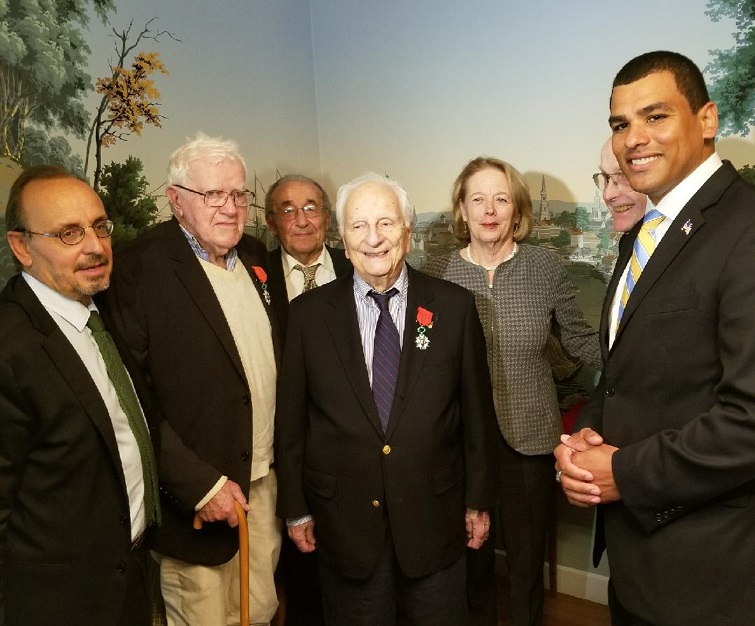 The ceremony took place in the presence of Congresswoman Niki Tsongas and Massachusetts Secretary of Veterans’ Affairs Francisco Urena.

The families and friends of Mr. Avak Avakian from Concord, MA, Mr. Richard Dinning from Natick, MA, Mr. Evarts Erickson from Weelfleet, MA and Mr. Charles Sahagian from Needham Heights, MA, all came to the Residence of France.

In a joyous atmosphere, the assembly honored these four heroes who contributed to the liberation of France in World War II. 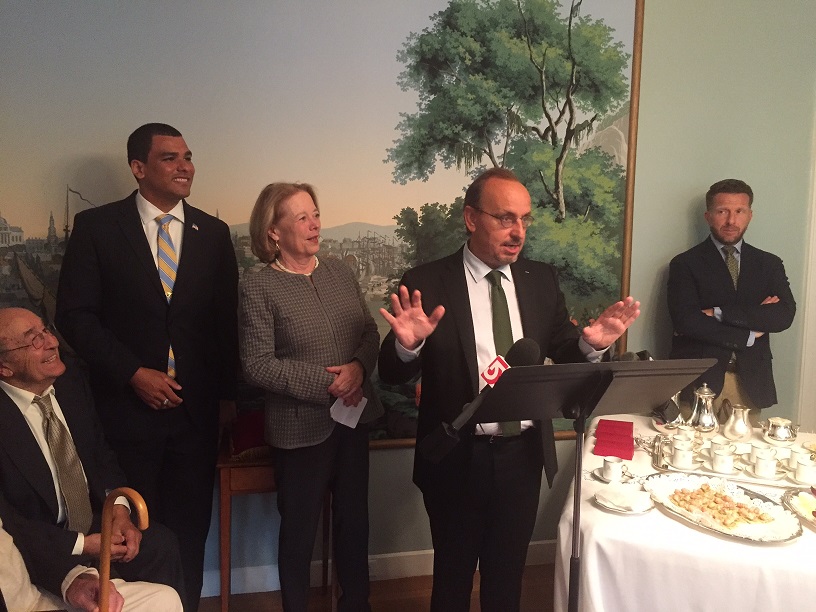 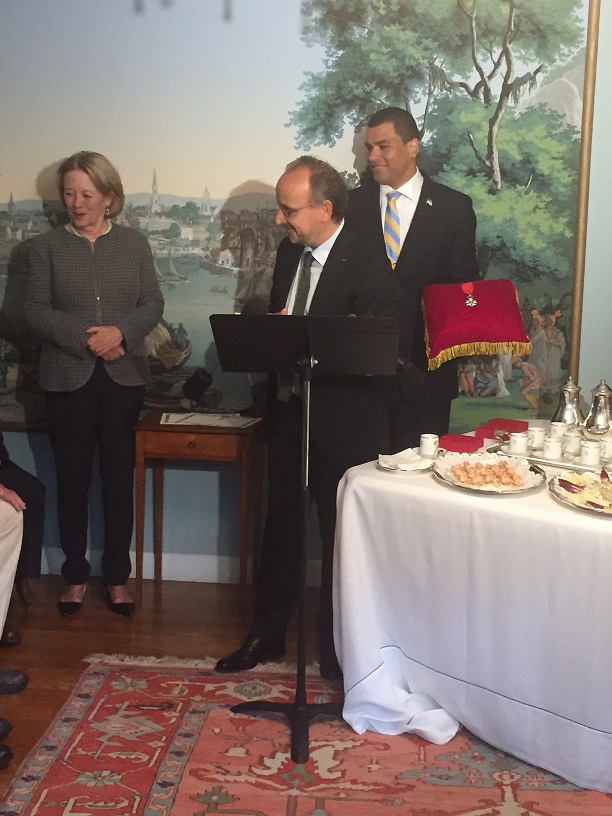 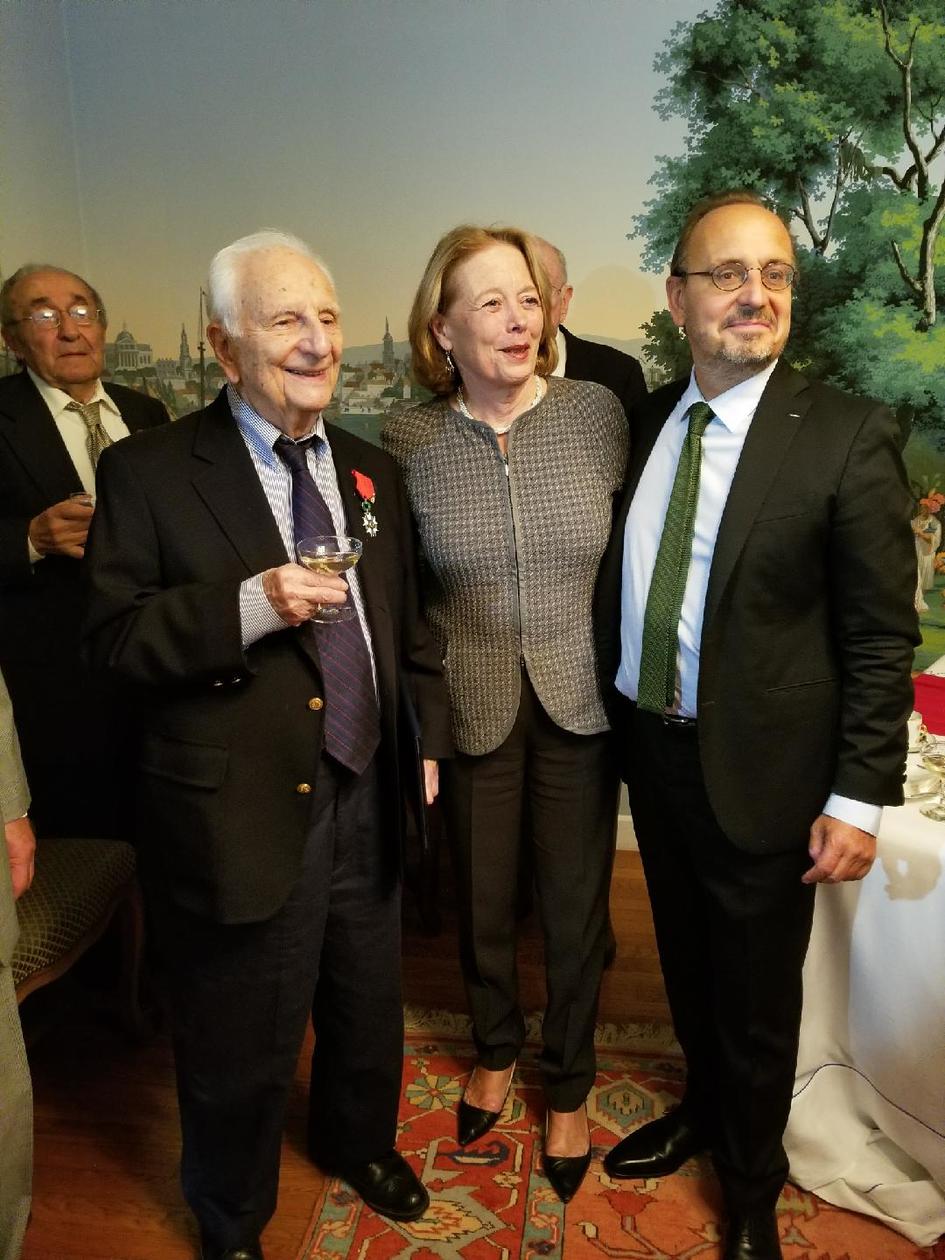 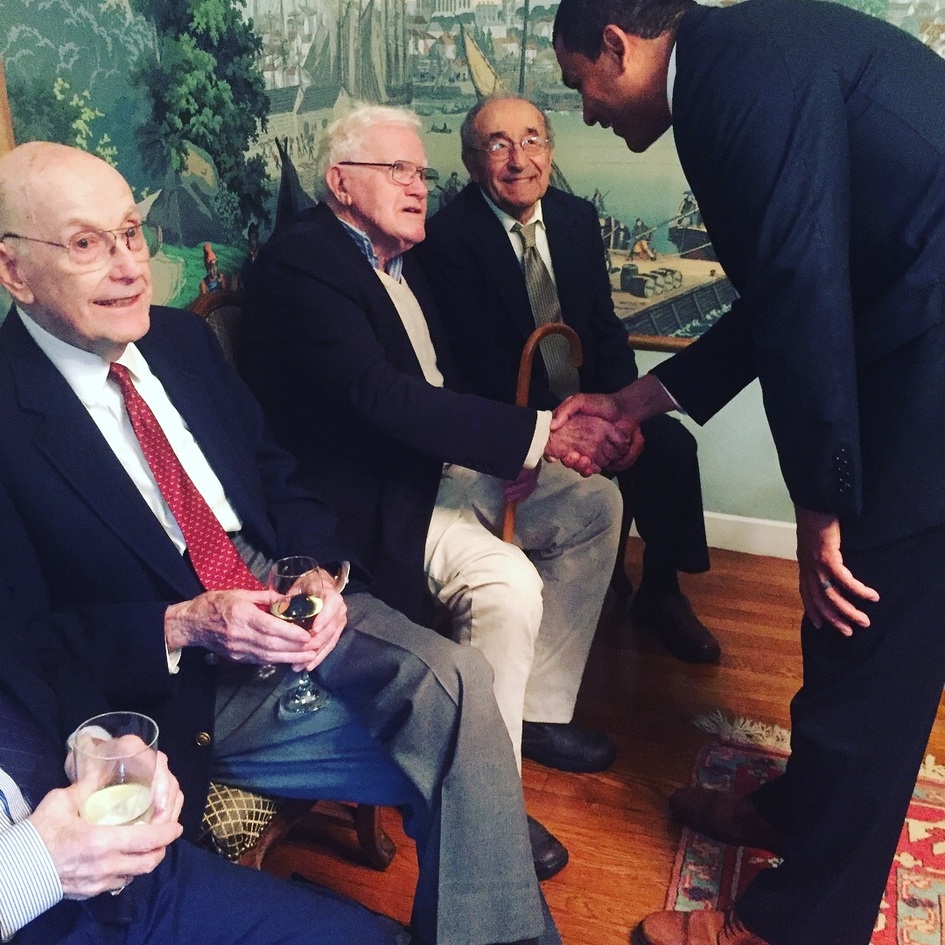 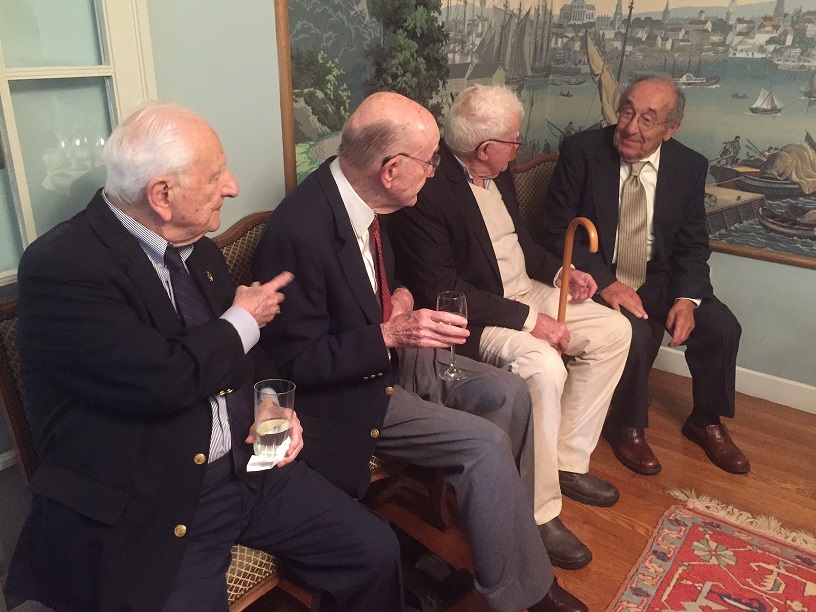 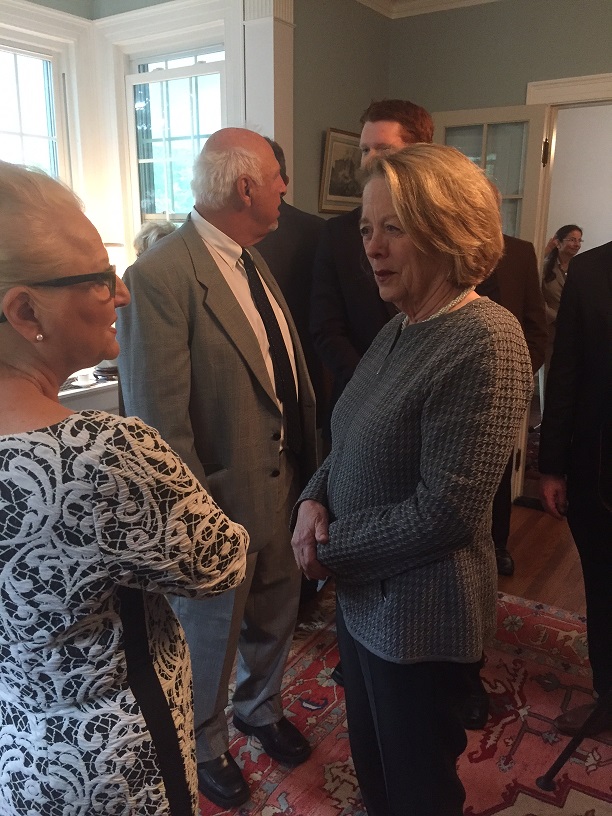 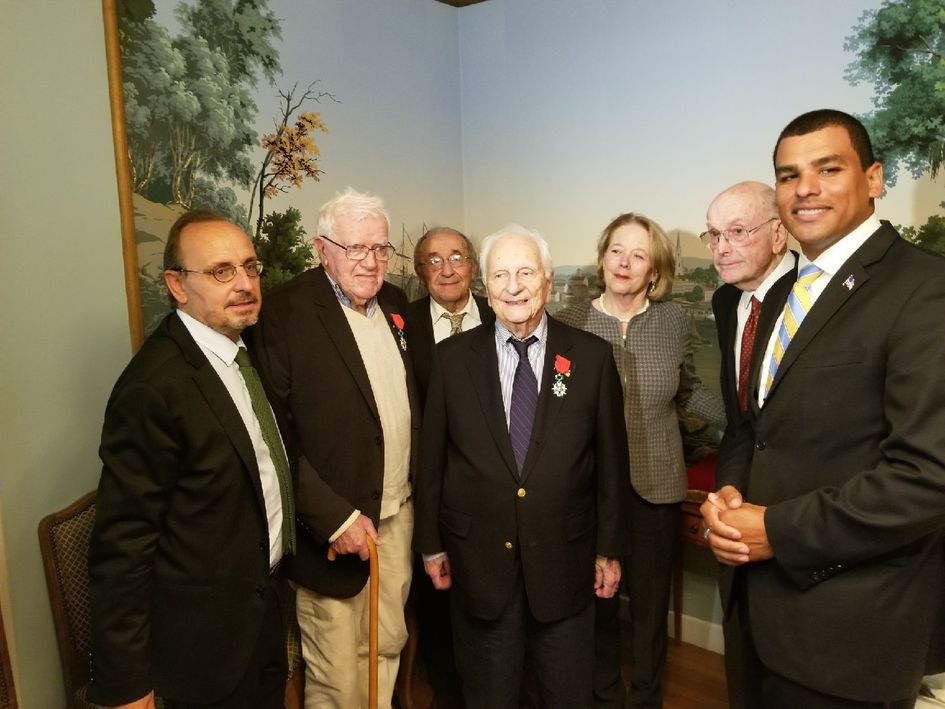 All four of them were selected to be awarded the Legion of Honor for their bravery and heroism, and for their outstanding contribution to the liberation of France in World War II.

• Captain Richard Dinning Captain Richard Dinning was a lead pilot of the B-17 airplane in the 351st Bomb Group of the U.S. Army Air Corps. Originally from Flint, Michigan, Captain Dinning honorably served in active duty from March 12, 1933 to December 2, 1945. Having flown as a pilot until the age of 83 and acquiring 5,000 flight hours, Captain Dinning believes that one of his most memorable experiences occurred during a mission in Austria following the end of the war in May of 1945. Serving as Pilot-in-Command, Captain Dinning flew to a former Luftwaffe airfield base in Linz, Austria in order to pick up French Prisoners of War (POW) who had been in German prison camps for over four years. When the group finally flew over the river crossing into France, Captain Dinning recalls that, “There wasn’t a dry eye in the airplane…” For his excellent leadership, Captain Dinning was awarded the Distinguished Flying Cross, the Air Medal with four clusters and the European African Middle Eastern Theater Service Medal.

• Sergeant Evarts Erickson Born in Brooklyn, New York, Sergeant Evarts Erickson enlisted in the U.S. Army on November 28, 1942. Sergeant Erickson was in active duty for two years serving as the Forward Observation Post and Communication Sergeant for the Battery “B” 39th Field Artillery Battalion. Sergeant Erickson’s unit landed in French Algeria before being sent to Italy and finally landing in St. Tropez. Sergeant Erickson was cited for his exceptional courage while in Italy, where he refused to leave his post in order to continue giving directions for artillery fire. The school house that he was located in suffered 20 direct hits and approximately 100 enemy shells landed in his vicinity in only one hour! For his devotion to duty, Sergeant Erickson was awarded the Bronze Star Medal, the European-African-Middle Eastern Service Medal with an arrowhead and the Good Conduct Medal. Following the war, Sergeant Erickson stayed in Paris and earned a certificate in French Civilization from the very famous Sorbonne University.

• Private Charles Sahagian A native of Dorchester, MA, Private Sahagian served as a rifleman for heavy weapons in the 3rd Battalion, 347th Regiment, 87th Division of the U.S. Army from January 25, 1944 to February 4, 1946. While clearing German units in the Moselle region in France, General Patton gave instructions to Private Sahagian’s Battalion to recapture the city of Saint Hubert, Belgium. This 30-hour march from France to Belgium was recognized as one of the fastest and furthest movements of infantry in U.S. army records! Honorably discharged in February, 1946, Private Sahagian received the Purple Heart, three Bronze Star Medals, the WWII Victory Medal and the American Campaign Medal. Following his military service, Private Sahagian led an impressive career serving as a U.S. Representative to NATO specializing in military materials research. He then served as a U.S. Representative to NASA and a Supervisory Physicist for the U.S. Department of Defense.

Established in 1802 by Emperor Napoleon Bonaparte, it is exclusively awarded in cases of exemplary military and civilian services. It is the oldest and highest honor in France. The Legion of Honor is awarded by decree of the President of the French Republic, Mr. Emmanuel Macron. Since the 60th anniversary of D-Day, France recognizes every year many American Veterans of the World War II for their courageous service.