On Monday, August 6, Curiosity, NASA’s newest rover, successfully landed on Mars. Did you know that French scientists contributed to this historic accomplishment?

Mars Science Laboratory (MSL) is a mission of exploration of Mars using a remote-controlled rover called Curiosity. The mission was launched on November 25, 2011, from Cap Canaveral, Fla., and travelled 104 million miles in space before landing inside the Gale Crater of Mars on August 6, 2012.

During its lifespan, which is expected to last two years, Curiosity, the heaviest (900 kilograms) and most complex rover yet sent to Mars, will notably investigate any signs of organic components, study the climate of the planet and collect data for future human missions.

France took part in the development of two of the ten scientific instruments carried by Curiosity. 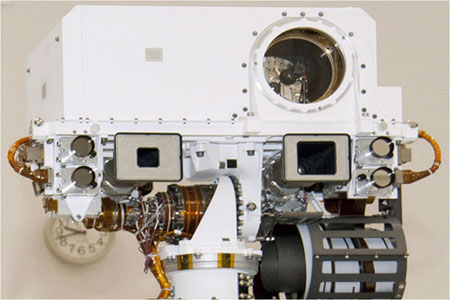 On the top of the remote sensing mast on Curiosity are the optics of the Chemistry Camera (ChemCam), which includes a French-built laser and a telescopic camera. (NASA/JPL-Caltech/LANL)

The first, dubbed the "ChemCam," for chemical camera, is able to analyze the composition of rocks and soils from 30 feet away. A laser, located on the mast of the rover, fires a pulse at the target, which melts and emits light. This light is analysed by a spectrometer, used to identify the type of atoms within the rock or soil, helping characterize Mars’s geological make-up. The laser inside ChemCam was conceived by the French Institute of Research in Astrophysics and Planetology (IRAP) in the southwestern French city of Toulouse. This laser is the latest testament to French expertise in the field of optics. (Also see "Drawing With the Eyes: Scientists Design New Vision Tool," here).

The second instrument, Sample Analysis at Mars (SAM), is designed to analyze Mars’s atmosphere and minerals and to detect carbon compounds, which could be a sign of the existence of past or present forms of life on the Red Planet. The French National Center for Scientific Research (CNRS) and the Atmosphere, Environment and Space Observations Laboratory (LATMOS) worked together to build one of the components of SAM, the gas chromatograph (SAM-GC). 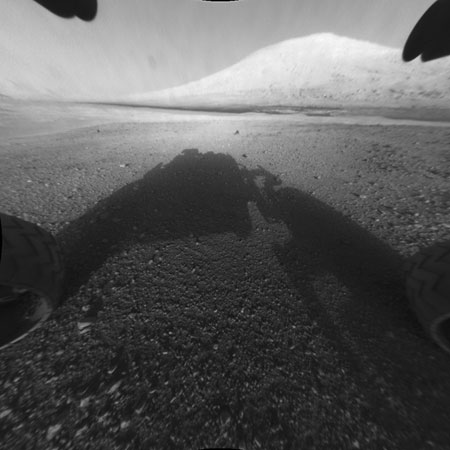 The French National Center for Space Studies (CNES) coordinated France’s contribution to this program. A delegation of CNES representatives, including its president Yannick d’Escatha, followed the landing of Curiosity from NASA’s laboratory in California.