Come and join us to celebrate the diversity of the French-speaking world!

Francophone cultures will be celebrated throughout the world during March 2013.

From the shores of North Africa to the coasts of Québec and from Haïti to New Hampshire, you will travel through many cultures, but the common language is French! The Consulate General of France in Boston and its partners have organized numerous events from March 1st to 31st all across New England. For complete information on the whole program of events, visit the official site of the Fête de la Francophonie. 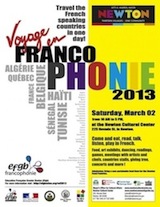 At the Newton Cultural Center from 10am-5pm

Visit the francophone regions and countries of several continents in one day! Come with your family to eat, read, listen, play in French. Exhibits, dance, concerts, recitals, games, encounters with artists, publishers and chefs, country stands…

Exhibit of paintings by francophone artists

Workshops for children and for adults/teachers on French-language literature for young people, presented by L’Ecole des Loisirs

Website for the event: http://efgboston.org/vef2013
Presented by Education Française Greater Boston, with the support of the French Consulate General of France in Boston.

As part of the Fête de la Francophonie, the Consulate General of France in Boston and the partners of the “Café des Sciences” invite you to join fellow students, researchers, and entrepreneurs for “un Petit-déjeuner scientifique.”

Join us for a light breakfast and an enlightening presentation in French by guest Sylvain Gioux, the leader and principal investigator of the Biomedical Optics and Engineering laboratory at the Center for Molecular Imaging of the Beth Israel Deaconess Medical Center in Boston. Dr. Gioux’s talk will be titled, “When the Invisible becomes Detectable: Surgery of the Future.”

This event is presented in partnership with the French-American Chamber of Commerce of New England, Hubtech21, the Québec Delegation, Swissnex Boston, and the CCEF, as well as with the support of the French Cultural Center of Boston. 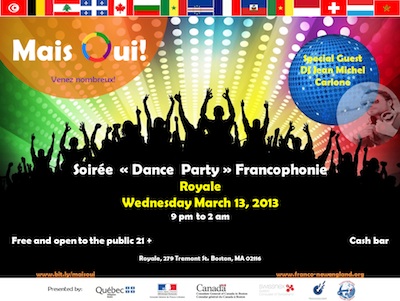 This year, the official Francophone soirée of Boston will take place on March 13, 2013 at Royale, kicking off at 9pm with the French beats of DJ Jean Michel Carlone (coming straight to Boston from Nikki Beach Club in New York). Join us for this annual evening of elegance and fun, as well as the chance to socialize with French, American, and other “international” students and young professionals from the area!

For more information, please visit the Facebook page of the event.

For information on the films and showtimes: 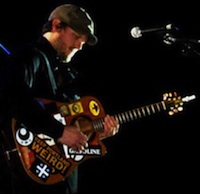 The Alliance Francaise of Providence along with the American Association of Teachers of French, the Museum of Work and Culture, the French-American School and the French Consulate in Boston is organizing the annual Francofête at the Providence Art Club with world-class singer and musician Eric John Kaiser.

Supported in part by the Consulate General of France in Boston.

Join us for a special ceremony as we raise the official Francophone flag!

Save the date for your state, and look out for more information to come.