Home > French Ambassador Delattre at the Annual Convention of the "Federation of (...)

Every year the Federation of Alliances Françaises USA gathers to celebrate its members and partners, engaging in an exciting and educational conference featuring panel discussions, informative workshops, featured speakers, and special guests. This year the Annual Convention was hosted by the Alliance Française of Providence, the nation’s third oldest Alliance Française, from the 11th until the 14th of October, 2012.

The Federation of Alliances Françaises USA, which celebrates its 110th anniversary this year, is dedicated to the enduring friendship between France and America. The Federation serves as a bridge between the Alliances in the United States and the Fondation Alliances Françaises in Paris, continuing a partnership with the sustained mission of supporting the French language and French speaking cultures around the globe.
The Fondation is dedicated to supporting the American network of Alliances, which educates its members and constituents through the sharing of Francophone literature, art, and history, which together contribute to the multicultural richness of a world with 200 million French speakers. 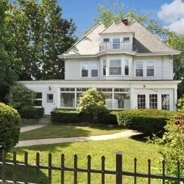 Consul General Fieschi revealed the new plaque that lists the many donors who contributed to the purchase of the building before joining Alliance patrons for a special dinner with singer Victoria Richter. Also participating in the opening ceremony are Paul Jabour, State Senator, Marie-Claude Francoeur, Quebec Delegate in Boston, and Philippe Savadogo, Ambassador of the Francophonie to the United Nations.

- On Friday, October 12th, French Ambassador François Delattre spoke at a luncheon on the importance of the "Alliance française" in the United States. On that occasion a special award, the Prix Charbonnier, was bestowed upon famed historian and Pulitzer Prize winner David McCullough for his contribution to the history of the American Revolutionary War and the role of the French troops during that conflict. Mr. McCullough also recently wrote a beautiful book entitled “The Greater Journey: Americans in Paris”.

Other special events include presentations by directors of Alliances from all over the nation, workshops with eminent scholars of francophone culture, and speeches by notable members of the French-American business community.

- On Saturday, October 13th, after a full day of workshops, there was an evening gala at the magnificent Providence Art Club overlooking the City. Singer and actress Irene Jacob (Palme d’Or in Cannes for "La Double Vie de Veronique") sang with her group.