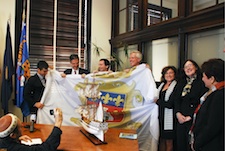 From the left: Miro Weinberger, Mayor of Burlington, François Delattre, Ambassador of France to the U.S., Fabien Fieschi, Consul General of France in Boston, and Ernie Pomerleau, Honorary Consul of France in Vermont

On October 17th, 2012, François Delattre, Ambassador of France to the United States, and Fabien Fieschi, Consul Général of France in Boston, met with Mayor Miro Weinberger of Burlington (Vermont) and members of last week’s Burlington Delegation Mission from the city of Honfleur, France.

The group met to discuss the next steps towards establishing a "Sister City" relationship between Honfleur and Burlington, which would create strong economic, educational, and cultural connections between the two cities.

The Burlington Delegation visited the city of Honfleur from October 8-10, and members included local, state, federal, and community leaders from Vermont such as Senator Patrick Leahy, Tom Torti, President of the Lake Champlain Regional Chamber of Commerce, and Anne Miller, Cultural Attaché at the Consulate General of France in Boston.

During the Burlington Delegation’s visit to France, the members gave Michel Lamarre, Mayor of Honfleur, a replica of Samuel de Champlain’s ship, which sailed from Honfleur to Quebec four centuries ago. Returning the gesture, gifts of a replica sailing vessel and the Honfleur flag were presented to the City of Burlington by the French delegation.

More photos of the event: 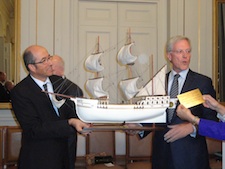 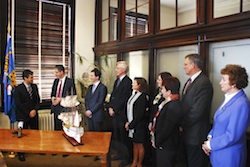