François Delattre, the Ambassador of France to the United States, and Fabien Fieschi, the Consul General of France in Boston, visited Vermont October 16th, and Wednesday, October 17th, to celebrate the 60th Anniversary of the Vermont Council on World Affairs (VCWA).

The VCWA, founded in 1952, promotes awareness of the world and its people, places and cultures through educational programs and presentations and by hosting visiting delegates from around the world. The organization advocates global understanding with the recognition that the future of the people of Vermont is inextricably linked to the world beyond state borders. 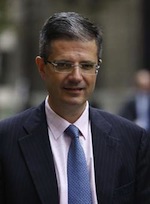 October 16th, Ambassador Delattre attended a lunch organized by the Alliance Française of the Lake Champlain Region (AFLCR) and the VCWA at the beautiful Shelburne Museum.

Tuesday afternoon, Ambassador Delattre attended a reception at the Essex Hotel, an event hosted by Ernie Pomerleau, Honorary French Consul for Vermont, who introduced the Ambassador. The reception, which was free and open to all friends and guests of the VCWA, was a special celebration of the organization’s 60th Anniversary.

Ambassador Delattre’s remarks were at once conclude the VCWA’s Ambassador Series and commemorate this special anniversary, highlighting the strong relationship between the Lake Champlain region and the francophone community, a bond that is now over 400 years old. The VCWA wanted to commemorate this landmark year with a true celebration, and the Ambassador’s visit provided the unique opportunity to honor the region’s strong relationship with the country of France as well as with the Quebec region of Canada.

Later that evening, Ambassador Delattre attended a dinner at Saint Michael’s College, hosted by College President John J. Neuhauser, a mathematician and a former academic vice president of Boston College, and Marilyn Cormier, Chair of the VCWA. United States Senator Patrick Leahy attended the dinner with his wife, Marcelle Leahy, and made a speech to welcome the Ambassador and marked the special occasion of VCWA’s 60th Anniversary.