On the week of February 8, 2016, the Ambassador of France to the United States, Gérard Araud, visited Boston and its region from Monday 8th to Wednesday 10th. The Ambassador embarked on a substantial two-day tour during which he met with eminent State and municipal executive officials Governor Charlie Baker and Mayor Martin Walsh, gave policy talks and addresses at some of New England’s most prestigious institutions of higher education, namely Wellesley College and the Harvard Kennedy School of Government, and attended and conducted numerous French-American scientific and business cooperation events and meetings. The Ambassador also took the time to visit the French Cultural Center of Boston and to strengthen France’s already solid relations with the Bostonian academic landscape, meeting with the President of Northeastern University and touring the University’s nanotechnology laboratories.

On Tuesday 9th, the Ambassador was greeted by Massachusetts Governor Charlie Baker at the Massachusetts State House. The Ambassador and the Governor exchanged gifts and engaged in a fruitful discussion in the Governor’s office, along with Valéry Freland, Consul General of France in Boston, and Karine Dognin-Sauze, vice-President of the Grand Lyon metropolis.

On the following day, Wednesday, February 10, the Ambassador met with Boston Mayor Martin Walsh at Boston City Hall, where they partook in a private meeting. The Ambassador then attended the signature of a Memorandum of Understanding between the cities of Boston and Lyon, the latter being represented by Karine Dognin-Sauze.

Talks and Addresses at Prestigious Institutions of Higher Education 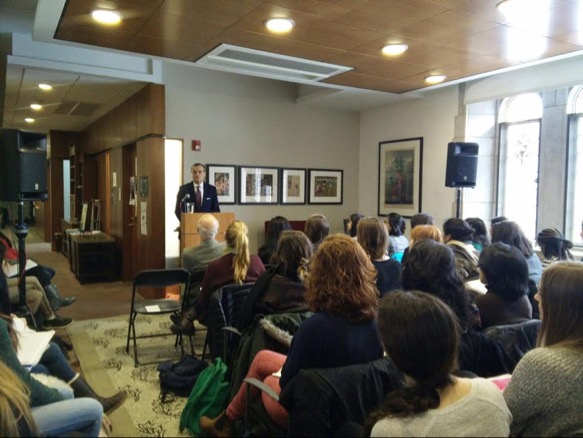 The Ambassador had been invited to give a talk at Wellesley College on the morning of Wednesday, February 10 by Anjali Prabhu, Director of the Newhouse Center for the Humanities and Professor of French. Upon his arrival, the Ambassador was greeted by H. Kim Bottomly, President of Wellesley College, Andrew Shennan, Provost and Dean of the College and Professor of History, and Anjali Prabhu, with all of whom he had a discussion before being escorted to a full Green Hall to give a talk in front of a dense crowd about “French Foreign Policy in an Unstable World”. During his visit at Wellesley, the Ambassador also took the time to meet with Professor of Sociology Smitha Radhakrishnan to discuss the themes of gender, class and race through the prism of “Nations in Intersectional Perspective” and with a group of professors and students working closely together to organize a Gender Studies’ Festival exploring the role of women as “Agents of Change”. 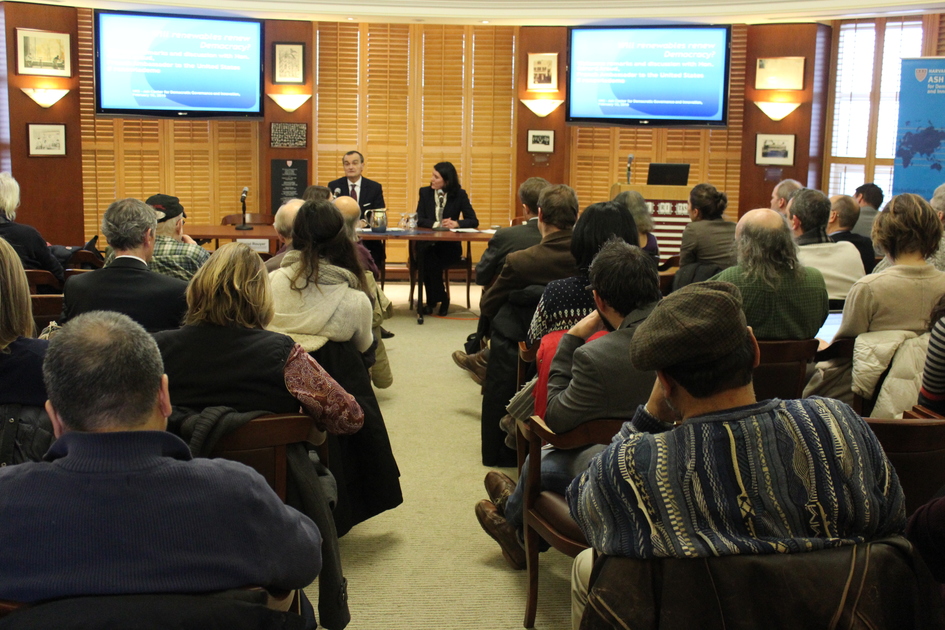 On the afternoon of Wednesday 10, the Ambassador was welcomed by Political Science and International Relations Professors at the Harvard Kennedy School of Government, among whom was Murielle Rouyer, Professor of Political Science at the University of Nantes and Adjunct Professor of Public Policy at HKS, who had solicited the Ambassador to give the welcome remarks at a panel discussion organized by the Ash Center for Democratic Governance and Innovation and dedicated to the theme of ecological democracy. In his opening address, which took place in a crowded out Allison Dining Room, the Ambassador discussed the crucial stakes tackled during the COP 21 climate talks, reminding the audience that “cities and citizens have a role to play in making the Paris agreements work”. Following the introductory remarks, the panel of experts engaged in a discussion on the democratic opportunities in renewable energies from a transnational perspective. 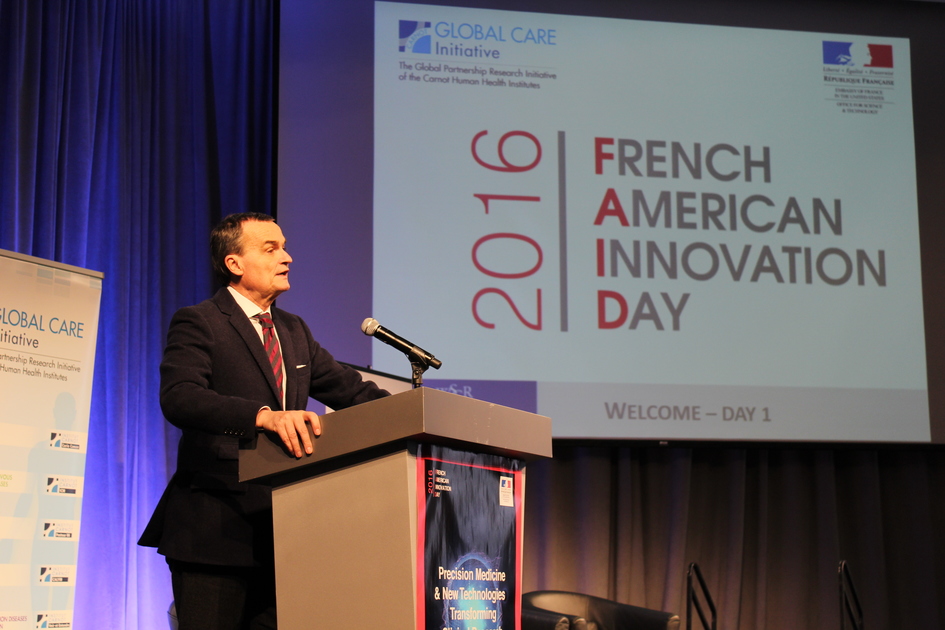 On the week of February 8, the Ambassador kicked off two French-American cooperation events. On Tuesday, February 9, in front of a crowd of 300 researchers, government representatives and businessmen, the Ambassador gave the opening address of the 15th Annual French-American Innovation Days, dedicated this year to the theme of Precision Medicine and taking place at the Massachusetts Institute of Technology Media Lab, before meeting with Frenchmen Yves Agid and Alexis Brice, respectively founder and CEO of the Institut du Cerveau et de la Moelle épinière — ICM (Brain & Spine Institute). On the previous day, Monday, February 8, the Ambassador had attended the launch of the Big Booster Startup Program, co-organized with the Startup Accelerator MassChallenge, along with the Consul General and a delegation of public officials and entrepreneurs from Lyon. There he launched the MassChallenge-Big Booster Startup Competition, giving a talk about France’s Competitivity and Innovation Industry. 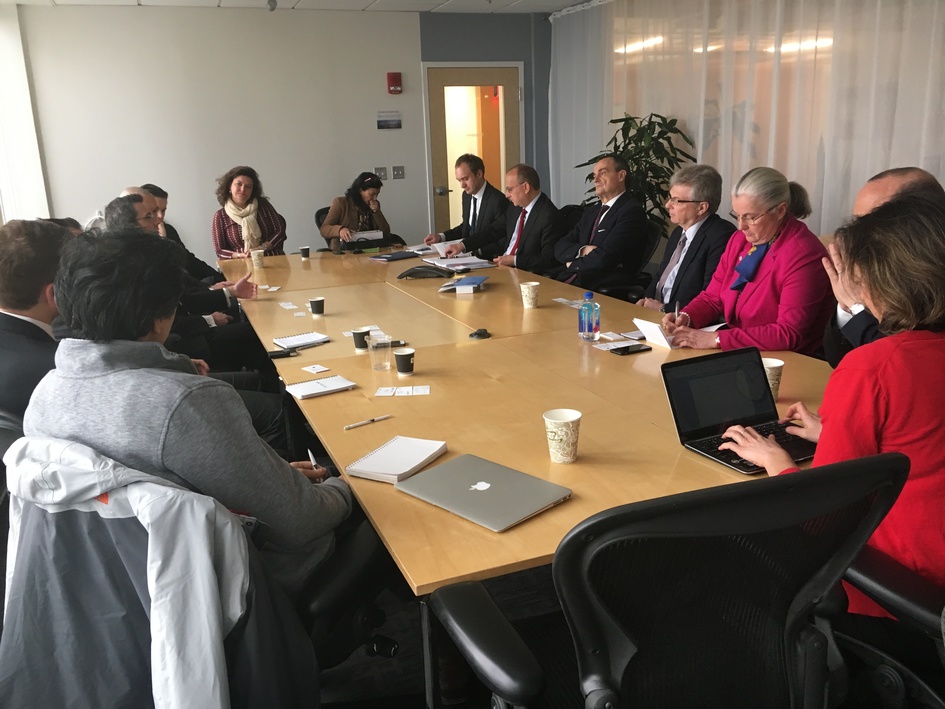 On February 9th, the Ambassador also met with Tim Rowe, Director of the Cambridge Innovation Center (CIC), with French Startups hosted by CIC and with the President of the Conseillers du Commerce Extérieur New England Chapter, Isabelle Estebe. In addition, the Ambassador conducted at CIC a meeting with French and American postdoctoral students regarding university competitiveness, student mobility and fight against discrimination in French higher education. Topping this day dedicated to French-American cooperation programs, the Ambassador had a productive discussion with Joseph Aoun, President of Northeastern University, and took a tour of the University’s nanotechnology laboratories. 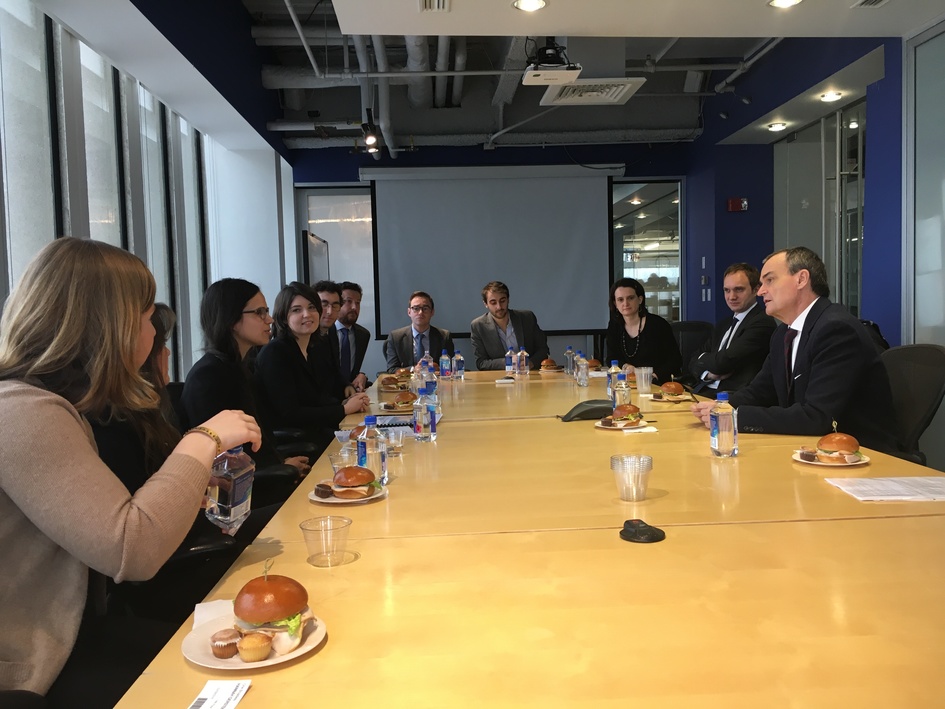 On the afternoon of Tuesday, February 9, the Ambassador was greeted at Boston’s French Cultural Center (FCC), by Catheline van den Branden, President and Executive Director of the FCC, and by members of the FCC board. There, the Ambassador had the chance to discover America’s second largest private collection of French documents (books, films, etc.) and the different facilities of the Center (library, teaching center, events rooms) dedicated to the promotion of French language and culture.

The Ambassador’s visit has proven to be extremely fruitful: it helped deepen further the strong relationship uniting France to New England and it reaffirmed France’s commitment to consolidate and expand scientific, academic, business and cultural cooperation programs with the United States.

Please find all the pictures of the Ambassador’s visit on the Consulate Flickr.