On September 11th the French Cultural Center and the French-American Chamber of Commerce of New England co-hosted a reception to honor the arrival of the new Consul General of France in Boston, Mr. Fabien Fieschi.

Members of the French-American business and cultural communities of Boston joined members of other French associations of the region at the French Cultural Center to welcome Mr. Fieschi, who assumed his post on August 20, 2012.

In a speech, Mr. Fieschi described his reasons for choosing to lead the French diplomatic mission to Boston. Pleased to be in New England, the Consul General spoke of Boston’s reputation as a prominent finance and biotechnology hub, adding that he was excited to serve in such an important cultural center with such a strong French community. 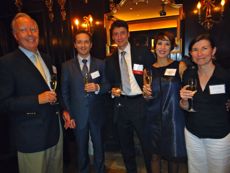 A biography of Consul General Fieschi can be found here.