Welcome to the “French Corner,” the Consulate’s monthly rendez-vous dedicated to the promotion of France’s rich cultural heritage! This month, discover the beautiful region of Aquitaine, located in the southwest of France! 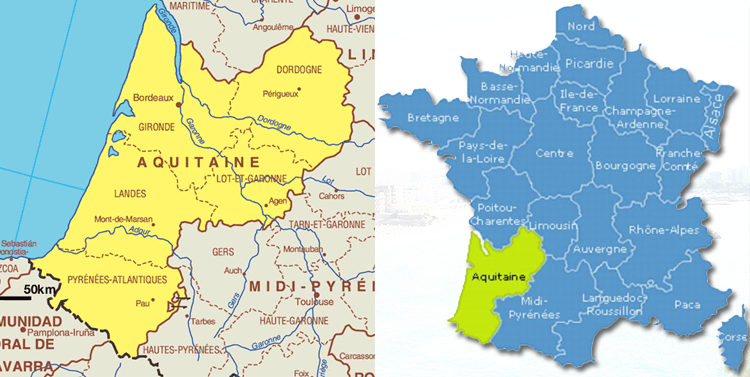 “Bordeaux is the capital city of Aquitaine which is one of the greatest historical regions of France. This region is also one of the largest and most diverse regions of France, stretching from the foothills of the Massif Central in the north, to the Spanish border in the south, a distance of over 300 km.” (about-france.com)

“[With the exception of] the Pyrenees Mountains, which rise in the south, lowlands predominate in Aquitaine. The highest point in the région is the peak of Midi d’Ossau (9,465 feet [2,885 metres]). Most land, however, lies below 1,600 feet (500 metres), and a significant percentage is forested; Landes is one of the most densely forested départements in France. Chief rivers include the Adour, Dordogne, and Garonne; the last flows northwest through Bordeaux, then joins the waters of the Dordogne to become the Gironde estuary.” (Encyclopedia Britannica)

“In Julius Caesar’s description of Gaul, “Aquitania” was an area extending from the Pyrenees to the Garonne River. The Roman emperor Augustus (reigned 27 bc–ad 14) made it a Roman administrative district, and its borders were extended as far north as the Loire River and east to the Massif Central."

Numerous English monarchs, including William I (the Pious), Eleanor of Aquitaine, and Richard I of England would be in possession of Aquitaine over the course of history. For quite some time, Aquitaine “was united to the English crown and henceforward followed the fortunes of the English possessions in France. Aquitaine, as it existed under the English kings, stretched (as of old) from the Loire to the Pyrenees, but its extent was curtailed on the southeast by the wide lands of the counts of Toulouse. The regions [of Guyenne, Gascony and Aquitaine] were completely reunited to France by the end of the Hundred Years’ War, in the mid-15th century. During the French Revolution, Aquitaine became one of many provinces reorganized into smaller départements.” (Encyclopedia Britannica) 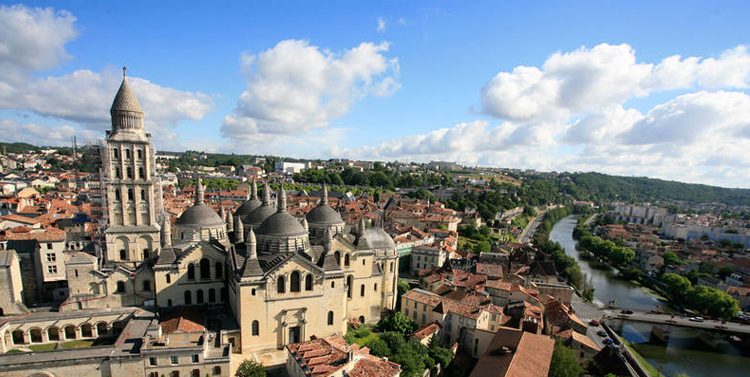 “In existence since neolithic times, [Périgueux] later became an important Roman centre. The town suffered a great deal in the Middle Ages through the Hundred Years War and other conflicts in the region, then had a ’rebirth’ - and much construction in the town dates from this time - in the 16th century. From the 18th century onwards, Perigueux continues to be an important centre for the region.” (North of the Dordogne) “Sights include the remains of a Roman amphitheatre (known locally as the arènes romaines) — the centre of which has been turned into a green park with a water fountain, the remains of a temple of the Gallic goddess "Vesunna", and a luxurious Roman villa.” (Wikipedia) 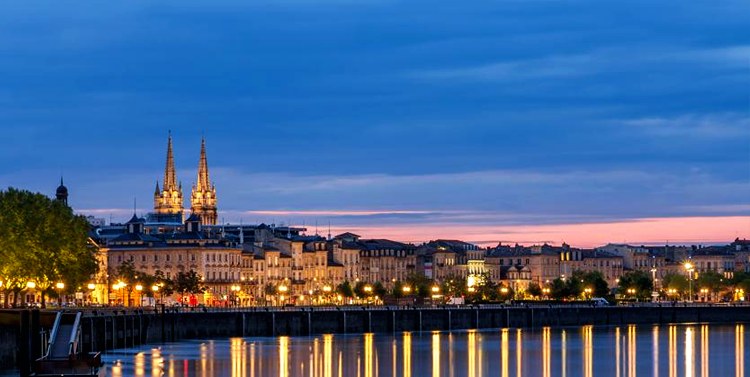 "Bordeaux is known throughout the world thanks to its prestigious wines. But this region holds other gastronomic surprises coming both from its magnificent inland and the rich Atlantic coast. In Bordeaux, the splendid regional capital, you can taste a plate of the fresh oysters du jour and a grilled entrecôte steak sprinkled with chopped parsley while enjoying a nice bottle of white wine from Entre-Deux-Mers or a red from Saint-Émilion du Libournais. And, of course, you can’t discuss Bordeaux without mentioning its exceptional vineyards. Let us mention just a few to refresh your memory and your palate: Premières Côtes de Blaye in Bordeaux, Entre-Deux-Mers, Sauternes in Graves, Saint-Émilion and Pomerol in Libournais, Saint-Julien, Saint-Estèphe, Pauillac and Margaux in Médoc.” (france.fr) 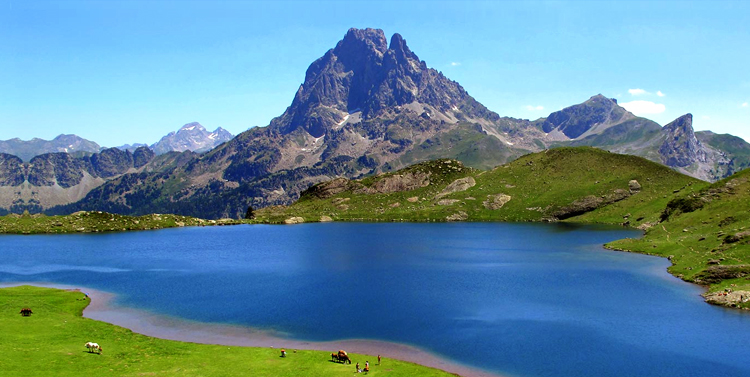 "The Pyrenees are a mountain chain in southwestern Europe that consists of flat-topped massifs and folded linear ranges. It stretches from the shores of the Mediterranean Sea on the east to the Bay of Biscay on the Atlantic Ocean on the west. The Pyrenees form a high wall between France and Spain that has played a significant role in the history of both countries and of Europe as a whole. The range is some 270 miles (430 kilometres) long; it is barely six miles wide at its eastern end, but at its centre it reaches some 80 miles in width. The highest point is Aneto Peak, at 11,169 feet (3,404 metres), in the Maladeta (Spanish: “Accursed”) massif of the Central Pyrenees." (Encyclopedia Britannica) 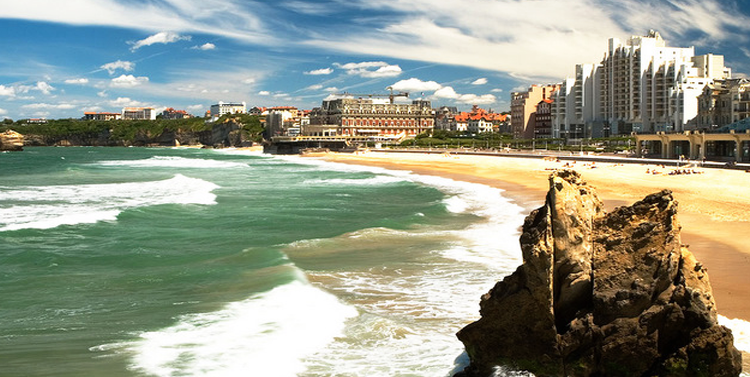 "Known for its famous beaches, therapeutic water and a thriving surf scene, Biarritz offers visitors a unique atmosphere. This is a place were posh restaurants and spas live harmoniously side-by-side with laid-back pizza joints and surf shops.The atmosphere in Biarritz is rather mixed, but in a good way. The town is comprised mainly of grand houses used by the wealthy as summer retreats. It has an upscale feel to it that is balanced off nicely with a more relaxed and easy-going surf culture that has a long history here. This interesting contrast forms part of Biarritz’s identity. Surfing is not just a very popular activity in Biarritz, but actually has deep roots here too. Although not proven, it has been said that surfing in Europe began in 1957 on the beaches of Biarritz, on the Plage de la Côte des Basques to be more exact." (Eusko Guide) 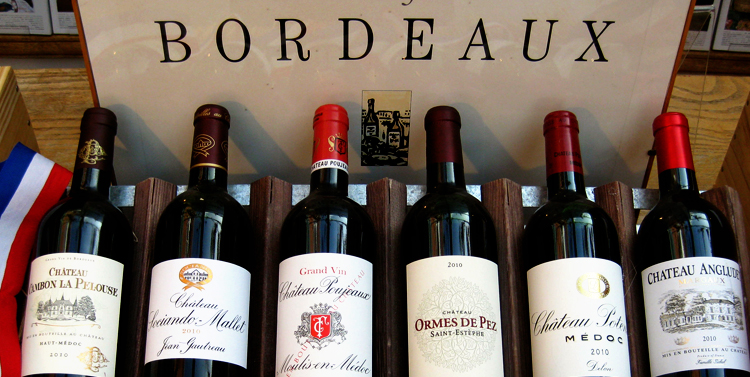 “The traditional cuisine of the seaside Pays Basque, or Basque Country, is full of tasty, colorful fish and shellfish, which are often red as if rubbed with a piment d’Espelette (a pepper). This pepper is found everywhere. It is the main ingredient in a local pepper dip as well as in piperade, where it is cooked with tomatoes and onions. Produced all over the region, ham can be found at all meals and in every season. As for foie gras, made either of duck or goose liver, it is prepared here as it is in other major farming regions (Landes, Gers, and Lot-et-Garonne): the bird is force-fed and then the liver is cooked in the traditional way, preserved in its own fat." 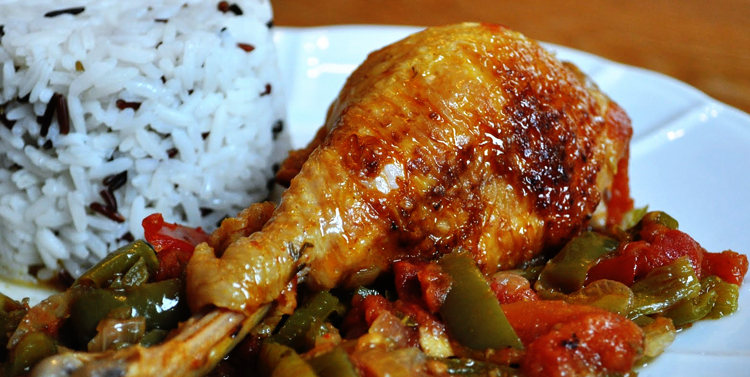 "You must try some magret de canard (duck breast), simply grilled and served with potatoes, ceps, or fruit. Another traditional and equally delicious dish is poulet basquaise (Basque-style chicken). Sautéed pieces of chicken are served with a savory sauce of tomatoes, onions, and peppers, all simmered with a glass of white wine." (france.fr)

French Corner is our monthly rendez-vous where we showcase a French region and introduce you to its highlights and secrets, appeal to your palate and culinary talents with our local recipe of the month and highlight the caliber and competitiveness of France’s best schools and universities in the region! We use also this opportunity to interview one of our expats currently living in the region of New England.