This November, your monthly rendez-vous, the French Corner, is taking you on a trip around the Rhône-Alpes region! Stay tuned for our next post about the Culinary Institute Paul Bocuse! 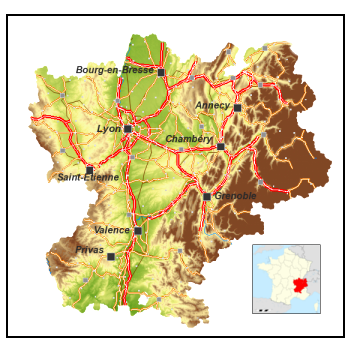 Our beautiful Rhône-Alpes region is part of a new administrative "Region" called Auvergne-Rhône-Alpes since 2016. Located in the eastern part of France, it has a common boarder with Italy and Switzerland. The principal characteristics of the region’s geography are, as its name suggests, the river Rhône and the Alps mountains.

The very broad Rhône valley is an agricultural region and a renowned area for wines : the Beaujolais nouveau, in particular, is very popular. Unlike most other wines, it is fermented only a few weeks before being released for sale, which happens on the third Thursday of November and is used as an excuse to organize festivities all around France.

The eastern part of the region is shaped by the Alps, the highest mountain range in Europe. Its highest peak, Mont Blanc, rises up to 4,808 meters above sea level and is a very popular spot for hiking and skiing. Chamonix, one of the oldest and most famous ski-station located near the peak, hosted the first Winter Olympic games, in 1924. The Mont Blanc tunnel which runs beneath the mountain connects France to Italy.

A little bit of History

The Rhône valley has always been a major route of communication, which explains why the oldest rupestrian paintings in the world have been discovered in this region, in the Chauvet Cave. Cities built on this very important axis then took advantage of this location to develop commercial exchanges. For example, Lyon was already an important city during the Gallo-Roman era.

Over the centuries, the city of Lyon, which is now the official capital of the region, continued its expansion, despite the religious wars between Protestants and Catholics, which were particularly violent there. During the 19th century, the city was a renowned place in the spinning sector, producing a lot of textiles, and silk fabrics. The city developed its automobile and chemical sectors during the Industrial Revolution. During World War II, it was an important place for the French Resistance fighting in the free zone against the Nazis invaders. Today, Lyon is a great european metropolis and a leader in several innovative fields, as well as a center for research and education.

The Alps have a slightly different history, in particular the old region of Savoie (Savoye), in the northern part of the mountain range, which became part of France in 1860. It is today a very touristic destination. Grenoble, which is one of the largest cities in the Alps, grew in size during the Industrial Revolution because of its hydroelectric capacities. It is now specialized in nanotechnologies.

Lyon metropolitan area, which counts more than 2,2 millions residents, is the second largest area in France after Paris.

Vieux Lyon (“Old Town”), built in the 16th century, has been preserved, and is now a major touristic attraction and wonderful for walks and bike rides. It is divided in districts referring to Christian saints, each one hosting a Catholic church. Its little paved and carefree streets are worth following, because of the beauty of some of the building facades and of their historic importance. La place du Change (“Exchange Square”), for example, is a symbol of the time when the old town was the business center of the city, and Lyon was a rich and powerful merchant city.

The construction of the Catholic Basilica of Fourvière started in 1872, following Architect Pierre Brossan’s drawings, which very unusually mixed both Romanesque and Byzantine architecture. Built on top of a hill, it can be seen from most part of the city and is therefore a landmark for the residents of Lyon, as well as a place for them to go see the city as a whole. It is now part of a UNESCO World Heritage site. Fourvière is dedicated to the Virgin Mary, to whom is attributed the salvation of the city of Lyon from the bubonic plague, the Black Death, that swept Europe in 1643. 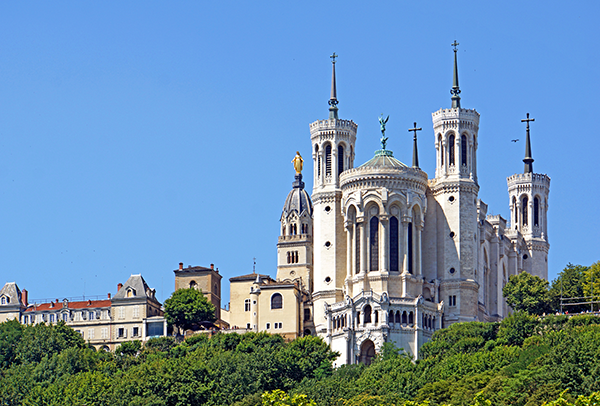 Parc de la Tête d’Or ("Park of the Golden Head”) is a 290 acres parc featuring a lake, a zoo and sports facilities, as well as a botanical garden and four roses gardens. In the middle of the lake, there is an island on which is erected a soldiers memorial. It is a very popular place for families and joggers.

Lyon has a long culinary art tradition and is often referred to as the “Gastronomic Capital of the World”. Renowned chefs developed lyonnaise cuisine into a national phenomenon favored by the French elite; a tradition which 3-star Michelin chef, Paul Bocuse, later turned into a worldwide success.

Each year, on December 8, the Fête des lumières (“Festival of Lights”) happens. It is a celebration of thanks to the Virgin Mary, who purportedly saved the city from the deadly plague of the Middle Ages. During the event, the inhabitants place candles at their windows and the city of Lyon organizes impressive large-scale light shows onto the sides of important Lyonnais monuments, such as the medieval Cathédrale St-Jean. 3 million people come each year to enjoy this friendly and festive atmosphere and watch the light shows while enjoying a glass of mulled wine! 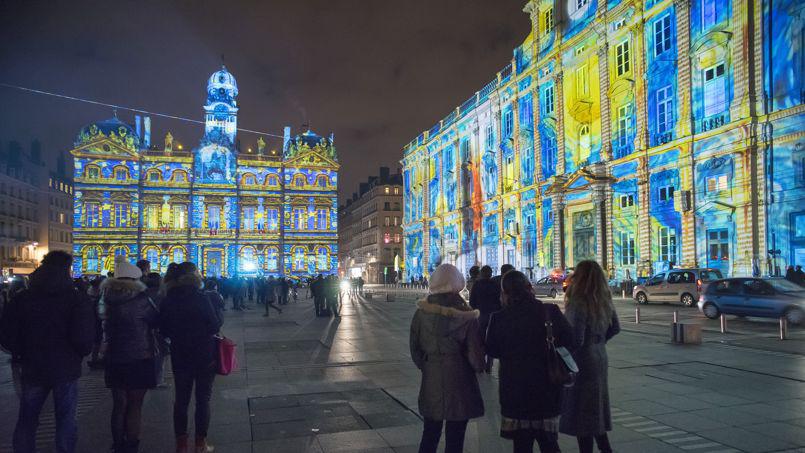 Located 50km southwest of Lyon, Saint-Etienne is an industrial city where coal mines where operated during the 19th century. It is now an important city for education, gathering different engineering schools such as École Nationale Supérieure des Mines or Telecom Saint Etienne. The city is now engaged in urban renewal and aims to become a center for design. Since 2010, it is part of the Unesco’s Creative Cities Network.

Grenoble was specialized in the glove making industry in the 18th and 19th century. It then developed a strong hydropower industry. Is is now a significant scientific center in Europe and a place for winter sports. In 1968, Grenoble hosted the 10th Olympic Winter Games. The city is famous for many nearby ski resorts nestled in the surrounding mountains. The Tour de France cycling race also regularly passes through the city. 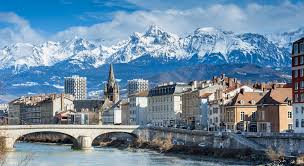 A place for cultural and scientific innovation

Lyon played a significant role in the history of cinema: this is where brothers Auguste and Louis Lumière invented the cinematographe, in 1895. The Institut Lumière, built as Auguste Lumiere’s house, holds many of their first inventions and other early cinematic and photographic artifacts. The city of Lyon also organizes in alternate years two major events for contemporary art: a large contemporary art fair (“Biennale d’art contemporain”), in different locations; and a contemporary danse festival (“Biennale de la danse”), aiming at making danse more accessible to a broader public. In 2014, a new museum for sciences and anthropology (“Musée des Confluences”) opened in Lyon in a strange and beautiful building. Dealing with the questions "Where do we come from?”, "Who are we?" and "What do we do?”, it adresses various questions like the representation of death in different cultures, the relationship between men and the biodiversity or the mechanism of evolution, using an innovative museography.

Economically, Lyon is a major center for the chemical, pharmaceutical, and biotech industries. The city contains a significant software industry with a particular focus on video games, and in recent years has fostered a growing local start-up sector. Lyon was ranked 19th globally and second in France for innovation in 2014.

Grenoble is a major scientific centre, especially in the fields of physics, computer science, and applied mathematics. The Grenoble Institute of Technology trains more than 5,000 engineers every year in key technology disciplines. Grenoble’s high tech expertise is organized mainly around three domains: information technology, biotechnologies and new technologies of energy. Grenoble is also one of the co-location centres of the European Institute of Innovation, of the Technology’s Knowledge and Innovation Communities for sustainable energy, and of the French Alternative Energies and Atomic Energy Commission ("Commissariat à l’énergie atomique et aux énergies alternatives"). The city benefits from the highest concentration of strategic jobs in France after Paris, with 14% of the employments, 35,186 jobs, 45% of which specialized in design and research. Forbes ranked Grenoble 5th on its World’s Most Inventive Cities ranking. 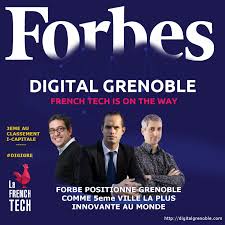