Welcome to the "French Corner", the Consulate’s monthly rendez-vous dedicated to the promotion of France’s culture and patrimony, in video! This month discover our recipe from Auvergne: "Coq au Vin de Chanturgue".

Auvergne and Food: A Love Affair

French Corner is back, and this month we are taking you to the historical region of Auvergne! Auvergne culinary traditions today extend mainly over the French departments of Cantal, Puy-de-Dôme, Allier and Haute-Loire. Throughout the past centuries, classical French specialties both grandiose in taste and quite substantial in quantity, have been consistently prepared and eaten with delight in this majestic and volcanic region – which, as you can guess, also happens to be one of the oldest bastion of cuisine du terroir. Just naming these courses suffices to feel a sweet and pleasant dizziness engulf you with relishing savors. Just think of Aligot, Truffade, Chou Farci (stuffed cabbage), Pachade (an Auvergnat kind of crêpe), Tripoux (aka Pansette de Gerzat, veal and lamb tripe cooked in white wine, a true wonder!), le Puy Green Lentil, Blue, Cantal & Salers cheese, Potée Auvergnate, Patranque (fresh bread and fresh Cantal "tome"), Pompe aux Grattons (delicious bread stuffed with Ciccioli), Vic or Paulhac Pie.

Today, we have decided to get off the beaten track, and to offer you the recipe of a lesser known specialty, or at least of a delicacy which does not usually come to mind when thinking about Auvergne, but which still has become an absolute classic of French food – thanks to its multiples variations and adjustments in different French regions — and which remains one of the oldest, most delicious and revered meals of the region. Maybe some of you have already guessed... I have of course been referring all along the way to Coq au Vin de Chanturgue. This course is a mythical one for many Auvergnats. Of course, as you may know, Frenchmen from many regions across the country, from Alsace, Bourgogne or Champagne, have been battling for years to prove that they are the only righteous ones claiming the birthright of Coq au Vin. But the people of Auvergne, with their Coq au Vin de Chanturgue, have quite a story going for them, which goes back centuries. According to some kind of myth, or oral tradition, whatever it may be, the Coq au Vin recipe originates in the legendary encounter between Julius Caesar himself and the wine of Chanturgue. At the time of the Roman Gallic Wars, the chief of an Arverni tribe would have sent a rooster – the Gauls’ symbol for bravery – to the then Roman Consul in a derisive gesture designed to provoke their assailant. Caesar would have returned the favor by inviting him at a cena, during which the brave rooster would have been served braised in local wine…

Chanturgue is one of the oldest and most famous of the crus of the Côtes-d’Auvergne. It is a red wine made out of gamay grapes in one of the smallest vineyard of the region – only 15 ac – located near Clermont-Ferrand. It is arguably one of the most exquisite wines of the region and a well-liked wine in France. Few people still remember it but before the phyllorexa plague of the last third of the 19th century, the vineyards of Auvergne were considered some of the best in the country, just behind those of Bourgogne and Bordeaux. King Henry IV and Louis XIV of France were indeed avid drinkers of Chanturgue wine. 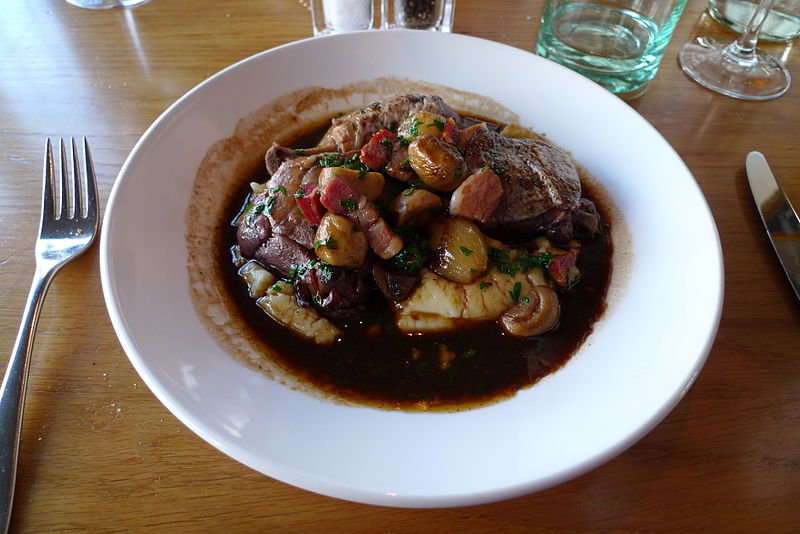 7 ounces of good bacon or pancetta

Cut the chicken or rooster in 8ths, and put the pieces in a pot

Put both the sliced onion and the carrot pieces in the pot, and add to it the bouquet garni and peppercorns.

Add the wine, cover the pot with a tight fitting lid and place in the refrigerator for at least 24 hours

On the next day, drip-dry the chicken pieces, and sieve the marinade

Heat the olive oil in a large frying pan, add brown the chicken pieces in batches in a single layer for about 5 minutes, turning to brown evenly

Add the chicken pieces, vegetables and the cloves of garlic that you will have previously grinded to a large Dutch oven

Heat up the marinade, pour it into the Dutch oven and bring it to the boil

Peel the small onions and the mushrooms

When the 2 hours of stewing are almost done, add the garniture to the Dutck oven

Adjust the seasoning and scatter the course with minced parsley