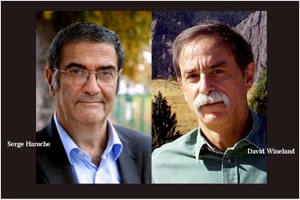 In an announcement on Tuesday, October 9, French scientist Serge Haroche and his American counterpart David Wineland were named this year’s winners of the Nobel Prize in Physics by the Royal Swedish Academy of Sciences.

Mr. Wineland and Mr. Haroche, both 68, are being honored for their work in “quantum optics,” a field that explores the use of basic units of light and matter.

Mr. Haroche, from France’s prestigious École Normale Superieure, and David Wineland, of the National Institute of Standards and Technology in Boulder, Colorado, have been awarded the distinction for “ground-breaking experimental methods” that lead to the development of laser-cooled atomic clocks, quantum computers, and event encryption decoders.

Scientists project that Mr. Haroche and Mr. Wineland’s work could lead to significant advancements in communication and computation.

“[These] Nobel laureates have opened the door to a new era of experimentation with quantum physics,” said the Royal Swedish Academy of Sciences. Quantum physics uses advanced mathematics to understand the strange behavior of tiny particles that serve as the “building blocks” of the universe. Mr. Haroche and Mr. Wineland’s work may pave the way for “quantum computers” capable of complex operations to further study in the field.

Mr. Haroche (right) with a research assistant in his Paris laboratory in 2009. Copyright ? Photothèque/Christophe Lebedinsky

As reported by Reuters, when asked how he plans to celebrate, Mr. Haroche replied, “I will have champagne, of course.” The two scientists will share the $1.2 million prize.

In a statement, French President François Hollande lauded Mr. Haroche’s lifetime of work in France’s leading scientific universities and institutions. The head of state called the award a "point of pride for our country" and a "huge satisfaction for all of the French research community."