On July 13th, 2017, the Consul General of France, Valéry Freland, and Mr. Laurent Colomines invited guests from the local community to a Bastille Day celebration at their residence in Cambridge.

On July 13, 2017, 250 guests gathered at the Residence of France to celebrate the Franco-American friendship on Bastille Day.

The Consulate General of France organized the evening around the fight against climate change and the commitments towards a sustainable world. #1Planet1Plan 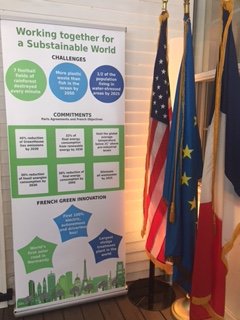 Therefor the green color was everywhere! 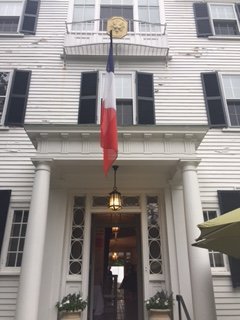 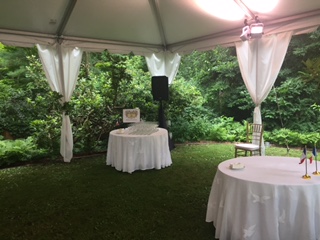 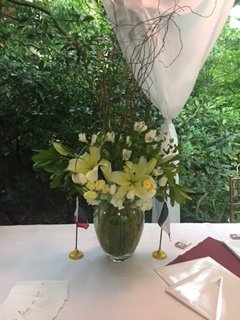 Even the flyers were green so that guests could enjoy a French cuisine tour of the premises. 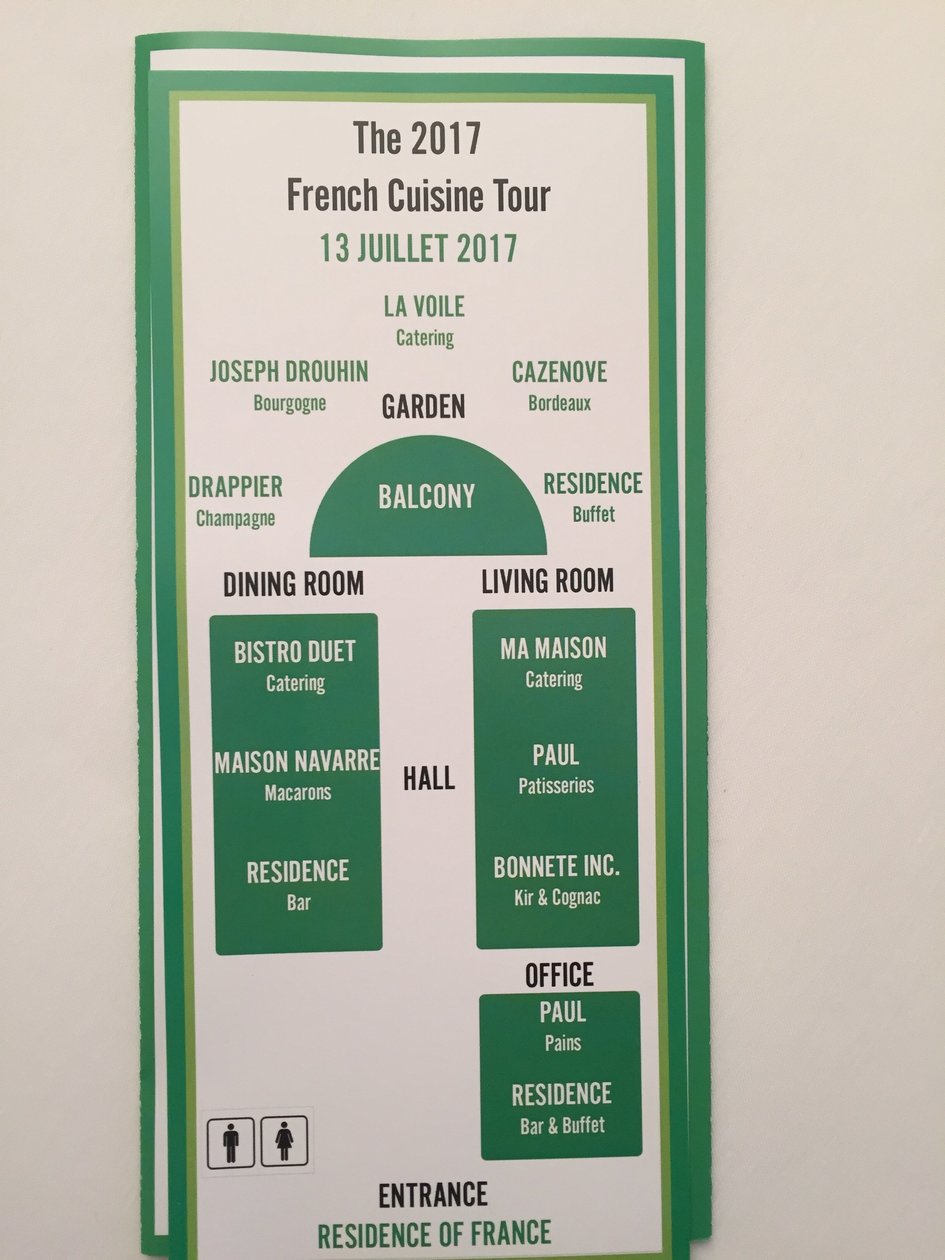 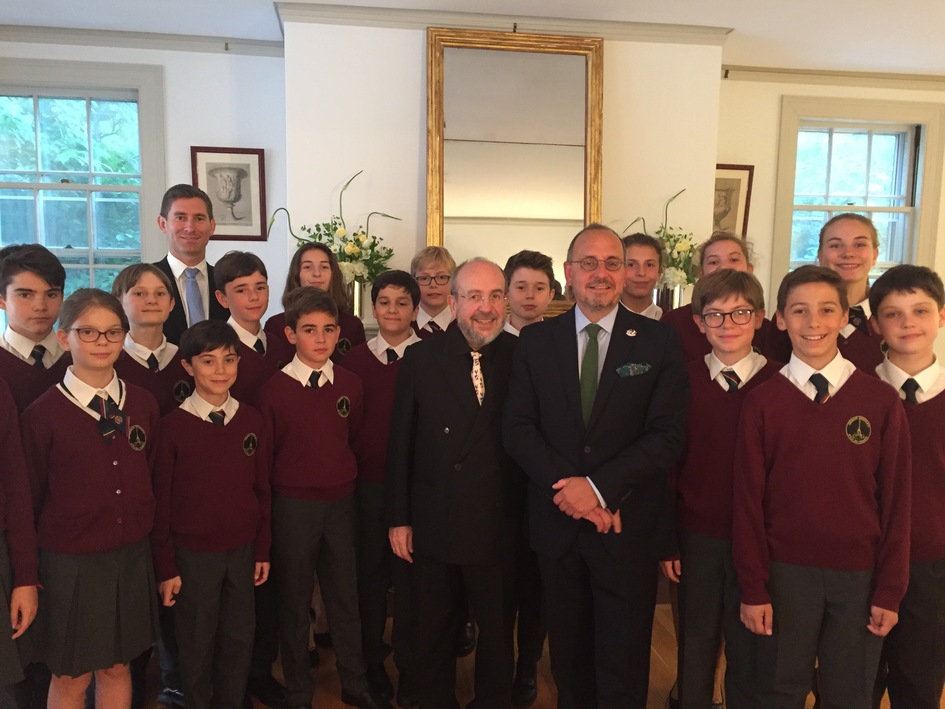 Thanks to nine incredible vendors, the evening was a success!

The Consulate General of France in Boston would like to reiterate its most sincere thanks to all its donors and sponsors whithout whom it would not be able to carry out all its actions throughout the year. 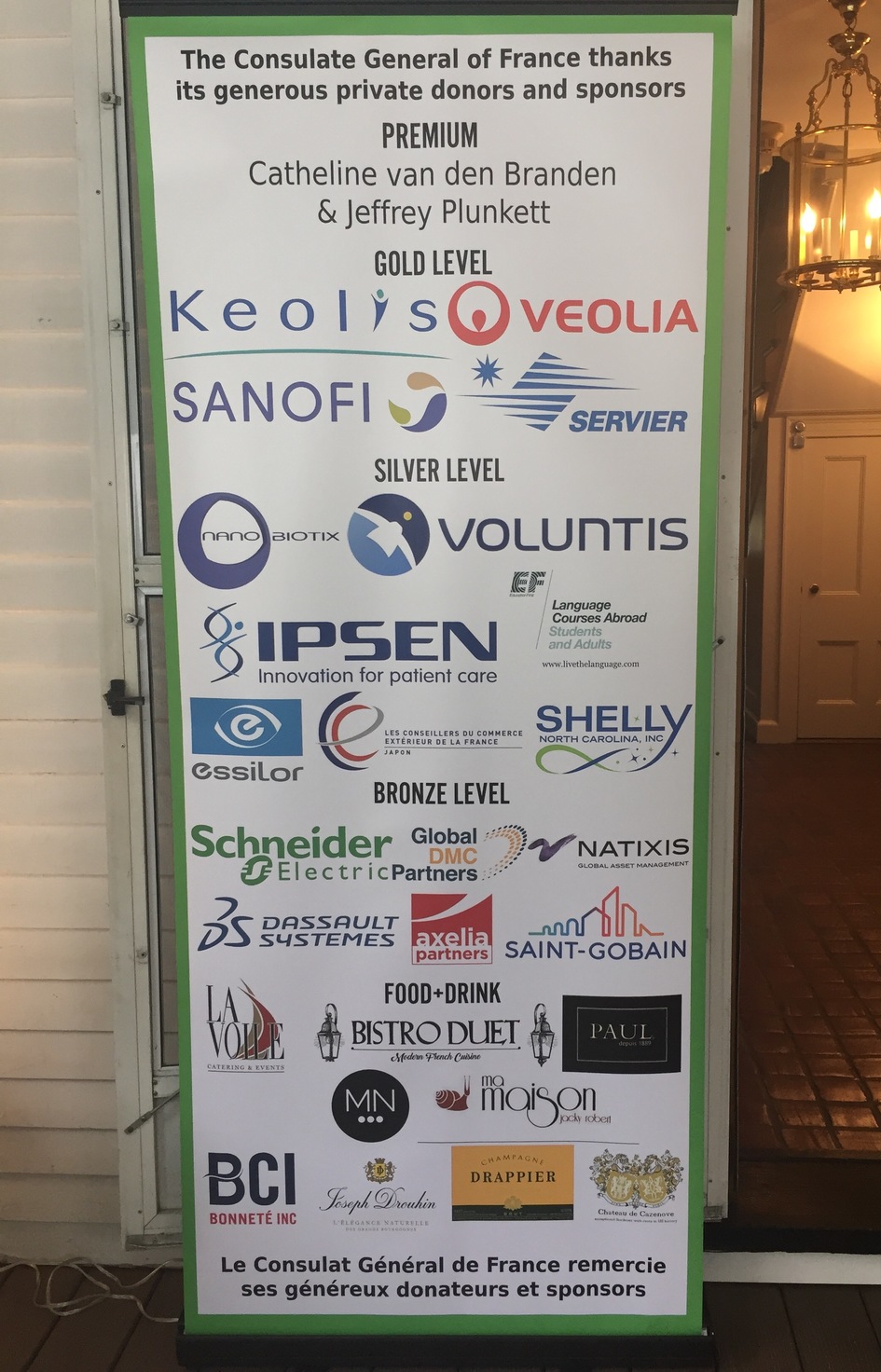 Here is a copy of the speech Consul General, Valéry Freland, gave for the occasion:

Before I make the traditional Bastille Day speech, let me give the floor to the representatives of Governor Baker, who couldn’t make it tonight, our dear friends Secretary of Veterans’ Services Francisco Ure?a and Assistant Secretary of Business Development Nam Pham. Thank you for being with us tonight.

Some of you must wonder why we organized it on July 13th?! It is not because we are planning to start a new Revolution -a calendar Revolution- but because I will be in Providence Rhode Island tomorrow evening to decorate three World War II American veterans –just as we did last year right here.

1- A year ago, our Bastille Day was sadly bereaved by the terror attacks in Nice. Once again, barbarism had struck France, as it did in many other countries over the last few years. Tonight, my first thoughts go out to the victims of this tragic event. We stand along with their families and we will never forget them, as all those who, all over the world, in Paris, Nice, Boston, or Orlando, have been the victims of terrorism.

Because we wanted to pay tribute to them, I’m much honored to welcome tonight three representatives of a New England association –One World Strong- which aims to establish a resilient international community united in the support and mentorship of any person impacted by terror attacks. I thank them for being with us tonight, and for their extraordinary work, including their action towards the survivors of the Nice attack.

2- Beyond the current uncertainties in the world, what this solidarity reminds us of is the strength of the French-American friendship, based on common values. And at a time where these universal values are being attacked, I do believe that it is very important to show how strong the bonds between our two countries are. France and the US have been friends for more than 240 years!

As you know, General Lafayette is a prominent figure of this friendship, and of the American Revolution. That’s the reason why this Consulate decided to work on a very original historical and touristic project: the creation of a Lafayette Trail, all over New England, based on the very successful Farewell Tour made by the ci-devant Marquis in 1824 and 1825. Thanks to our intern Julien Icher, a mobile application was launched which will help Lafayette’s fans to discover both a great page of our bilateral history, and some wonderful landscapes of New England. Julien Icher is at your disposal to show you, in the living room, this mobile app.

The entrance of the United States into the First World War, which we commemorate the hundredth anniversary this year, is another symbol of our friendship. April 1917 marked a major shift in our common history, as in the world. Tonight, I want to salute more particularly Bostonians and New Englanders who joined the side of freedom and democracy, including the volunteers who founded the “Escadrille Lafayette” –Lafayette, again- in 1916.

To commemorate this centennial, President Trump, at the invitation of President Macron, will attend Bastille Day celebrations in Paris tomorrow. The friendship between our two countries, between the US and Europe, beyond some different views on some topics, is a major element of stability and peace for the world.

3- Since last year, many things have happened in the world, including in the US and in France, as I’m sure you’ve noticed. With the recent election of President Macron, France is writing a new page of its thousand-year-old history, a page of reforms. Indeed, President Macron plans to radically simplify French labor laws, to importantly reduce corporate taxes and public expenditures, to develop the French knowledge-based economy, and also to make the European Union more efficient. A wind of hope has risen in France, and also in Europe, where the expectations are very high. I can assure you that with my European colleagues in Boston –whom I warmly welcome- we make this European spirit very lively!

It is this France, reconciled with hope and self-confidence, that we want to show you tonight, a France looking towards the future, creative and innovative, more and more welcoming to international investments, and a probable host of the Olympic Games. A green France which wants to fight against climate change with all its partners: as President Macron recently announced, Paris will host a new international summit on climate change on December 12th. A France which wants to be at the forefront of the green economy! Challenges are enormous –as you can see on the poster behind me- but we know that we can rely on many American states and cities from New England, member of the United States Climate Alliance. Thank you to our New Englander friends!

4- This ambitious and determined France is the one you find here in Boston within the dynamic French community who gave President Macron one of its best scores worldwide: 96% of the voters. By the way, I’d like to congratulate my compatriots for the high turnout at the presidential election, and also for their patience while they were queuing to go vote… I also thank my team and the hundreds of volunteers who helped us to make this civic event a success.

To my compatriots, I also want to say that one of the very first ambitions of the French Consulate is to provide them with the best services –and we can be satisfied with the progress of digital administration- to support their initiatives –especially in the economic sector-, and to assure their security. To that extent, I want to thank the police departments for their dedication to our security. Merci beaucoup !

5- This forward-looking France, your France, is the France we want to embody at the French Consulate in Boston. In this regard, with my team, we are involved in many concrete projects, with the strong support of our business community. For instance, in order to strengthen our academic ties, we will organize an International Symposium on “Education for Gender Equality” at Wellesley College on October 20th and 21st, which will be open by French Minister for Gender Equality Marlène Schiappa. Moreover, as France wants to become a “startup Nation” as President Macron said -one example being the opening of the world’s biggest incubator Station F in Paris- here, in Boston, we are helping French startups to approach the American market with the NETVA program, and helping American startups to settle their business in France with the Yei Start in France program. We also work with many American partners to promote the teaching of French in New England through our support to the creation of bilingual or after school programs.

6- An now, it’s time for the most important part of an official Bastille Day speech: thanking our generous sponsors! As you can see on our poster, there are more and more private donors and companies, French or American, which support our action dedicated to the strengthening of the French-American friendship in New England. So, let me take a deep breath before I thank: our friends Catheline van den Branden and Jeffrey Plunkett; Sanofi, Keolis, Veolia and Servier ; the remarkable network of the Conseillers du Commerce extérieur et leur Présidente, Isabelle Estebe, Ipsen, Nanobiotix, Voluntis, Essilor, Shelly and Education First; Schneider Electric, Saint-Gobain, Dassault Systèmes, Axelia Partners, and Global DMC Partners. A huge thank you to all of you!

I also want to thank all the actors of the French Gastronomy in New England who are with us tonight and which will make this day unforgettable for our palate, and also maybe for our diet: restaurants La Voile, Bistro Duet and Ma Maison; bakeries Paul and Maison Navarre; Champagne Drappier; Bourgogne Joseph Drouhin; Bordeaux Chateau de Cazenove; and Cognac and Cassis de Dijon BCI Bonneté.

Last but not least, I want to thank the amazing work of the team of the Residence of France –Chef Etienne Jaulin and Marinossa-, the Consulate –Fadila, Judith, Emmanuelle, Laura, Jacques and Juliet -, and Laurent without whom this Residence would not be what it is.

I raise my glass –of Champagne- to the French-American friendship, and I hope to see you again tomorrow at the prestigious Bastille Day of the French Cultural Center, which will welcome the talented French Singer Ben l’Oncle Soul, or at the French Film Festival at the MFA in the coming days.

Happy Bastille Day to all!!” 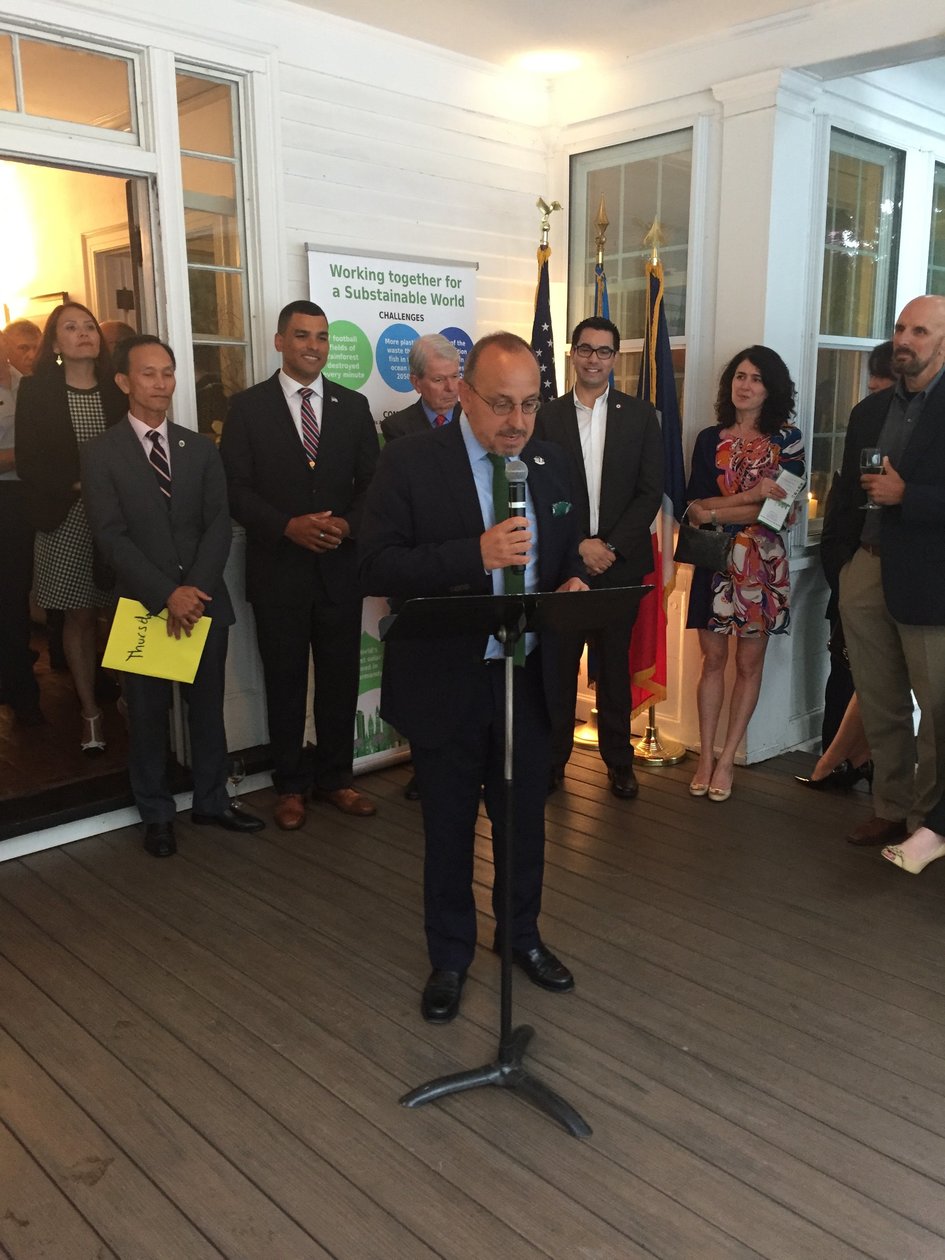 Please enjoy a few pictures with our guests: 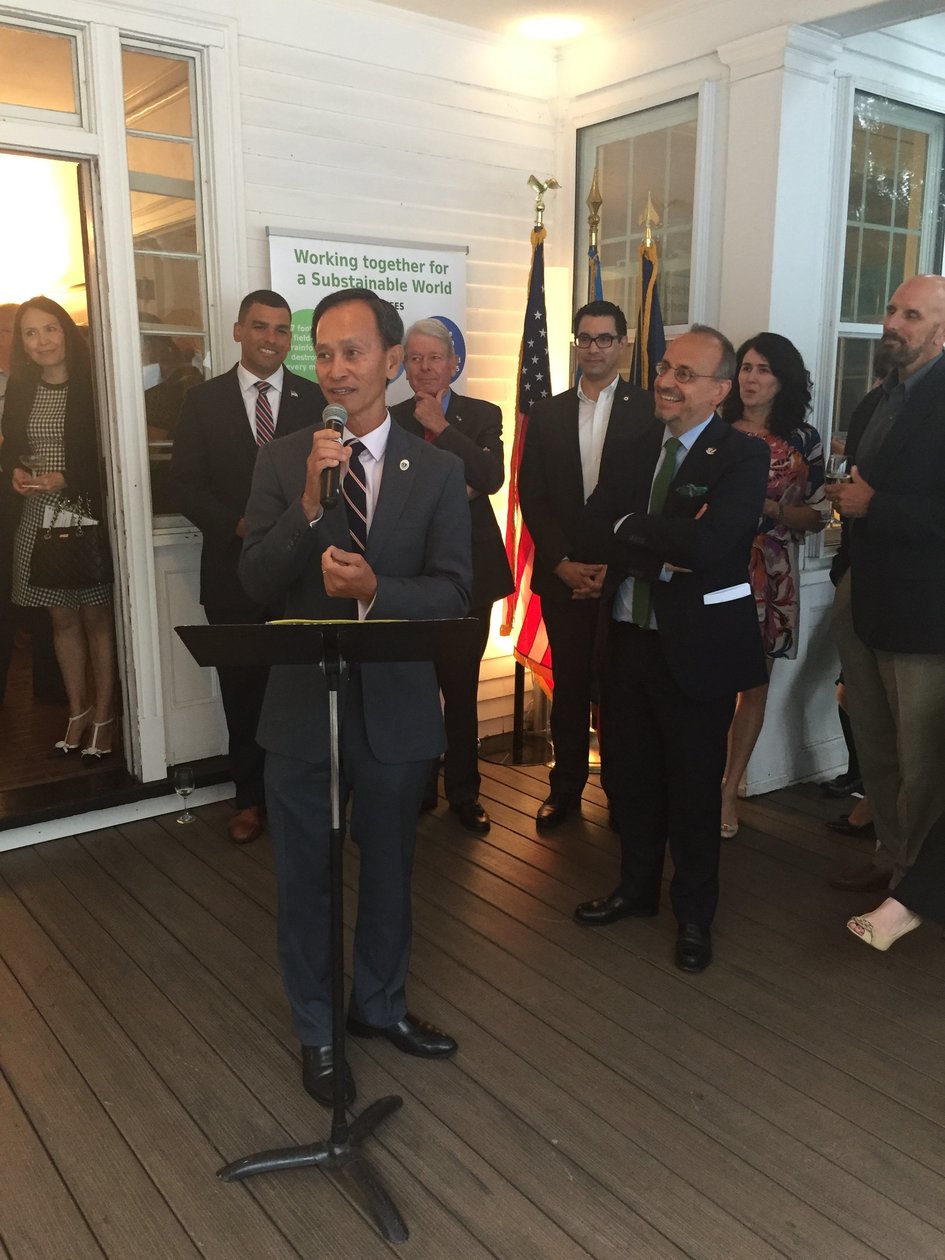 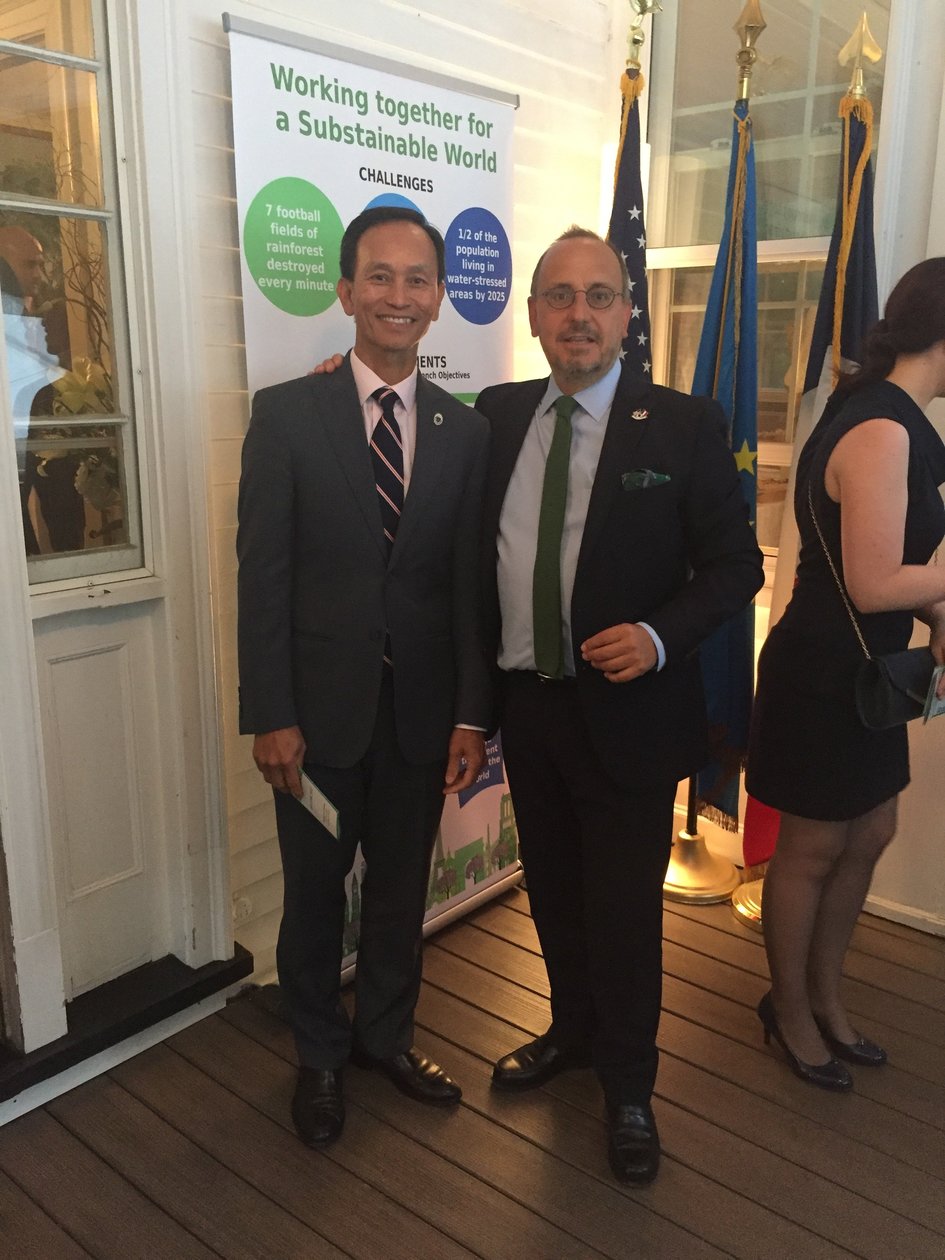 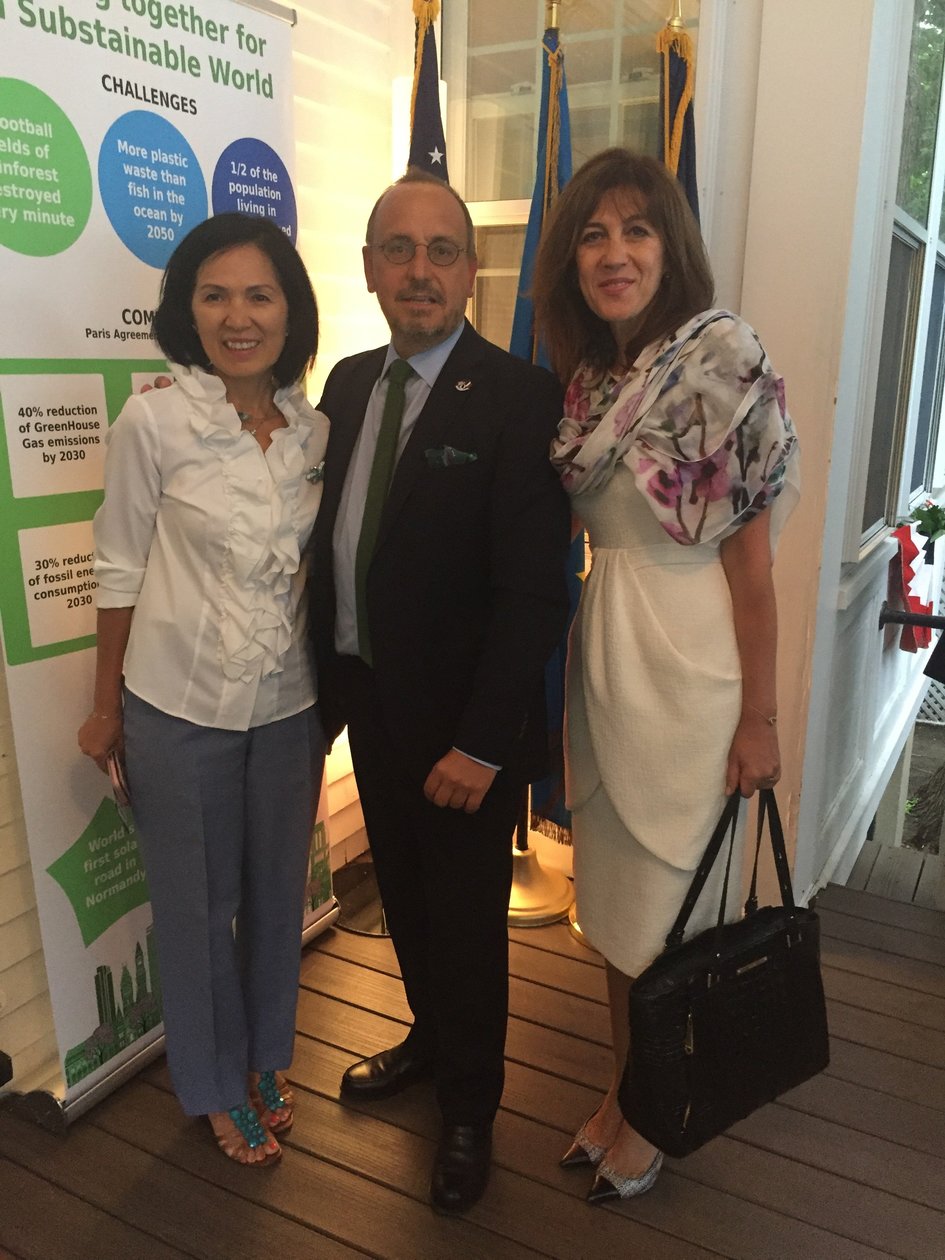 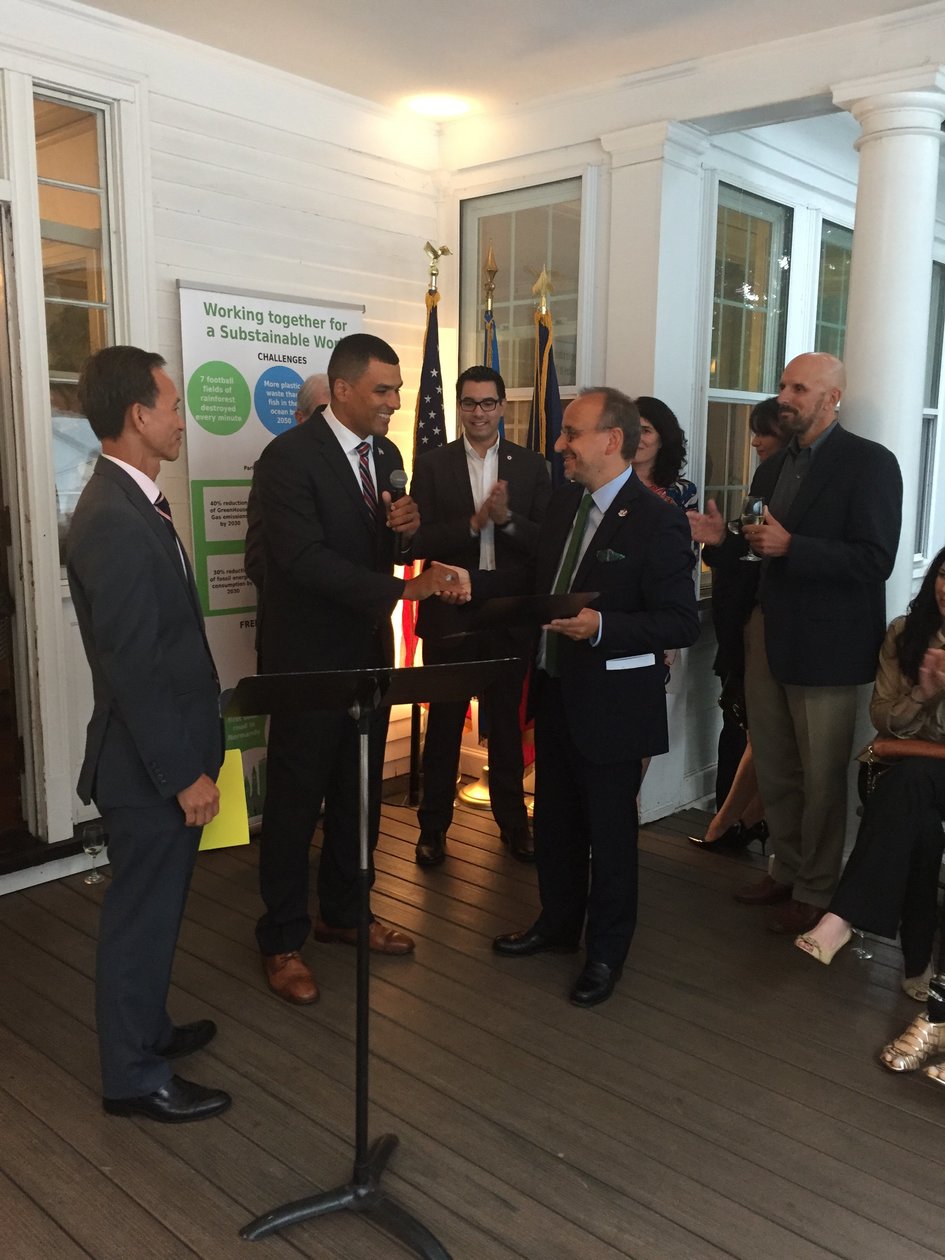 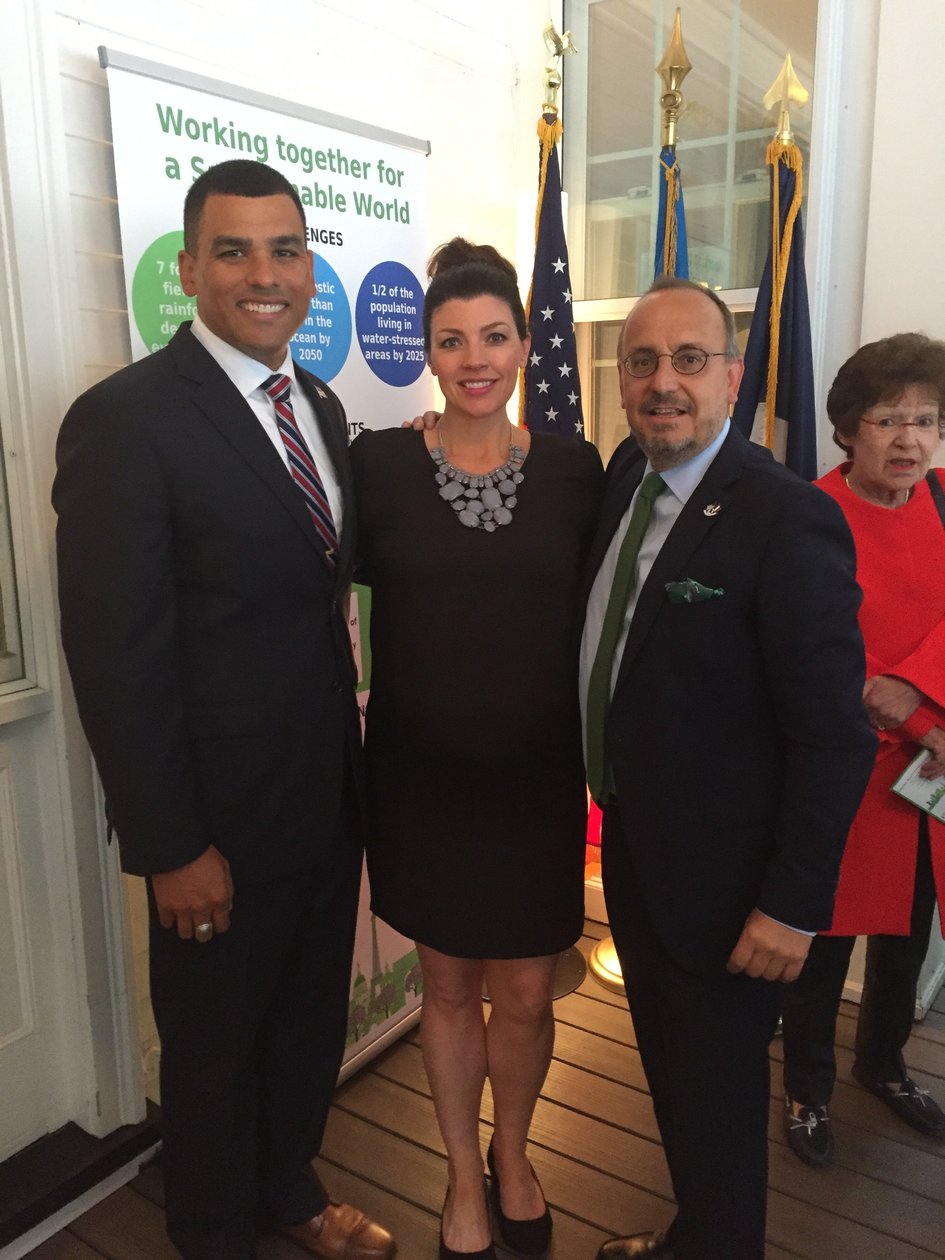 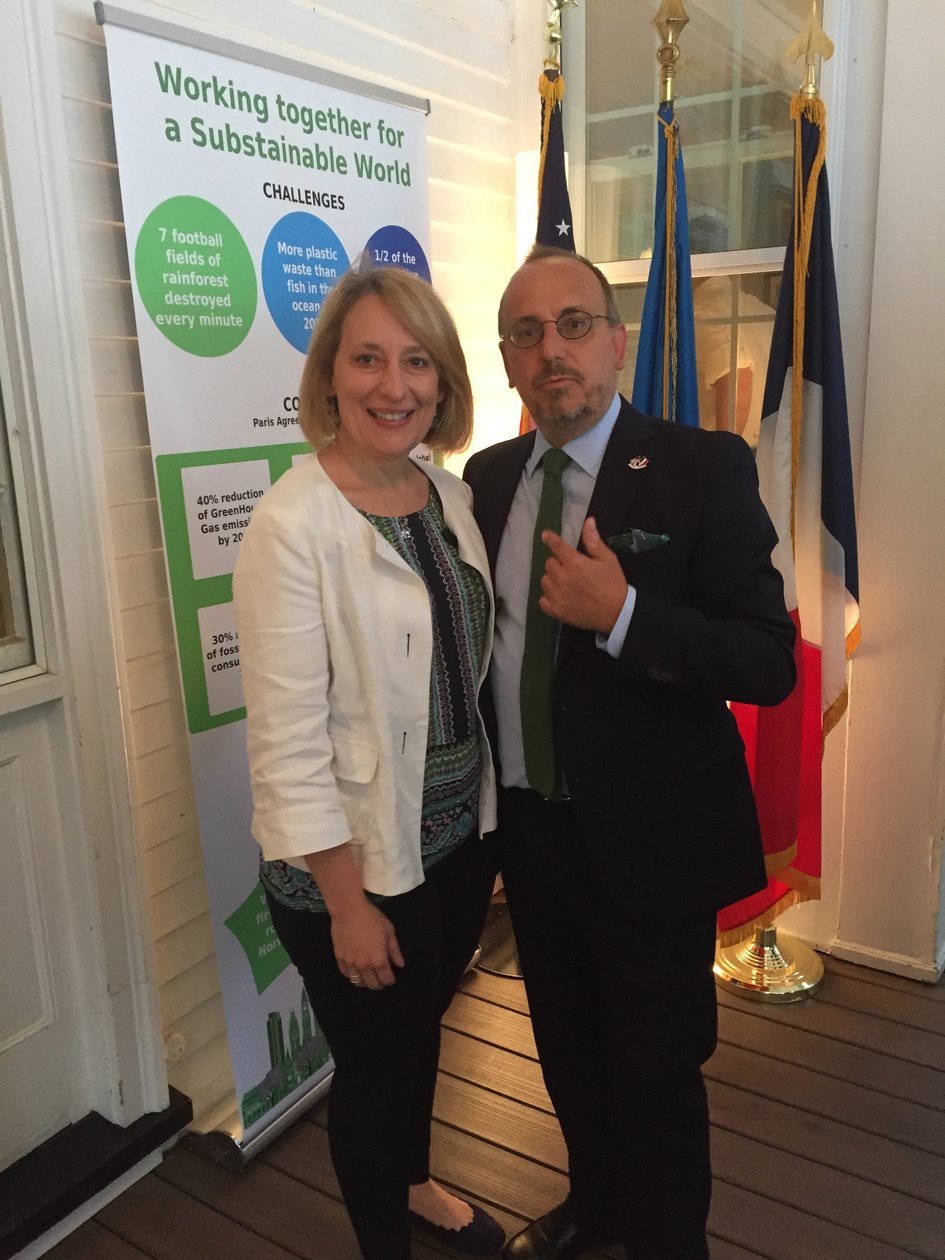 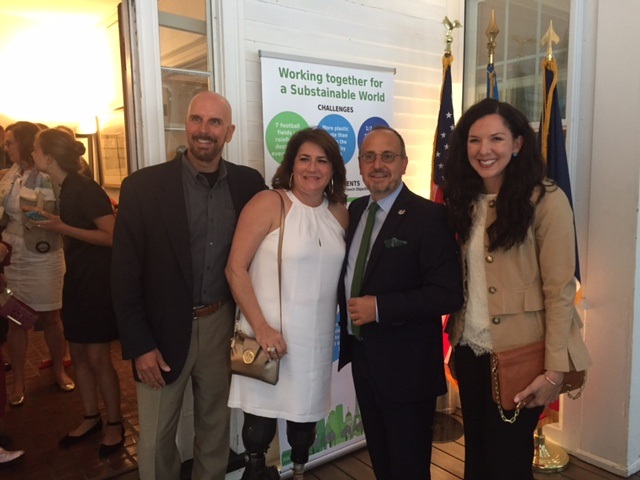 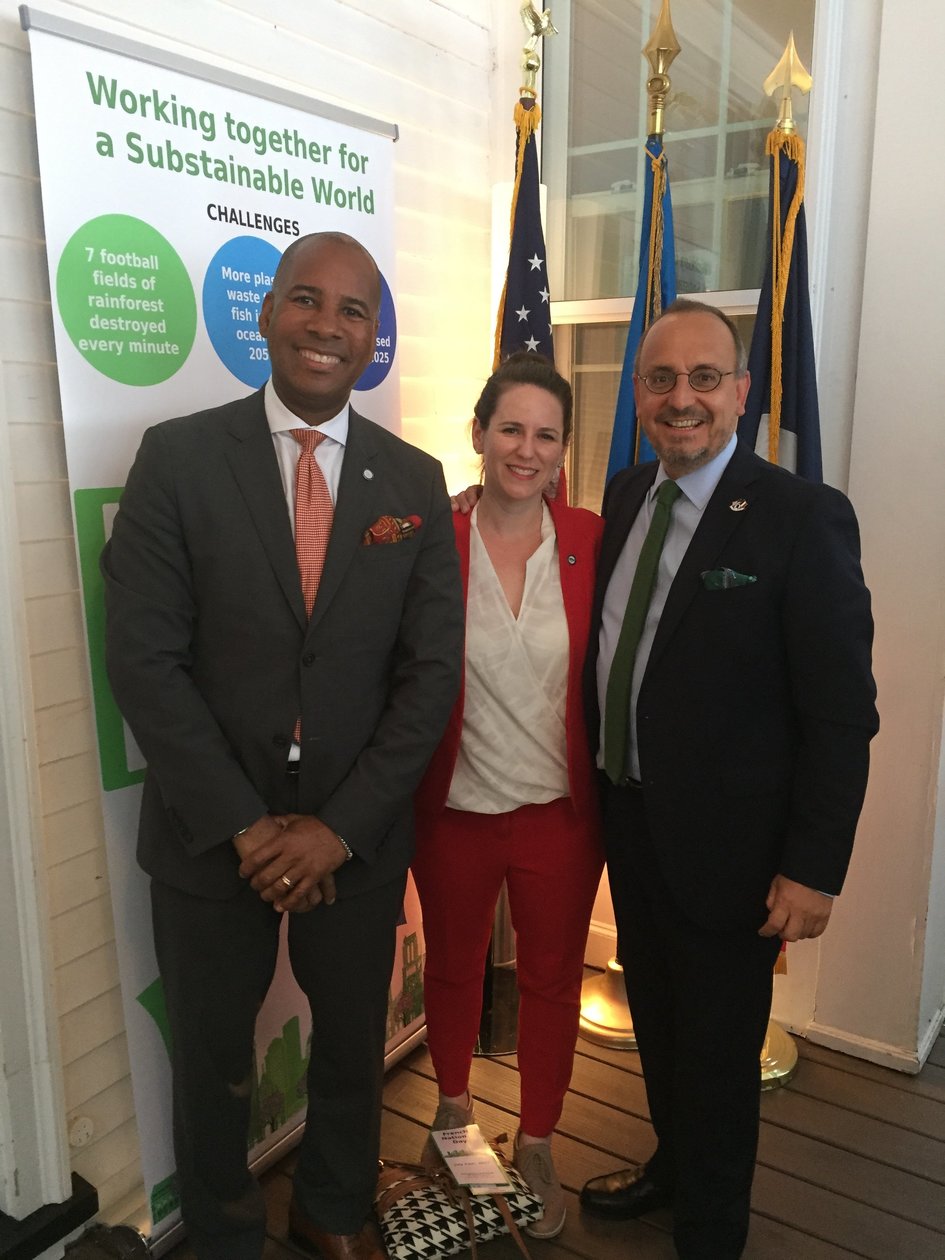 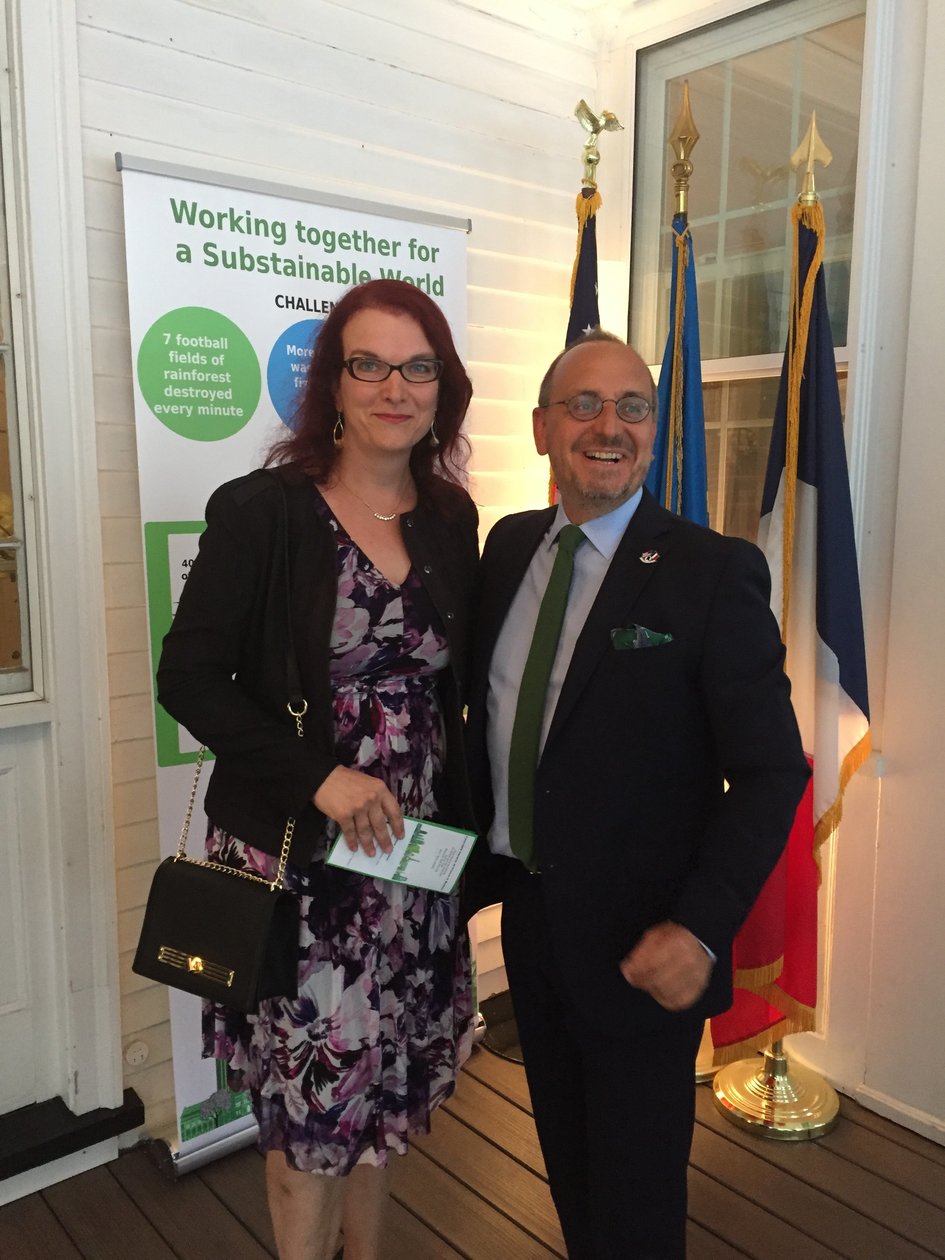 International School of Boston Former President of the Board, Mrs. Beth Ann Dahan: 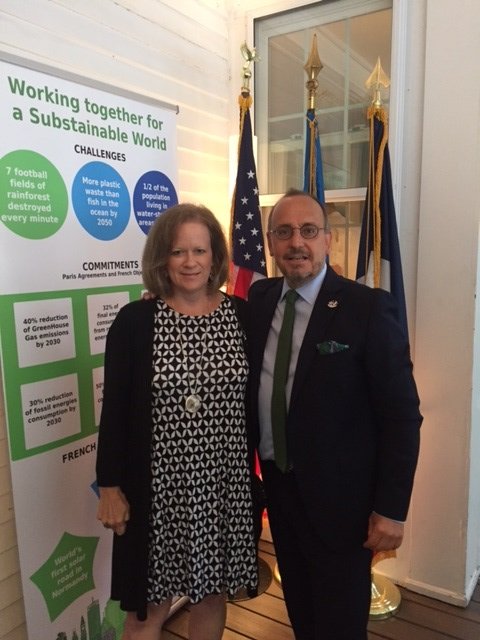 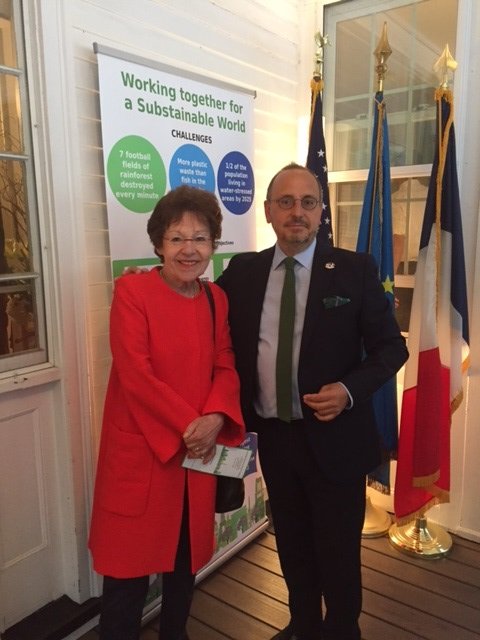 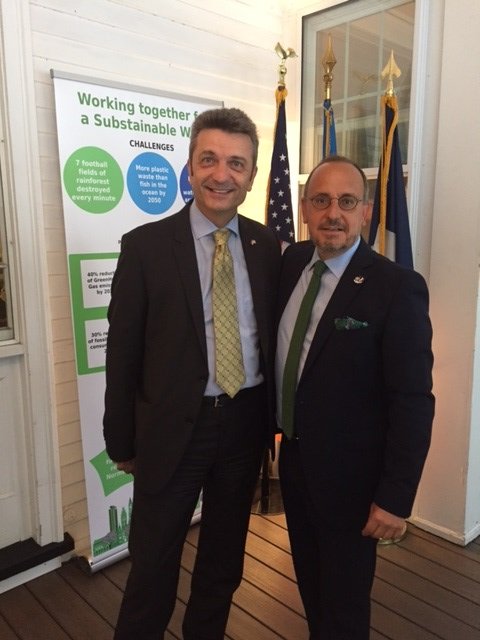 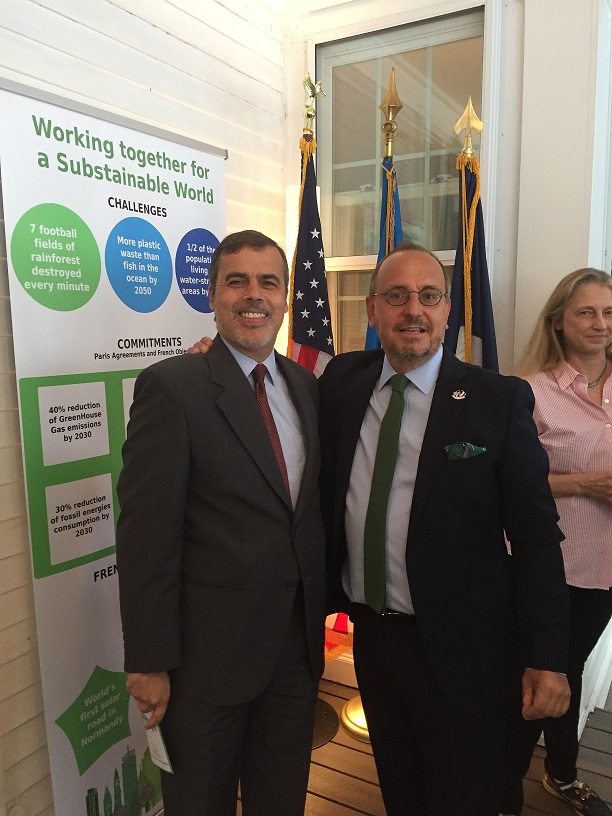 Consul General of Haïti in Boston: Mrs. Marjorie A. Brunache: 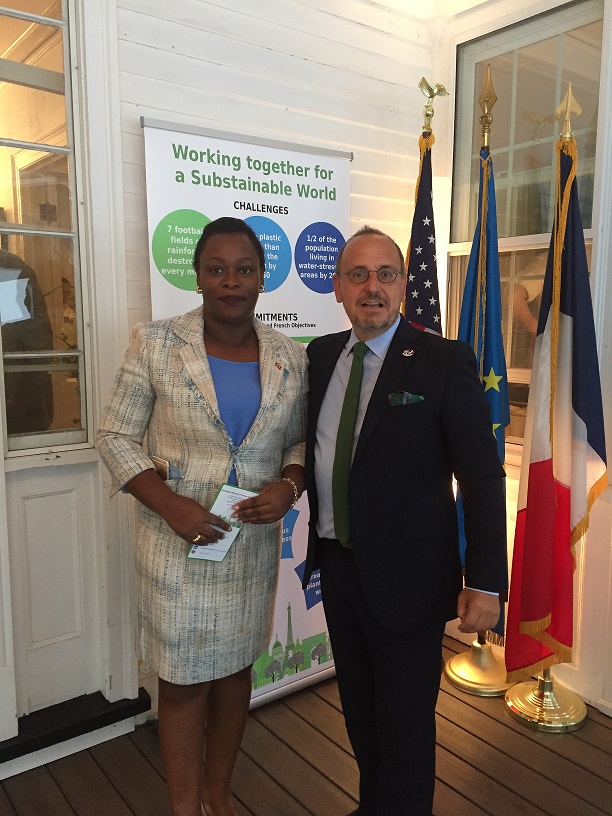 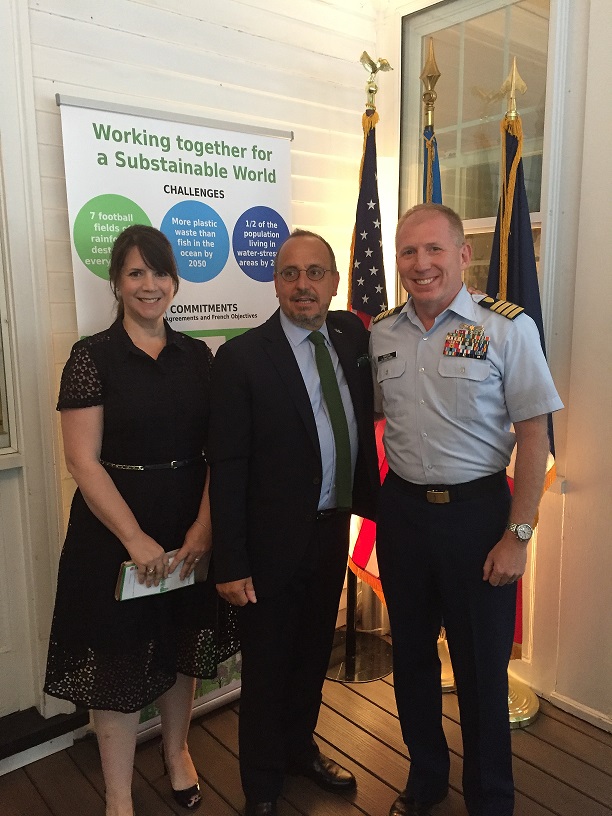 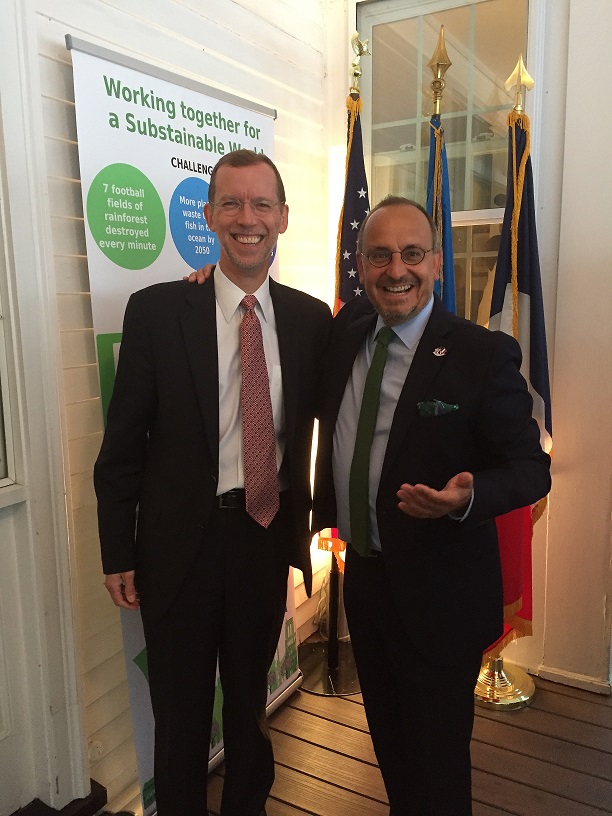 HAPPY BASTILLE DAY TO ALL!!