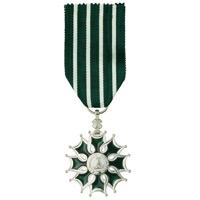 On April 4th, 2012, the Consul General, Mr. Christophe Guilhou, honored Mr. Paul Bessire, the Deputy Director for External Relations of the Institute of Contemporary Art in Boston, for a life greatly dedicated to French culture and its diversity. Mr. Bessire received the insignia of Chevalier of the Order of Arts and Letters . 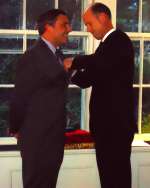 The Consul General, Mr. Christophe Guilhou, bestowed the insignia of Chevalier of the Order of Arts and Letters to Mr. Paul Bessire

Fluent in French, Mr. Bessire spent 1983-1984 studying French cuisine and working in a two-star Michelin restaurant and has been an ardent Francophile ever since.

Since joining the ICA in 2000, Mr. Bessire has played a leadership role in repositioning the ICA locally and nationally. Mr. Bessire was instrumental in raising the $60 million necessary for the ICA’s new museum building on the Boston waterfront.

In addition to his professional achievements, and in collaboration with his fellow curators and the French Consulate, Mr. Bessire has consistently promoted French contemporary artists, most notably: the work of Kader Attia, Chantal Akerman, Philippe Parreno, Rachid Ouramdane, Xavier Leroy and more recently Cédric Andrieux. 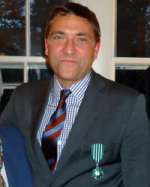 Mr. Paul Bessire, Chevalier of the Order of Arts and Letters

L’Ordre des Arts et des Lettres (the Order of Arts and Letters) is among the most prestigious of French decorations and recognizes eminent artists, curators, art professionals and other greats who have contributed significantly to furthering the arts in France and throughout the world. Americans who have received the award include: Paul Auster, Jim Jarmusch, Richard Meier, Robert Paxton, Robert Redford, Meryl Streep and Uma Thurman.