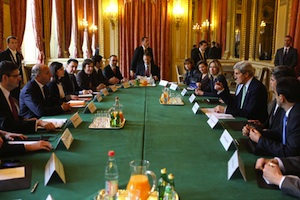 February 27, 2013 - On John Kerry’s first visit to France since his appointment as Secretary of State, he met with Mr. Laurent Fabius, French Minister of Foreign Affairs, to discuss Franco-American relations as well as a wide range of major international issues.

Mr. Fabius and his American counterpart discussed the situation in Mali, on which they are cooperating very closely. In addition, they talked about the prospects of restarting negotiations for the Middle East peace process, the situation in Syria, Iran’s nuclear program, the stabilization of Afghanistan, and North Korea.

They also discussed global challenges, including the fight against climate change and trade issues, such as the establishment of a free-trade area between the United States and the European Union.

Finally, Mr. Kerry and Mr. Fabius reflected on the strong nature of the French-American relationship, as much on the economic front as in terms of cultural, academic, and scientific exchange.

From left to right: John Kerry, US Secretary of State, and Laurent Fabius, French Minister of Foreign Affairs

Click here to see a video of the press conference.