Jean-Louis (Fabrice Luchini) and his neurotic socialite wife Suzanne (Sandrine Kiberlain) live a conventional bourgeois life in an elegant apartment building. The couple’s world is turned upside down when they hire a Spanish maid Maria, who joins five other sassy se?oritas in the servants’ quarters on the building’s sixth floor. Through Maria, Jean-Louis is introduced to an alternative reality and befriends the group of Spanish maids who teach him there’s more to life than stocks and bonds. This comedy "has the rare gift to put you in a very cheerful mood" (Le Journal du Dimanche).

Join us for an opening night reception in Bravo preceding the screening. MFA members, seniors, and students $32; general admission $37.
Film only: $9/$11 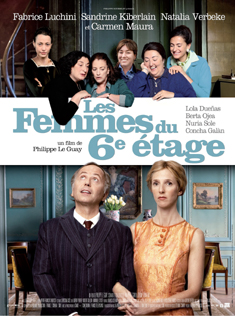