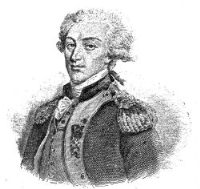 May 20th marks the day that Boston celebrates one of America’s heroes and a cornerstone in the Franco-American friendship. This tradition started in 1935 when a law was enacted wherein the Governor of the Commonwealth declared this day to honor Marquis de Lafayette.
After a rendition of La Marseillaise from a choir of students from the International School of Boston Chorus, the Ancient and Honorary Artillery Company of Massachusetts presented its commemoration. Both of these performances were followed by a series of remarks. President of the Friends of Lafayette and author of Lafayette in America, Alan Hoffman’s speech was broad in scope and deep in detail. He then introduced the Consul General of France Fabien Fieschi, who is celebrating his first Massachusetts Lafayette Day.

General Lafayette was a friend of America and a war hero; America recognizes this man with innumerable streets, plazas, malls, lakes, etc. named for him. He was heavily involved in the gift of the Statue of Liberty, and hailed as a hero on each of his tours through the New England area, particularly on his farewell tour in 1825. The historical factoids about Lafayette are many and each astounding. One such story is illustrated in the children’s book, A Cheese for Lafayette by Elisabeth Meg and Helen Belkin, which depicts a time when a 500 lb cheese was prepared for this Frenchman. All together, these stories paint the picture of a Franco-American hero beloved on both sides of the Atlantic.

The Consul General of France to New England Fabien Fieschi then further emphasized the importance of Lafayette’s necessary contributions to the connection between France and the United States. Particularly in Boston, this sentiment is appreciated and reciprocated.

After a short recess, the procession of Francophiles and Lafayette admirers walked down from the state house to the Common. It ended at a statue marking the Lafayette Mall with two flags waving their red, white, and blue: one American and one French. In attendance was the children’s choir again singing La Marseillaise, the Captain Poole, in full uniform from the Revolutionary War, various Representatives of the Commonwealth of Massachusetts, the Consul General and others interested in honoring this day. At the statue of Lafayette Mr. Hoffman made some closing remarks before the General Consul and the founder of the Massachusetts Lafayette Society laid the wreath down for a moment of silence.

After gathering for a celebratory picture, the ceremony ended with a luncheon in honor of May 20th, Lafayette Day in Boston.


Have a look on the Lafayette Society’s website:
http://www.lafayettesocietyma.com/index.htm