Home > Laurent Fabius at the Bonn negotiation session on Climate

Laurent Fabius at the Bonn negotiation session on Climate [fr]

Laurent Fabius, COP21 President, visited Bonn on October 20th for the last negotiation session with the 196 parties (ADP international working group) before the opening of the Paris Climate Conference. The goal was to make progress on developing an ambitious and balanced draft agreement. 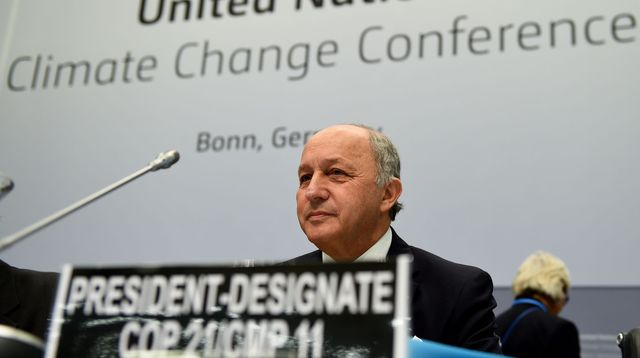 Laurent Fabius held consultations with all of the heads of delegation. He notably presented the results of the informal consultations hosted by the French presidency at the level of ministers and heads of state and government. He met with Christina Figueres, Executive Secretary of the UN Framework Convention on Climate Change and Ahmed Djoghlaf and Daniel Reifsnyder, Co-Chairs of the ADP working group.

The minister reaffirmed the French presidency’s determination to work in a transparent manner in cooperation with all parties involved. He urged the participants to seek the necessary compromises without delay in order to reach an agreement at the Paris Climate Conference.

Read more on climate at: http://www.diplomatie.gouv.fr/en/french-foreign-policy/climate/