I suggested we meet here this evening because this is a crucial moment in the Syria crisis, one that requires determined commitment from the friends of the Syrian people.

After a 13-month-long, indiscriminate, bloody crackdown that has claimed more than 11,000 lives and is destabilizing the entire region, the Security Council finally agreed, last Saturday, on a resolution – UNSCR 2042 – supporting Kofi Annan’s mission and calling for the deployment of blue helmets in Syria. It must be implemented completely; any backtracking would be disastrous.

The Annan plan is the chance for peace, a chance not to be missed. The opposition has fulfilled its obligations under the Annan plan, which it welcomed through the SNC. The groups present on the ground – the coordination of which has been made very difficult due to the crackdown – have respected the ceasefire despite the Syrian regime’s provocations. I want to pay tribute to the Chairman of the Syrian National Council, which has taken a responsible attitude of full support for the Annan plan, despite the difficulties on the ground.

As the United Nations Secretary-General emphasized in his letter to the Security Council yesterday, and as M. Guehenno, Mr Annan’s deputy, stressed this very morning to the Security Council, the same cannot be said of the Syrian regime. It is shamelessly continuing the crackdown, which has again claimed dozens of lives since the date set for the ceasefire to come into force. Nine days after the deadline set by Kofi Annan, the immediate implementation measures haven’t even been carried out: the Syrian army has conducted only sham withdrawals, and heavy weapons fire is continuing. Refugees are flowing to the borders by the thousands, and the prisons are full of thousands of innocent people. 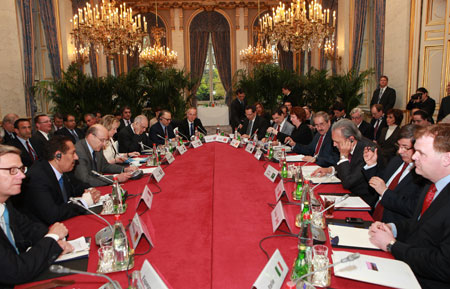 How can we ensure Bashar al-Assad fulfils his international obligations? I propose to you that our meeting should send a very strong message to Syria, the Syrian people and the United Nations.

1) We’ll step up our pressure, particularly through sanctions: that was the purpose of the international meeting I opened in Paris the day before yesterday, at which 57 states and organizations, including yours, were represented. That meeting led to positive conclusions on the need to implement the sanctions decided and a determination to increase operational exchanges so as to enhance those sanctions’ effectiveness.

2) We’ll encourage the Security Council to deploy as soon as possible a robust and credible observer mission: several hundred men, who must have the ground and air resources to assess clearly the effectiveness of the Annan plan’s implementation. Both the United Nations Secretary-General and his Special Envoy rightly emphasize that no obstacles must be put in the way of the mission’s freedom of movement. It’s crucial that the blue helmets have all the necessary means to accomplish their mission.

3) We’ll take steps to persuade all those countries who haven’t yet done so to suspend all support to the Syrian regime, particularly in terms of weapons, because they’re undermining the Annan plan by encouraging Bashar al-Assad to intensify the crackdown.

4) We reiterate our support for the opposition – the opposition that wants a free, democratic Syria respectful of minorities: France supports the efforts of the Syrian National Council, which is making efforts to reform and to lay the foundations for unifying all strands of the opposition.

5) We solemnly call on all countries, in particular the members of the Security Council, to demand that the Syrian regime immediately and fully implement the Annan plan.

That plan isn’t limited to a ceasefire: it’s a comprehensive plan, all of whose elements are inextricably linked and which must lead to the establishment of a political transition at the end of which the Syrian people will be able to choose their destiny freely. I want to remind you that the plan also includes the release of prisoners, respect for the freedom to demonstrate – still flouted just as much by the Syrian regime – and humanitarian access. In this area, France has created a €2-million fund, a major part of which has already been released.

We’ll continue to provide concrete assistance to the millions of Syrians who are suffering the tragic consequences of the Syrian regime’s mindless policy.

6) In conclusion, we can’t wait: time is running out. The observers must be deployed quickly and must be able to operate without any hindrance. If that’s not the case, we should examine what other options are open to the Security Council and the international community. *** The Annan plan is a guarantee of peace and freedom. Its failure would be the road to civil, even regional war. Let’s be capable of shouldering our responsibility. Let’s combine our efforts, those of the Arab League, those of the Friends of Syria Group and those of the Security Council, whose credibility is at stake.

I welcome your commitment to resolving the Syria crisis, demonstrated in the international forums as well as at the Tunis and Istanbul conferences and once again reflected in your presence in Paris today.

On behalf of President Sarkozy and of France, I thank you for coming here to Paris to work towards the Syrian people’s liberation./.