The Office of Science and Technology is excited to share a clip (in French) from its 29th Café de Sciences event with Olivier de Weck, Associate Professor from MIT’s Department of Aero/Astro Engineering.
Prof.Olivier de Weck feedback 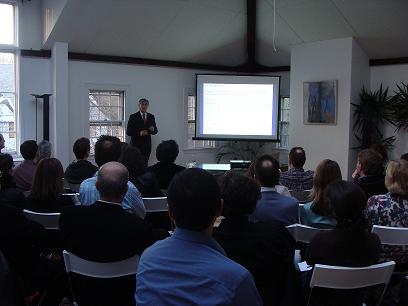 Prof. Peter Libby is director of the cardiovascular medicine department at Brigham and Women’s Hospital in Boston. He is also the "Mallinckrodt" Professor of Medicine at the Faculty of Medicine, Harvard University (HMS). He directs the Cardiovascular Clinical Research Center DW Reynolds at Harvard.

At the event, the consul received about 60 attendees at the Residence of France who enjoyed Prof Libby’s eloquence.
The audience was astonished by his perfect French in this specialized field.

Thank you to Prof Libby for his marvellous speech! 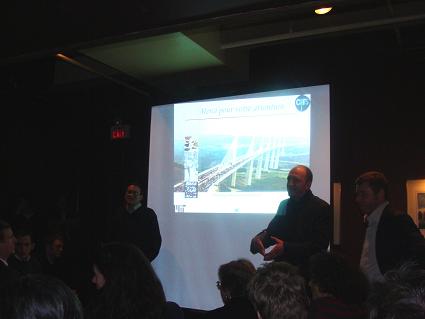 This event gathered about 30 French speaking people at John Harvard’s Brew House. Organized the first time at this location, it was an enlightening and convivial moment.

Roland J.-M. Pellenq is the research director at CNRS in the Interdisciplinary Nanoscience Center in Marseille (France). Since 2008, he has been a visiting Professor in the Department of Civil and Environmental Engineering at MIT. He is one of the creators of Concrete Sustainability Hub (CSH @ MIT) center opened in late 2009 and dedicated to basic research on concrete.

Franz-Josef Ulm is a Professor in the Department of Civil and Environmental Engineering at MIT. With Prof. Pellenq, they have contributed to decoding the molecular structure of the concrete, at the end of 2009. 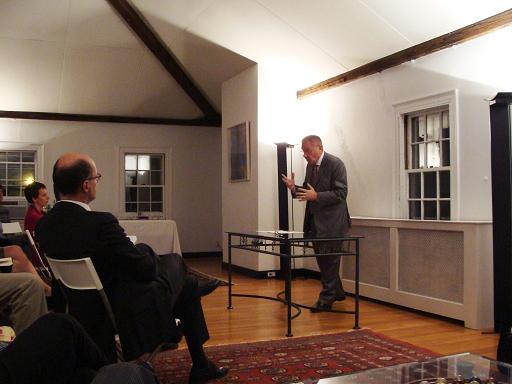 We were honored to welcome Professor Jean Pierre Bourguignon, director of at the Institut des Hautes Etudes Scientifiques of Bures-sur-Yvette, France, to the Residence of France. From his experiences as a mathematician, professor and director of an independent research institute (private foundation), Professor Bourguignon shared with us his concern and frustration with the risks involved in the development of research organization in some countries. 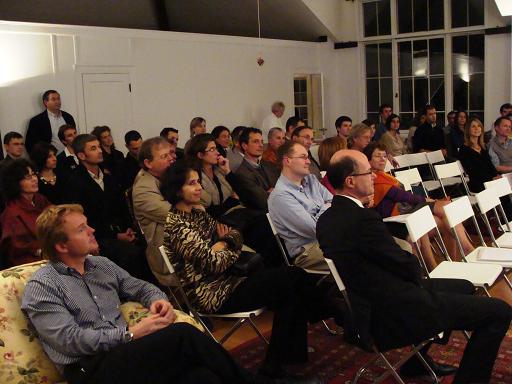 The 18th “Café des Sciences” took place on April 29th at the “Résidence de France” with the President of Northeastern University, Professor Joseph Aoun. This event gathered 40 French speaking scientists in the Boston area who came listen to President Aoun and to networkwith each other.

The President of Northeastern University, Professor Joseph Aoun, was the speaker at the 18th “Café des Sciences”, which took place at the Residence of France on April 29, 2009. He talked about Northeastern’s original focus and its future plans.

Joseph E. Aoun, an internationally known scholar in linguistics, is the seventh president of Northeastern University—a preeminent global, experiential, research university. Since his presidency began in August 2006, he has charted an ambitious and distinctive course to advance Northeastern. At the heart of his vision is a commitment to strengthen the University’s leadership position in experiential and cooperative education; create global programs with an urban perspective; foster a research environment where faculty uncover solutions to real-world problems; and build innovative partnerships so that Northeastern can better serve its students, its city, the nation, and the world.

President Aoun presented an overview of the American university system from education to research and deepened the Northeastern concept. Then he answered the numerous questions from attendees who were very interested in this topic.

“Café des Sciences” is a monthly event aiming to gather the French speaking scientific community. Organized around a speaker who presents his activity and experience in the USA, it strengthens the community and structures a network.
You can join the network on Facebook,
http://www.facebook.com/inbox/?ref=mb#/group.php?gid=18146058072
Which is supported by:
Hubtech 21
Swissnex
FACCNE, French American Chamber of Commerce
Office for Science and Technology of the French Consulate in Boston

If you want to see some pictures of the event, please have a look to the flickr page of the French Consulate in Boston.