Mr. Edmund Lopes is decorated with Legion of Honor Medal 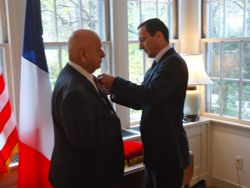 From left to right: Mr. Lopes receives the Legion of Honor Medal from Fabien Fieschi, Consul General of France

Fabien Fieschi, Consul General of France, honored Mr. Edmund J. Lopes with one of France’s oldest and most prestigious medals, the Legion of Honor, exclusively awarded in cases of exemplary military and civilian services. 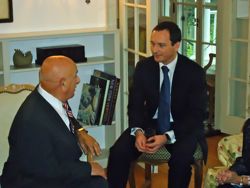 From left to right: Mr. Lopes and Fabien Fieschi, Consul General of France

Mr. Lopes joined Company C of the 112th Infantry regiment on November 22, 1943. As a scout and gunman, he participated in the famous landing at Normandy and the subsequent battles to regain French territory in 1944. After his regiment fought to liberate the town of St. Lo, Mr. Lopes joined the 112th Infantry regiment, whose men became widely known for their extraordinary acts of heroism. Their courage, especially during the battle of the Ardennes (Battle of the Bulge), has been recognized with presidential citations, and it is also during this battle that Mr. Lopes was injured and earned the prestigious Purple Heart medal. 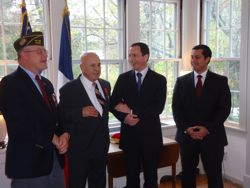 It is for this extraordinary sacrifice that Mr. Lopes was awarded the title of Chevalier of the Legion of Honor, a recognition that symbolizes the profound appreciation of France for the American veterans of World War II.

For his incredible bravery during the campaigns of Normandy, northern France, and the Ardennes, Mr. Lopes has been decorated with medals such as the Good Conduct Medal, the European-African-Middle Eastern Theater Campaign Medal, the Victory Medal, and the Bronze Star with a bronze arrowhead and a Presidential Unit Citation.

Today France continues to be grateful to American veterans for their efforts during the decisive campaign of Northern France. Their contributions are exemplary models for all future generations, especially since both French and American troops are still engaged in the fight for freedom in other parts of the world, such as today in Afghanistan. Thanks to the sacrifices of men and women such as Mr. Lopes, France and Germany have become today among the closest partners in the world, and the notion of war in Western Europe has become unthinkable.