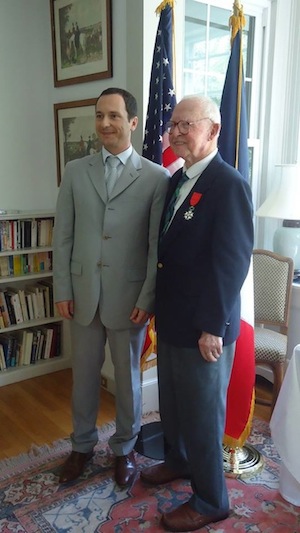 Mr. Alvord joined the army in 1941, a recent graduate from Harvard College, following the call of President Roosevelt. He was initially working in intelligence work, but when his brother died in the Battle of Midway as a Marine aviator, he volunteered for ship duty. He was assigned to Landing Ship Tank #133. As such, he landed in France for the first time on the beaches of Normandy on June 6, 1944.

The boat for which he was executive officer, LST #133 is believed to be the first ship to land on the beach and struck a mine on its third trip to Omaha Beach, after which it still offloaded the soldiers it carried. For his bravery during World War II he has been awarded the American Defense Medal, the American Campaign medal and the European African Middle Eastern Campaign Medal and one star for the invasion of Normandy.

Today Mr. Alvord lives in Kittery Point, Maine with his wife Jean. He had a successful career as a High School teacher for Portsmouth (N.H.). Having been to France many times since his service, he maintains a love and respect for the French people. His first time back at the beaches of Normandy in 1970, when he was overcome with emotion.

In order to honor and remember such incredible sacrifice, France presents the Legion of Honor. Emperor Napoleon Bonaparte established this award in 1802 to recognize exemplary military and civilian services and is the oldest as well as highest honor in France. Mr. Alvord’s service and courage perfectly match the description of this award, and the Consul General, in the name of the President François Hollande, presented it to him in a quiet ceremony.

Today France continues to be grateful to American veterans for their efforts during the decisive campaign of Northern France. Their contributions are exemplary models for all future generations, especially since both French and American troops are still engaged in the fight for freedom in other parts of the world. Thanks to the sacrifices of men and women such as Mr. Alvord, France and Germany have become today among the closest partners in the world, and the notion of war in Western Europe has become unthinkable.