This morning, July 1, 2013, Consul General Fabien Fieschi presented Mr. Joseph Parks with the Legion of Honor, France’s oldest and most prestigious medals for his service during World War II in France. 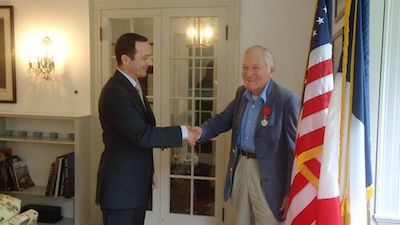 Mr. Parks served in the American Army during World War II from December 6, 1943 and was a member of the 36th Division of the 141st Infantry Regiment. His division was stationed in Northern France and the Ardennes. While crossing the German border, Mr. Parks was injured in battle in Bruyères, had an operation in Haguenau and was then transferred to a military hospital where he stayed for the remainder of the war. For this injury he was presented with a Purple Heart and his entire unit was given a Presidential Citation for its courage in battle. 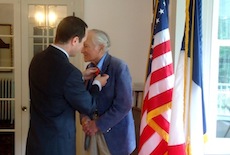 In order to honor such sacrifice, France presents the Legion of Honor. Emperor Napoleon Bonaparte established this award in 1802 to recognize exemplary military and civilian services and is the oldest as well as highest honor in France. Joseph Parks’ service and courage perfectly match the description of this award, and the Consul General, in the name of the President François Hollande, presented it to him in a quiet ceremony on July 1st.

France continues to be grateful to American veterans for their efforts during the decisive campaign of Northern France. Their contributions are exemplary models for all future generations, especially since both French and American troops are still engaged in the fight for freedom in other parts of the world. Thanks to the sacrifices of men and women such as Mr. Parks, France and Germany have become today among the closest partners in the world, and the notion of war in Western Europe has become unthinkable. 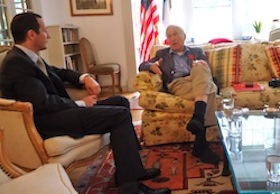