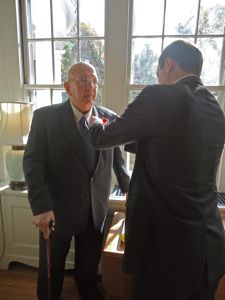 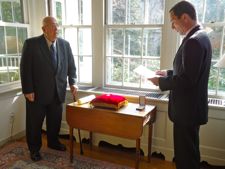 From left to right: Mr. Richard Pinardi and Fabien Fieschi, Consul General of France in Boston

From left to right: Fabien Fieschi, Consul General of France, and Mr. Pinardi

At only 18 years old, Mr. Pinardi became one of the original members of the 721st Squadron of the 450th Bomb Group, and he participated in many aircraft missions during the dangerous yet decisive campaigns of Normandy, Northern France and Southern France.

As an aerial photographer, Mr. Pinardi was often on the final aircraft in the line of planes during bombing missions, tasked with photographing the damage in the target area after each mission. His photographs serving as indisputable information on the war front, he provided military officials with the necessary knowledge for planning the subsequent operations of the Allied forces. When his plane was shot down over Austria in 1944, Pinardi was captured by the Germans as a prisoner of war, and he was a survivor of the 86-day Death March to Poland. 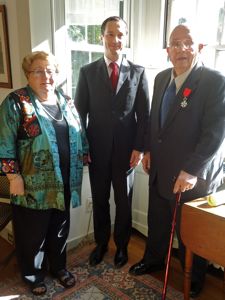 For his extraordinary bravery and personal sacrifice during World War II, Mr. Pinardi has been awarded numerous medals, including the Purple Heart medal, the Prisoner of War medal, the Air Medal, the European-African-Middle Eastern Campaign Medal with one Silver Star and four Bronze Service Stars, and the World War II Victory Medal.

With the Legion of Honor medal, France continues to show its gratitude to American veterans for their incredible efforts during the victorious Allied campaigns to liberate Europe. Thanks to the sacrifices of soldiers such as Mr. Pinardi, France and Germany have become among the closest partners in the world, and the possibility of war in Western Europe has become unthinkable.