Kingston, R.I. – July 28, 2014 – The French echoed in Quinn Hall was so rich and intense the conversations could have happened in a Paris café or on a sidewalk in Quebec.

Instead, the banter among 43 university instructors {{}} and middle and high school teachers, including a dozen from Rhode Island, were part of “Université d’été du Rhode Island.’’ Sponsored by the Cultural Services of the French Embassy in Washington, D.C., the General Consulate of France in Boston and URI’s French department, the program was the first French immersion workshop at URI. It was a complete success.

These recounts of several of the instructors that attended the event attest to the success of the event:

"It was important for us in the French program here at URI to host this workshop,’’ said Lars Erickson, a professor of French and director of the French International Engineering Program. “It’s a way to help promote and advance the teaching of French throughout Rhode Island and beyond. All the feedback I’ve received from the participants has been positive. I hope we can work with the French Embassy and Consulate to host the Université d’été again.’’

Coleen Griffith, of Charlestown, department chair of languages at Pilgrim High School in Warwick, also speaks and teaches Spanish, as well as French. With her French just a bit rusty, she said the weeklong session helped refresh her French pronunciation.

“It’s a true workshop,’’ she said. “You come, the ideas are presented to you and then there is a flow of ideas from all the people. The exchange is great. As department head, I have to model things. So if there are different ways of looking at things and doing things, this workshop gives me some ideas to bring back to my department members.”

Lydia Smith, of Warwick, a French teacher at Gorton Junior High, also in Warwick, felt the same way. Smith signed up for the classes to improve her strategies for teaching standard French pronunciation and learn creative ways to teach the same lessons again and again, while keeping students engaged.

“I wanted to get more ideas of how to make my students want to talk and, even if they are making mistakes, how to get them to talk and say the words they know,” Smith said. “I also wanted to get ideas on how to have student-led activities.”

The URI workshop made her a better French teacher, Smith said. She learned different ways to make studying French stimulating.

Smith and Griffith said the week was fun, especially since they did not have to worry about doing paperwork at the end of the day like they would during the school year.

“We can just sit here and learn,” said Smith.

Even program instructor Aurore Mroz, a professor at Colby College, said she was not just training others, but also picking up teaching strategies for her benefit.

“Just because I’m the trainer doesn’t mean I’m not learning because I am clearly learning from them, too,’’ she said. “Part of what I do is prepare students to become teachers so this program is also re-training for me.”

Griffith and Smith have already exchanged phone numbers to keep in touch. As for their fellow classmates, they’ve created a Facebook group to share ideas and provide support – just like they did at URI. 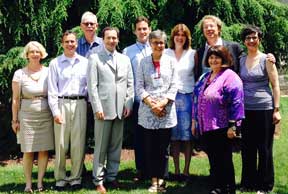 Thank you Rachel Smith, a graduate assistant for the URI Marketing & Communication Department for writing this release. http://www.uri.edu/news/releases/?id=7142