November 10, Philippe Vasset at "France and the World" Lecture Series

Come and hear French thinkers at the Mahindra Humanities Center at Harvard for the lecture series "France and the World"! After philosophers Marc Crépon & Barbara Cassin (October 28th), participate in the conference on November 10 at 6 pm, “Pourquoi s’en faire: Being a French Writer”, with Philippe Vasset, novelist, editor-in-chief of Africa Intelligence and Intelligence Online. 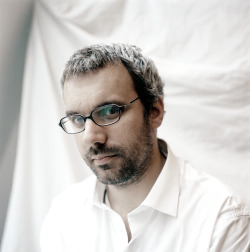 Philippe Vasset is a novelist, former private investigator in the United States, journalist and editor whose studies, novels and life have all revolved around the concept of geography - he has dubbed his unusual style of writing "exofiction" while reviewers have suggested that he may be forging a new genre of geographical literature. He will discuss the ins and outs of being a writer, following the publication of his latest novel, La Conjuration, in 2013.

For more information on the the lecture series "France and the World"!, click here.