Home > Now Playing: “Chinese Puzzle” by Cédric Klapisch on the (...)

Now Playing: “Chinese Puzzle” by Cédric Klapisch on the screens!

“Chinese puzzle”, the last movie of the French director Cédric Klapisch’s trilogy will be opening tomorrow at the Landmark Kendall Square (Cambridge) on Friday 30, at 11:10AM. 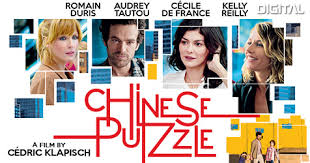 Years after L’Auberge Espagnole and Russian Dolls, Xavier (Romain Duris)’s life is still a mess. His ex-girlfriend, Wendy (Kelly Reilly) has left him in Paris and taken their kids to New York. Always up for an adventure, Xavier decides to follow them and settles in NYC in order to piece together a life for himself amidst the cheerful chaos of Downtown Manhattan. An imminent deadline for his new novel, the realities of immigration, and old friends Martine (Audrey Tautou) and Isabelle (Cécile de France) add to the vibrant jumble in this delightful conclusion to director Cédric Klapisch’s trilogy.