After his tenure as Artist-in-Residence at the Isabella Stewart Gardner Museum (25 Evans Way Boston, MA) in 2011, celebrated French artist Jean-Michel Othoniel, world-renowned for his monumental blown-glass sculptures, returns with an exhibition of new works of sculpture, drawing and photography entitled Secret Flower Sculptures.

A site specific sculpture, Peony, The Knot of Shame, will be suspended from the ceiling in the Museum’s Hostetter Gallery alongside four new paintings and a presentation of his 2015 Versailles project. Outdoors near the gallery will be a companion sculpture, La Rose des Vents, a gold aluminum kinetic sculpture made to capture and reflect sunlight in all directions as it turns in the wind.

During his residency, Othoniel discovered an 18th century book at the Boston Public Library called The Art of Describing Dance by Raoul-Auger Feuillet about ballet choreography and performances during Louis XIV’s reign in France. The book, its drawings, and time at the Museum inspired him to draw concepts for three fountain sculptures, Les Belles Danses (The Beautiful Dances) for Versailles’ Water Theater Grove which opens May 12. It will be the first permanent contemporary sculptures in the Versailles gardens in 300 years. Othoniel won the competition with French landscape designer Louis Benech. Several of the drawings made in Boston will be exhibited along two bronze models of Les Belles Danses, and the library will loan Raoul-Auger Feuillet’s original book to the Museum for the exhibition.

For Secret Flower Sculptures, Othoniel also assembled his own personal tour of the Gardner Museum and created a book, The Secret Language of Flowers, in which he explores the symbolic meaning of flowers in the Gardner collection and from other collections around the world through drawings and pictures. His passion for flowers and their meaning informed his view of the Museum’s collection as a beautiful garden. 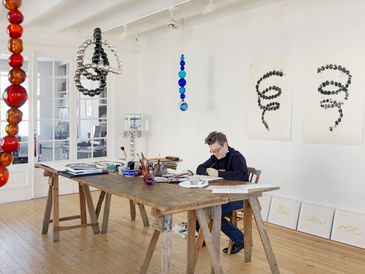 Jean-Michel Othoniel lives and works in Paris. He works mainly with glass, depicting its timelessness as well as its paradox of fragility and strength. He began working with glass in the early 1990s after being introduced to some of the finest glassmakers in Murano, Italy. From 1996, he began creating artworks for specific places – hanging giant necklaces in the gardens around the Villa Medici in Rome and from trees in the gardens of the Peggy Guggenheim Collection in Venice. In 2000, he had an invitation to transform a Paris subway station into a double crown of glass and aluminum for his work, Le Kiosque des Noctambules. In 2004, he exhibited his freestanding glass necklaces at the Musee du Louvre, and in 2011, he had an important retrospective, “My Way,” at the Centre Pompidou in Paris which moved onto the Leeum Samsung Museum of Art/Plateau in Seoul, the Hara Museum of Contemporary Art in Tokyo, the Macao Museum of Art in China, and the Brooklyn Museum of New York.